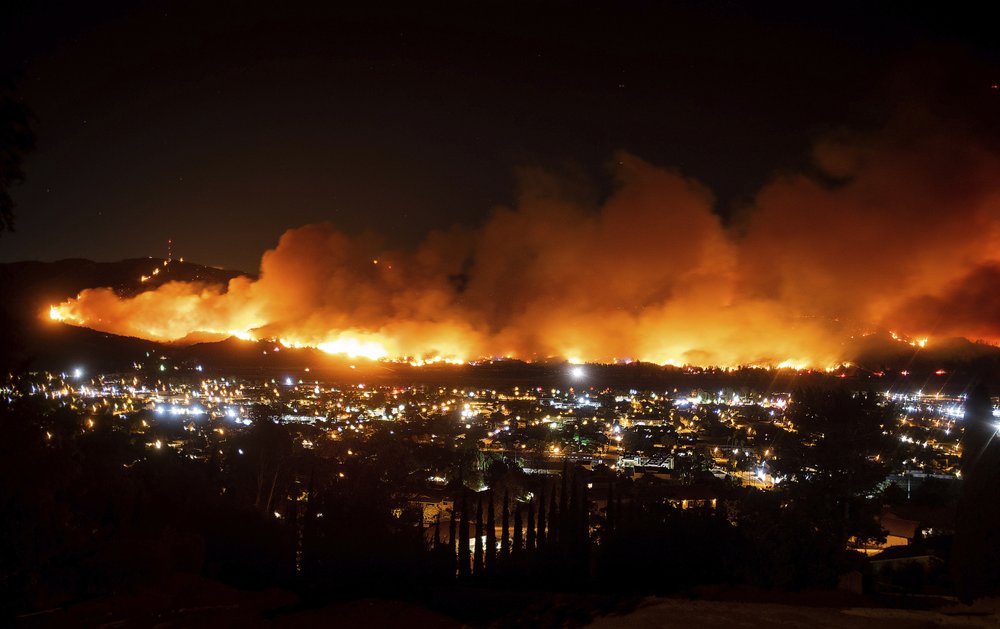 Pacific Gas & Electric is still operating a rickety power line near the one that ignited a 2018 wildfire that wiped out the Northern California city of Paradise and killed 85 people, according to an expert inspection conducted as part of a legal claim.

In an inspection just two months ago, an expert hired by the wildfire victims’ attorneys found a power line with rusty equipment and some parts w ere wrapped with what appeared to be electrical tape for nearly a year.. The expert compared the power lines to a year earlier and found the safety concerns remained. PG&E was alerted about the potential hazards on the Cresta-Rio Oso line before the findings were made public Thursday, according to the victims’attorneys.

The potential hazards were spotted along a transmission line known as “Cresta-Rio Oso,” about 100 yards (91 meters) ) from another line, known as Caribou-Palermo. A rusting piece of equipment that failed in 2018 on the Caribou-Palermo line has been blamed for causing the fire that destroyed thousands of homes and other buildings, mostly in Paradise.

Both the Cresta-Rio Oso and Caribou-Palermo lines are located in a canyon running along the Feather River in Butte County, about 25 miles (40 kilometers) from Paradise. PG&E had temporarily turned off the Cresta-Rio Oso line for maintenance before the destructive fire caused by the Caribou-Palermo line, which has since been permanently deactivated.

In a statement, PG&E said it re-inspected the problems flagged by the victim’s expert and determined there were no immediate safety issues. But the utility also acknowledged some of the equipment needs to be fixed and and is still trying to schedule a time to turn off the Cresta-Rio Oso line so it can make the necessary repairs.

“We take questions about our infrastructure seriously because safety is our most important responsibility,” the San Francisco company said.

But the latest findings may raise further doubts about PG&E’s commitment to safety at time the company is trying to persuade California Gov. Gavin Newsom that the company has turned over a new leaf as it tries to emerge from a bankruptcy case stemming from more than $50 billion in claimed wildfire losses. Newsom has threatened a government takeover bid of PG&E unless the company proves it can operate more safely. The governor’s office didn’t respond to a request for comment Thursday.

A federal judge has also been pressing the utility to provide evidence that it has improved its safety practices and is thoroughly inspecting its transmission lines to reduce the risks of future fires.

U.S. District Judge William Alsup is overseeing PG&E as part of a five-year criminal probation imposed after the utility’s natural gas lines triggered a deadly explosion in 2010. A federal jury found the company guilty of five counts of safety violations and the one count of obstruction.

Alsup responded swiftly after being informed about the potential problems on the Cresta-Rio Oso line in a letter from the expert inspector. He issued an order Thursday telling PG&E to be prepared to discuss the evidence during a Feb. 19 hearing in San Francisco.

PG&E has repeatedly said it has learned from past mistakes, prompting the company to intensify the inspection of 18,000 miles (29,000 kilometers) of overhead power lines in a service territory in Northern California that provides electricity to 16 million people.

In its statement, PG&E said it has inspected 730,000 transmission and distribution lines, as well as power substations, while examining about 25 million electrical components in areas highly susceptible to wildfires during a four-month period. The utility said it has already repaired parts of its system that posed an immediate danger to the surrounding community. The tape on the Cresta-Rio Oso line may have been left after a previous repair and no longer serves any purpose, according to PG&E.

Even so, the nation’s largest utility has also publicly acknowledged that its electrical grid needs so many upgrades that it will probably have to deliberately turn off the power periodically during hot and windy conditions when power lines can topple and start wildfires for at least a few more years in parts of Northern California to minimize fire risks.

While overseeing PG&E’s probation, Alsup has already expressed skepticism about the utility’s ability to detect safety hazards, despite its reassurances. He was particularly troubled by the company’s admission that a cable that had been inspected in July subsequently had detached from a transmission tower and may have caused another fire in Sonoma Couny last October. “What good are inspections that don’t find problems?” Alsup asked in a series of requests he made of the company in a Tuesday court filing.

The victims lawyers hired an expert, who they declined to identify, when they were preparing for a trial scheduled this year to help determine PG&E’s liability for the Paradise fire. But the trial became unnecessary when PG&E and the victims’ lawyers agreed to a $13.5 billion settlement covering the Camp Fire and other catastrophic wildfires in 2017.

Still, the victims remained worried about future wildfire risks posed by the PG&E power lines near their communities.

“We could not bear the thought of another Camp Fire,” he said.