Clinging to each other for every last second, elderly North and South Korean family members allowed to meet for the first time in nearly seven decades bid tearful farewells Wednesday, probably forever.

Millions of people were swept apart by the 1950-53 Korean War, which left the peninsula split by the impenetrable Demilitarized Zone (DMZ) and separated brothers and sisters, parents and children and husbands and wives.

Over the years most have died, and fewer than 60,000 South Koreans remain alive who have registered to meet their Northern kin at the occasional cross-border reunions -- this week's are the first in three years.

Those survivors lucky enough to be chosen to take part -- 89 families this time, with a similar number to follow later this week -- must cram a lifetime's relationship into just three days. 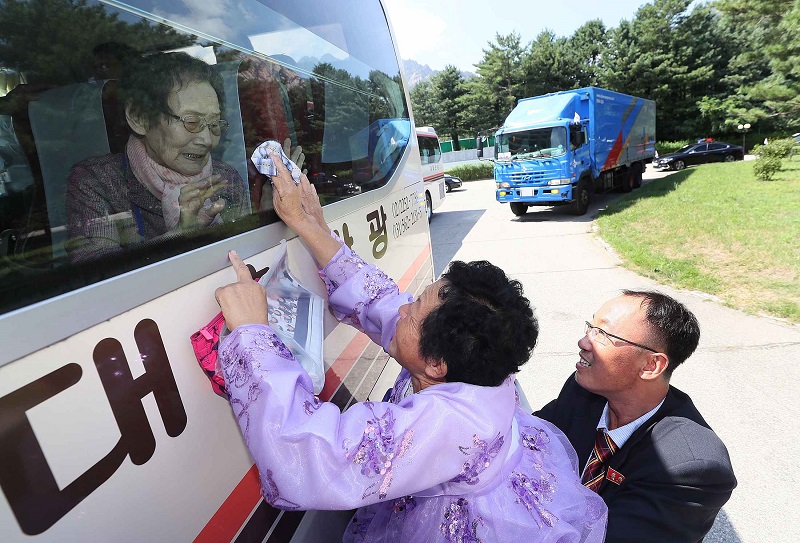 The first batch of reunions ended on Wednesday, and bidding farewell was a hard moment, with many shedding tears as they waved goodbye to the buses shuttling relatives to the south of the border. (Photo: VCG)

When they come to an end, the realities of age and the nuclear-armed North's isolation mean they are unlikely ever to see each other again.

The relatives burst into tears when a loudspeaker announcement in a banqueting hall at the North's scenic Mount Kumgang resort declared: "The reunion is over."

One of the oldest people taking part, 99-year-old Southerner Han Shin-ja, was ushered towards the door but refused to take a step further, hugging her two Northern daughters and crying.

"Mother! Mother!" wept her children, both of them in their seventies.

Han was the last Southerner to leave the room, where North Koreans remained scattered, dazed and in tears, with waitresses also crying as they removed the used plates.

Southerner Lee Ki-soon, 91, held his Northern son tightly in his arms, smiling broadly and telling him: "I'm not fake. You have a father."

Others could not bear to look each other in the eyes.

The intensely emotional meetings symbolise the pain of the division of the Korean peninsula.

Wartime hostilities ceased with an armistice rather than a peace treaty, leaving the two Koreas technically still at war and with all direct civilian exchanges -- even mundane family news -- banned.

The reunions were halted for three years as relations worsened with the North accelerating its pursuit of nuclear weapons and ballistic missiles.

But after a rapid diplomatic thaw the North's leader Kim Jong-Un and the South's President Moon Jae-in agreed to restart them at their first summit in April in the DMZ.

In a short report on the reunions, the North's state-run KCNA news agency said the family meetings took place "as part of the practical measures being taken to implement the Panmunjom declaration," referencing the meeting between Kim and Moon.

"Our side met their flesh and blood from the south and exchanged their inmost thoughts in a happy homely atmosphere," the report added.

Kim and US President Donald Trump also held a landmark summit in Singapore in June, but Pyongyang has yet to make clear what concessions it is willing to make on its nuclear arsenal. 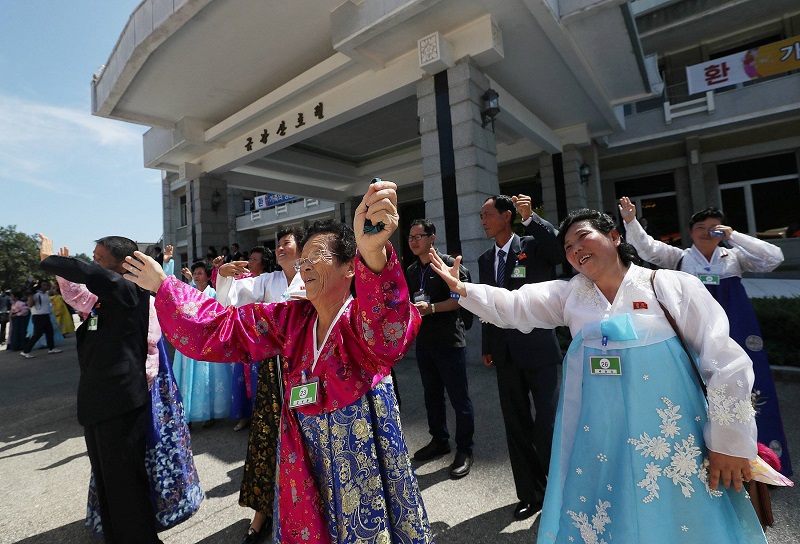 The meet-ups are part of an agreement reached by DPRK leader Kim Jong Un and ROK President Moon Jae-in during their historic summit this April. (Photo: VCG)

As the morning session began, South Korean Kim Byung-oh, 88, started to sob as soon as his younger sister joined him at the table.

"Brother, don't cry. Do not cry," she said, squeezing his hands hard, but his tears kept flowing, before his sister -- who had bitten her lips to try to stay calm -- also broke down.

They squeezed each other's hands, without saying a word, for nearly 10 minutes.

"I didn't know my father would cry this much," said Byung-oh's son.

Many drew family trees on pieces of paper and exchanged relatives' names and photos, according to South Korean pool reports.

After the South Koreans boarded buses to take them back across the DMZ, their Northern relatives -- all wearing the ubiquitous badges of the country's leaders, and many of the women in traditional Korean dresses -- were allowed out to wave them goodbye.

Some pressed their hands to the coach windows and others ran alongside the vehicles, straining for a final glimpse of their loved ones.

"Let's meet in Pyongyang after unification," said one.