WASHINGTON, Nov. 6 (Xinhua) - US voters began to cast their ballot in the midterm elections as the first polling stations opened Tuesday morning. 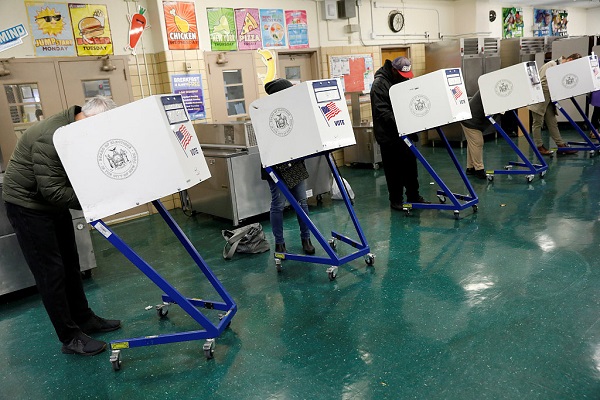 At a polling station in Arlington, Virginia, dozens of voters weathered the cold to line up before the doors opened.

Robin Sparrow, a resident in Arlington who identified himself as a Democrat, said issues including healthcare and immigration drove him to the polls.

"It's really about bringing some normalcy to our politics and rhetoric that we have going on in the United States," Sparrow told Xinhua.

In Virginia's Fauquier County where Donald Trump won a landslide victory in the 2016 presidential election, Republican voter Butch Johnson told Xinhua that he gives the GOP credit for the U.S. economy but expects more unity.

"I think there's a lot of room for improvement," Johnson said. "I think we need some unity and we need to come together."

The elections will determine which candidates fill 35 Senate seats and all 435 seats of the House in the next Congress, as well as 36 governorships and thousands of state-level official positions. The result of the elections will likely draw the trajectory of U.S. politics for the next two years.

The Republican Party now holds a majority in both chambers of the Congress. Most polls conducted before the vote projected the Democratic Party to take the House while the Republican Party to keep control of the Senate, but an abundance of neck and neck races make the final result difficult to predict.

Against the backdrop of a divisive political atmosphere in the country, an unprecedented amount of participation was witnessed in this year's midterms, with both early voting numbers and the amount of donations made to candidates breaking records.

A recent poll indicated that 37 percent of voters believe this will be the most important election in their lifetimes, a rare sentiment for midterm elections, which are typically seen as being of less importance than presidential elections.