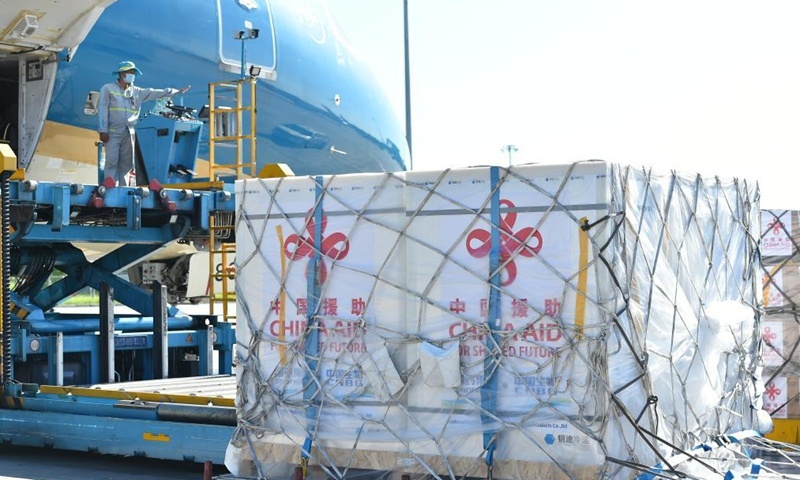 The Chinese Embassy is working with Vietnam's Ministry of Health on vaccination cooperation and the two sides agreed to inoculate Chinese nationals in Vietnam as soon as possible, said a release from the Chinese Embassy on Friday.

One day before, the embassy expressed concern over Vietnam's failure to distribute China-donated vaccines in accordance with previous plans.

On June 20, 500,000 doses of Sinopharm vaccines for COVID-19 donated by China arrived at Vietnam's capital Hanoi. Nguyen Thanh Long, Vietnam's minister of health, thanked China for offering this batch of vaccines and said that according to consensus reached by leaders of China and Vietnam, Vietnam will give priority to three kinds of people for vaccines, including Chinese in Vietnam, Vietnam people who need to work in China and people living in border areas of north Vietnam.

However, on Thursday, the Chinese Embassy reportedly expressed concerns to Vietnam as its deployment plan failed to abide by the previous consensus to give priory to those three groups of people. Vietnam then withdrew the distribution plan.

A Chinese national surnamed Ma, who has been living in Vietnam's Ho Chi Minh City for seven years, described his up-and-down feelings for the past days. "When I first saw news on the 'Spring Sprout' vaccine program being launched in other ASEAN countries, I was looking forward for it in Vietnam."

On March 7, Chinese State Councilor and Foreign Minister Wang Yi announced the launch of the "Spring Sprout" program at a press conference during the "two sessions." The Ministry of Foreign Affairs and Chinese diplomatic missions abroad have taken actions to help Chinese abroad get vaccinated. So far, more than 1.18 million overseas Chinese in more than 150 countries have been inoculated with Chinese or foreign vaccines, Chinese Foreign Ministry spokesperson Wang Wenbin told a press conference on June 10.

Given that Vietnam had put the COVID-19 under control, Ma said he thought no rush for getting vaccines. But entering May, with the epidemic's flaring up, Ma became more eager to see Chinese vaccines in Vietnam.

"When news came that China-donated vaccines had arrived, many Chinese were reposting the information on their WeChat Moment and thinking we can get the vaccines very soon. But a few days later, I saw the distribution plan released on Vietnam's local news website, which said that the vaccines have been distributed to provinces that suffered a severe epidemic," Ma told the Global Times on Friday.

Although the plan said that vaccines would still be given to those three groups of people for priority, there are almost no Chinese nationals living there, Ma said, noting that although Vietnam withdrew the distribution plan later, he lacks confidence in that Vietnam would fully keep the promise.

Another Chinese surnamed Miao who also lives in Vietnam, told the Global Times that it is China's shared aspiration to get Chinese vaccines as soon as possible.

Only 2.9 million Vietnamese were vaccinated as of Friday, according to the Health Ministry in Vietnam. And it has witnessed rising infections in recent days under a new wave of COVID-19.

Hanoi has approved the Pfizer and AstraZeneca vaccines, as well as Russia's Sputnik V. On June 4, it approved China's Sinopharm for use. Vietnam has relied mainly on AstraZeneca shots. In May, its Health Ministry reported a death from the AZ vaccine.

The incident sparked heated discussions on China's social media, with some Chinese netizens criticizing Vietnam for breaking its promises. Some netizens also made a comparison between Vietnam and Oman as a netizen named "Leavemealone" shared her mother's experience of getting inoculation in Oman.

The netizen said that the Chinese government sent vaccines to Oman to make sure that around 2,000 Chinese nationals who live in the country can get vaccines. The netizen also wrote that to show sincerity, the Oman government also sent the best doctors to inoculate the Chinese.

According to a press release from the Chinese Embassy in Oman, Chinese government offered 100,000 vaccines for Oman and with the arrangements of the embassy and the health ministry of Oman, the "Spring Sprout" program has been implemented smoothly.