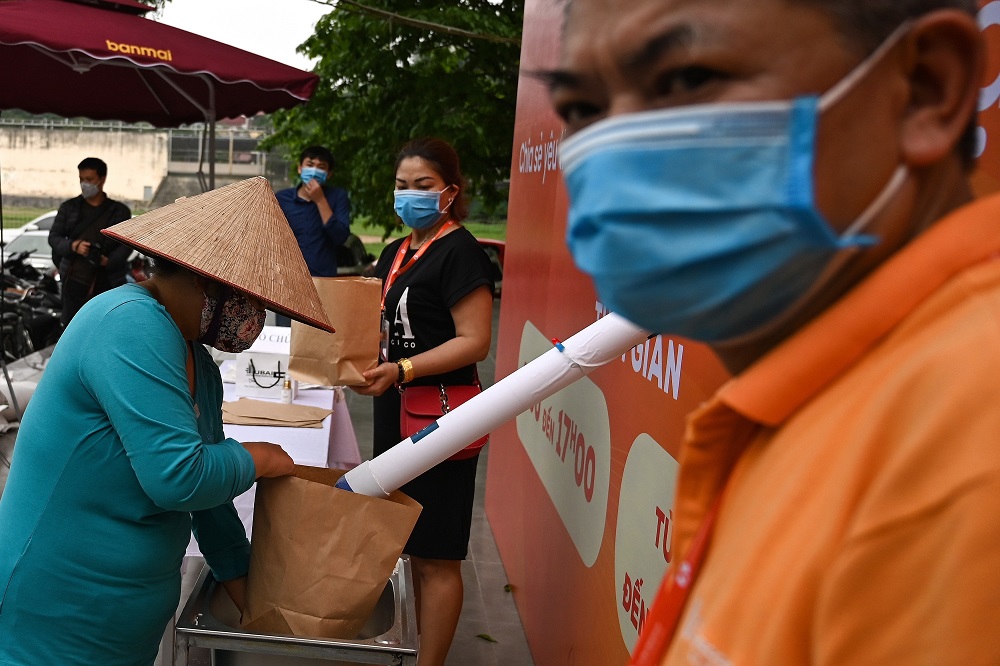 A resident wearing a face mask fills a paper bag with free rice in Hanoi on Saturday. Vietnamese have been restricting their movements as a preventive measure against the spread of the novel coronavirus. (Photo: AFP)

Vietnam and China can achieve victory together against COVID-19 as they understand and support each other, according to analysts.

"The battle against the pandemic will further enhance understanding and friendship between both nations," said Do Thanh Van from the Confucius Institute at Hanoi University.

From Jan 25 to April 12, Vietnam had 258 confirmed cases of COVID-19 with no deaths, according to the World Health Organization. More than 125 patients have recovered so far.

People in the two countries have been supporting each other, Do said.

When China was at the height of the pandemic, the institute donated masks to Guangxi Teachers' University and the Chinese embassy in Hanoi.

Later, Hanoi University started receiving donations from the Chinese side, including traditional Chinese medicine which has been used in Wuhan and proved effective in the treatment of local patients.

Meanwhile, Vietnam is gearing up to counter any new wave of novel coronavirus infections after initial progress in containing its spread.

"Vietnam took a good and comprehensive approach (when dealing with COVID-19), because they started early contact tracing, quarantine measures and a progressive policy of social distancing," said Thirumalaisamy P Velavan, founder and director of the Vietnamese-German Center for Medical Research in Hanoi.

Guy Thwaites, director of the Oxford University Clinical Research Unit in Vietnam, said the country was very rigorous with its case control management, particularly for flights and incoming passengers.

"Their measures to identify those who were infected or even just exposed at the airports and quarantine measures were very robust," he said.

Referring to the zero fatalities in Vietnam, Thwaites said one of the major reasons for this was that a large proportion of patients were young so they tended to be less vulnerable to COVID-19 than the elderly, or those with other disease such as diabetes and hypertension.

"Still, Vietnam had a number of people with critical illness, who required ventilation, even ECMO, but all of them survived," said Thwaites.

Vietnam declared COVID-19 a nationwide epidemic on April 1, according to Xinhua. But despite the slow spread of the disease, Vietnamese Prime Minister Nguyen Xuan Phuc on April 6 requested the preparation of plans to deal with a possible second wave of infections.

A new wave of infections may happen when things are back to normal and borders are open, because this could lead to an inflow of tourists, said Velavan.

As for the current outbreak, Velavan said: "There might be sporadic cases, but I don't expect that the numbers will shoot up much in the next couple of weeks."

Thwaites also agreed with this assessment, saying: "Vietnam has not got large numbers of patients at the moment, and that means buying time to put the new measures into place."