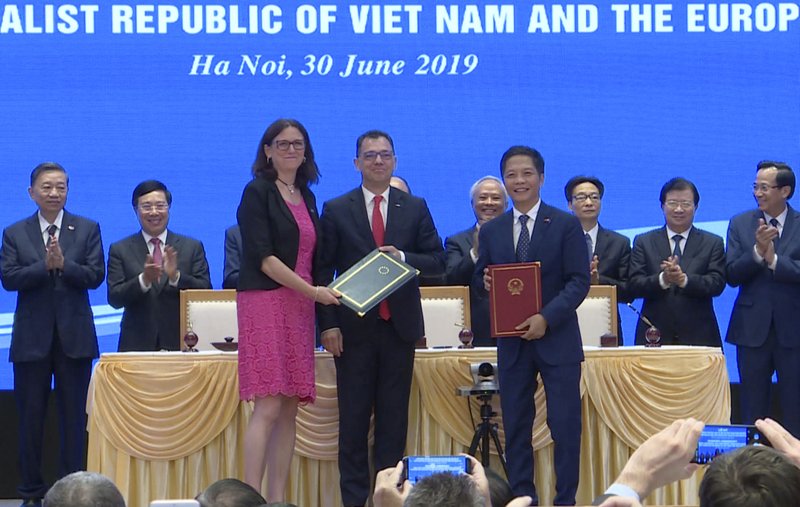 Vietnam and the European Union signed a free trade agreement on Sunday, opening opportunities to further boost trade between the euro bloc and one of Southeast Asia’s biggest manufacturing nations.

The agreement, which was signed by European Commissioner for Trade Cecilia Malmstrom and Vietnamese Trade Minister Tran Tuan Anh in Hanoi, Vietnam’s capital, will eliminate almost all tariffs for goods traded between Vietnam and the EU’s 28 member countries.

“It is a special day for relations between the EU and Vietnam. The agreement has opened a new horizon for the development of both sides,” Vietnamese Prime Minister Nguyen Xuan Phuc said after he witnessed the signing.

Once the deal takes effect, the EU will lift 85% of its tariffs on Vietnamese goods, gradually cutting the rest over the following seven years.

Meanwhile, Vietnam will lift 49% of its import duties on EU exports when the agreement is started. The rest will be phased out over 10 years.

Vietnam, with a population of 95 million, is one of the world’s fastest-growing economies, and the agreement is expected to accelerate greater trade volume and create vast opportunities for businesses and consumers on both sides.

“The agreement is very important for Vietnam,” said economist Pham Chi Lan, a former adviser to several Vietnamese prime ministers. “On one hand, it will urge the country to fasten its constitutional reform to match clauses in the agreement. On the other, it will boost the economy, especially in the private sector.”

Vietnam is the EU’s second-largest trading partner in Southeast Asia, with trade turnover of $56 billion last year, according to the national general statistics office.

The agreement, which had been negotiated since 2012, gives EU companies equal treatment with domestic bidders in competing for public contracts in Vietnam. It also commits Vietnam to standards for sustainable development, including improving its human rights record, protecting labor rights and upholding its pledges to deal with climate change issues under the Paris accord.

Vietnam and the EU also signed an agreement calling for investors to be protected with rules enforced by an investment court system.

“In the context of the ongoing trade war and protectionism, the agreement is a positive signal that global trade cooperation is still a trend and on its right track,” Lan said.

The deal is the EU’s second free trade agreement in the Southeast Asian region, after one with Singapore. It is viewed as a stepping stone for pursuing a comprehensive deal with the Association of Southeast Asian Nations, a 10-nation bloc with a combined population of 650 million.