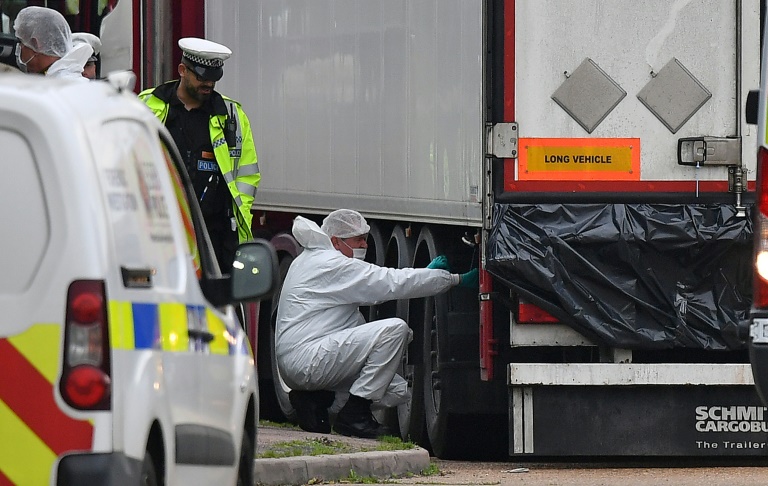 The 39 bodies were found in a refrigerated truck outside London last month. (Photo: AFP)

Vietnam said Thursday it was working to repatriate 39 bodies now identified as Vietnamese nationals found in a truck near London last month, in a case that exposed the deadly risks of illegal migration to Europe.

The country's embassy in London said a government delegation already in Britain was coordinating with officials to get the bodies home "at the earliest time".

It came as British police confirmed that those discovered in the refrigerated truck on October 23 all came from the southeast Asian nation.

In a letter obtained by AFP to the families of the 31 men and eight women who died, Vietnam's Prime Minister Nguyen Xuan Phuc said the tragedy had caused them and Vietnamese people worldwide "endless pain" and vowed to "soon bring the victims back to the homeland".

Essex Police, the local force investigating last month's gruesome discovery, said a coroner had now formally identified all the victims and their families in Vietnam had been informed.

"This is an important step in the investigation and enables us to work with our Vietnamese police colleagues to support the families of those victims," Assistant Chief Constable Tim Smith said.

"Our thoughts remain with the families and friends of those whose tragic journey ended on our shores."

One Vietnamese man, Nguyen Dinh Gia, told AFP on Thursday that officials had called him the day before to confirm that his son, Nguyen Dinh Luong, was among the victims.

"Our hope now is the body of my son will be brought home soon," he said.

The bodies were found in the early hours of October 23 inside the refrigerated section of the truck, which had just entered Britain on a ferry from Belgium and parked up near the port of Purfleet in Essex.

Police initially said the victims were believed to be Chinese nationals, until several Vietnamese families came forward to say they feared their relatives were on board.

Brokers help Vietnamese citizens travel to European countries -- often Russia -- with many hoping to then make it on to Britain illicitly on dangerous journeys.

The routes across Europe can be extremely risky, particularly the final leg to the UK where many migrants are hidden inside trucks, increasingly hard-sided refrigerated compartments which are not checked as rigorously as soft-sided good vehicles.

Charities and experts say that many migrants are subject to labour exploitation on their routes westwards and in Britain -- especially women and minors.

Many Vietnamese end up working in nail bars or on cannabis farms, earning money to pay back brokers and send home.

Several families of the suspected victims told AFP their relatives were seeking better lives abroad, and they were now worried about how to repay thousands of dollars of debt their children took on for the ill-fated trip.

In his letter, the Vietnamese prime minister called for more global cooperation "to eliminate this especially dangerous crime... and seriously punish the criminals".

Vietnamese authorities have detained 11 people there for facilitating travel abroad with the intention of staying overseas illegally, but none have been formally charged.

British police have charged the 25-year-old Northern Irish driver of the truck with manslaughter, money laundering and conspiracy to assist unlawful immigration.

They are also in the process of extraditing another suspect from Ireland and searching for others potentially involved.