Vigilance urged against virus mutation, sporadic outbreaks as world yet to end pandemic 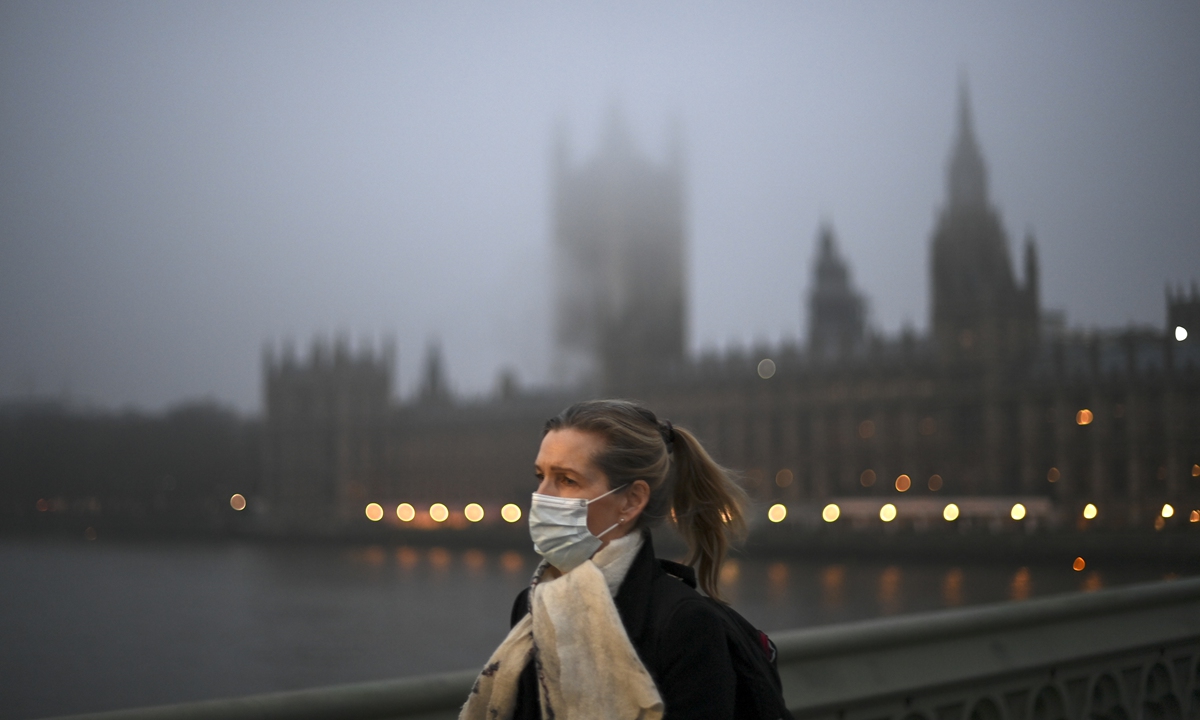 A commuter walks across Westminster Bridge in London, the UK. (Photo: AFP)

With more countries reporting coronavirus cases related to the new variant over the weekend and the world again escalating control measures, people are asking at the end of 2020: Will the world be mired again in a pandemic nightmare like the beginning of the year? Some senior Chinese public health experts say this prediction is unlikely because people are more prepared, while cautioning that vigilance amid a surge in sporadic outbreaks should not be relaxed.

Japan became the latest country to halt the entry of foreign nationals staring from Monday through the end of January as part of enhanced efforts to fend off the risks of the coronavirus variant, Japanese media reported. The variant, which is considered more transmissible, was first detected in the UK, but now it has been spreading in some 20 countries including Spain, Sweden, France and Canada, many of which announced a new round of lockdowns.

The coronavirus changed the world in 2020. COVID-19 has claimed 1.76 million lives and total infections topped 80 million. After a year of struggle, lockdown, travel bans and halted production and business, the new coronavirus variant first detected in the UK seems to have pressed a replay button of early 2020.

"It's not even the moment to ask whether we are close to an end to the pandemic, as people are still fighting the ongoing anti-virus war," Zeng Guang, chief epidemiologist of the Chinese Center for Disease Control and Prevention (CDC), told the Global Times on Sunday.

Given the rising sporadic domestically transmitted cases in China and spreading coronavirus variant related to the UK overseas, the situation has become much more severe in recent days, Zeng said, noting that "it also shows that the virus is running ahead of vaccines."

Amid the spread of the new variant, some European countries kicked off vaccination in the middle of another lockdown, believing mass vaccination can help flip the page on a difficult year.

"Today, we start turning the page on a difficult year. The COVID-19 vaccine has been delivered to all EU countries. Vaccination will begin tomorrow across the EU," Ursula von der Leyen, President of the EU Commission, said in a video tweeted during the weekend.

Similarly, Jin Dongyan, a professor at the School of Biomedical Sciences at the University of Hong Kong, said that when major economies in the world basically contain the epidemic and vaccinate a large proportion of their populations, the pandemic situation is expected to see an upturn in the second half of 2021.

The UK-found variant appears to be 56 percent more contagious than other variants and has acquired 17 mutation spots all at once, scientists found. But most said the chance of the mutation rendering current vaccines ineffective remains very low.

"There is no need to overly react to the mutated virus strain. A mutated virus is not the only reason to cause the surge in the number of confirmed cases. General social distancing measures and whether there are super spreaders may also count for the worsening situation in the UK or South Africa," Jin said.

Yang Zhanqiu, a virologist at Wuhan University, told the Global Times on Sunday that "the mutation of the virus is within expectations. Unlike at the beginning of this year, we have much more comprehensive testing means and prevention measures, and more importantly, countries are not fighting a war unprepared."

At the beginning of 2020, some countries thought the COVID-19 outbreak was none of their business and China was the one that needed to deal with the outbreak. But a year of jointly fighting the pandemic has changed this mindset, which would make the outcome of current sporadic outbreaks different, Yang said.