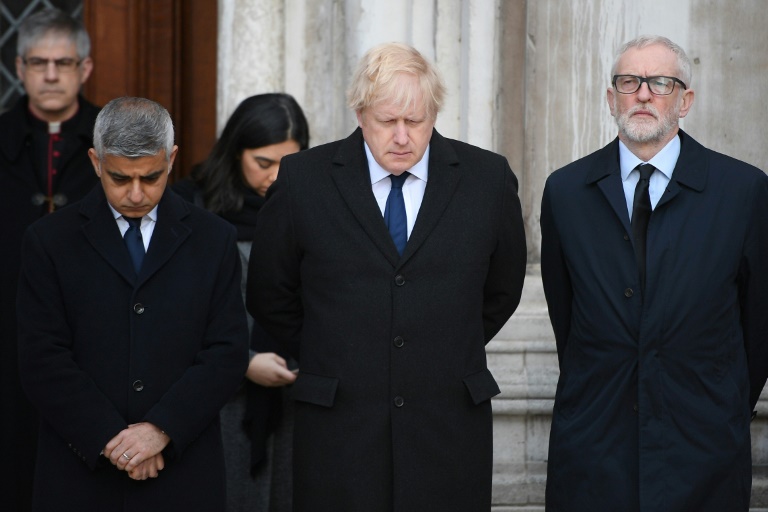 Tributes were paid on Monday to victims of the London Bridge terror attack, as the government said it was reviewing the early release from prison of dozens of convicted terrorists.

They were both killed on Friday when Usman Khan, who was wearing a fake suicide device, went on a knife rampage before being shot dead by armed police.

Khan, 28, had been released early from a 16-year prison sentence for an Al-Qaeda-inspired plot to attack central London after being deemed to no longer be a risk to the public.

The incident has provoked questions about legislation and triggered accusations that the government was seeking to make political capital from the tragedy before a general election.

The memorial event in the City of London financial district, a short distance from the scene of the attack, involved members of the emergency services and the public.

Mayor Khan told them: "The best way to defeat this hatred is not by turning on one another but by focusing on the values that bind us."

People should "take hope from the heroism of ordinary Londoners and our emergency services who ran towards danger, risking their lives to help people they didn't even know".

"It is also by drawing inspiration from Jack and Saskia, who from an early age chose to dedicate themselves to helping others," he added.

A minute's silence was also held in Cambridge, where the two victims were university graduates, and were working on a prisoner rehabilitation scheme that Usman Khan had attended.

Among those at the Cambridge vigil was Merritt's girlfriend Leanne O'Brien, who broke down in tears and clutched a cuddly toy.

Johnson has ordered the security services to step up monitoring of convicted terrorists released early, saying the cases of 74 individuals were being scrutinised.

As part of the review, the West Midlands Counter-Terrorism Unit in central England said officers had arrested a 34-year-old man "on suspicion of preparation of terrorist acts".

British media identified the man as Nazam Hussain, who was jailed with Khan in 2012 and also released early after successfully appealing against his original indeterminate sentence.

West Midlands Police said the man had been "recalled to prison due to a suspected breach of his licence conditions".

The Daily Telegraph newspaper said a number of convicted terrorists could be returned to prison within days.

The Metropolitan Police meanwhile said Yahya Rashid, 23, had been charged with breaching notification requirements under the Counter-Terrorism Act 2008.

Scotland Yard said the arrest "was not linked in any way to the London Bridge terror attack". Yahya was due to appear before magistrates.

Johnson has criticised the 2008 legislation and said he would introduce minimum 14-year sentences if he is returned to office after polls on December 12.

His governing Conservatives have traditionally portrayed themselves as the party of law and order.

But Merritt's family has warned against a knee-jerk reaction to his death.

"Jack would not want this terrible, isolated incident to be used as a pretext by the government for introducing even more draconian sentences on prisoners, or for detaining people in prison for longer than necessary," they said.

Justice Minister Robert Buckland told BBC radio he was meeting officials on Monday to review the licence conditions of every convicted terrorist released from prison.

Buckland said it would also look at those "about to be released and also a wider group who weren't convicted of terrorism offences but who present an extremist risk".

Buckland said any prisoner on early release had been stopped from going to events similar to the rehabilitation conference attended by Usman Khan near London Bridge on Friday.