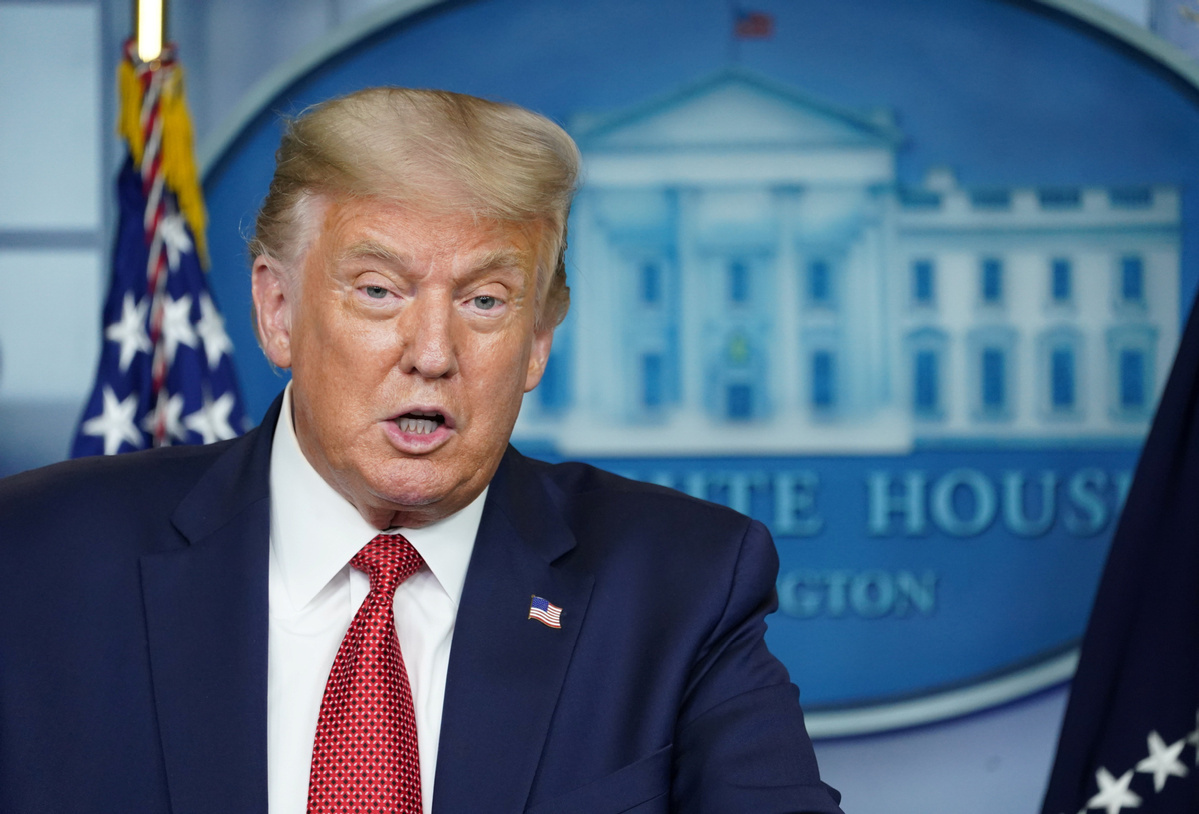 US President Donald Trump speaks during a coronavirus disease (COVID-19) pandemic briefing at the White House in Washington, US, August 10, 2020. (Photo: Agencies)

Regrettably, as his news conference on Tuesday indicates, the "violence, looting, and rioting" that have taken place in US cities such as New York, Portland, Chicago and Seattle have not prompted the US president to reflect on their root causes. Instead, he recited from his well-thumbed hymnbook a litany of familiar evils — the Democrats, China and anarchists — that his followers already believe are threats to all that they hold dear.

Never mind that these "un-American" forces are doing the devil's work when the administration is doing such a great job, bettering other countries in containing the contagion and reviving the economy, and leading the free world in a crusade against tyranny.

But while the president is patting himself on the back and preaching to the converted, the reality is at odds with that portrayed in his sermon. It is the woeful response of his administration to the novel coronavirus that has prompted him to constantly refer to it as the "Chinese virus", in the calculated awareness that doing so plays to a long-enduring trope in the US associating diseases with the Chinese.

And it is the hopelessness that the inept governance of his administration has instilled in people who have long suffered at the hands of those who own most of the wealth in the country that has transformed them into so-called anarchists, as any faith they may have had in upward mobility and the trickle-down effect has proved misplaced in the face of the administration's favoritism, indeed cronyism.

Despite the US being the most powerful country in the world, the living conditions and public services for its most vulnerable citizens, particularly against the backdrop of the pandemic and the economic woes it has caused, are lamentable even compared to those of some developing countries.

The social injustice revealed by the public health crisis has triggered a chain reaction of anger over already acute issues, which has only spurred the administration to intensify its blame game and proclaim itself the defender of American values, declaring that "If the left gains power, no city, town, or suburb in our country will be safe" — even going so far as to claim everyone will be "speaking Chinese".

While people are crying out for help, the president still talks of enemies within and without, while his top diplomat travels here and there and everywhere insisting there are enemies at every door.

But it is increasingly evident that the harder the incumbent administration tries to sell the notion that it is not responsible for what is happening, the fewer the folk who are willing to buy it.

If his administration resorts to ironfisted methods to muffle the people, turning a blind eye to its part in it, however "puzzling" it may be, these acts of so-called destruction will only escalate. Ironically, with many in the US finally linking their suffering with politics, the US leader has called on the people to stop "politicizing" the virus.

Many countries are looking for silver linings to the dark clouds. Yet the US administration is intent on darkening those clouds by making the virus a catalyst for greater power at home and abroad. But as is ever more obvious, its abilities do not match its ambitions. Instead, it is reaping what it has sown.