WORLD Violence-stricken US cities clean up, brace for more unrest

Violence-stricken US cities clean up, brace for more unrest 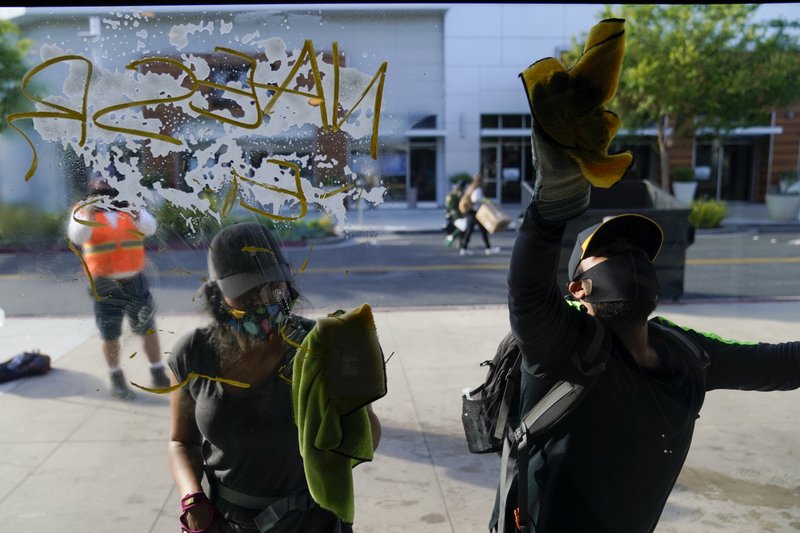 Volunteers clean up graffiti on a window at The Pike Outlets, June 1, 2020, in Long Beach, California after overnight protests in reaction to George Floyd's death while in police custody on May 25 in Minneapolis. (Photo: AP)

A country convulsed by violent protests picked up the pieces Monday morning and braced for more trouble amid a coast-to-coast outpouring of rage over police killings of black people. President Donald Trump demanded the nation’s governors crack down harder on the violence, telling them: “Most of you are weak.”

After six straight days of unrest, a new routine was developing: residents waking up to neighborhoods in shambles, shopkeepers sweeping up broken glass and taking stock of ransacked stores, and police and political leaders weighing how to address the boiling anger.

In New York, Mayor Bill de Blasio said he was considering imposing a curfew on the nation’s biggest city after a night in which groups of people broke into Chanel, Prada and Rolex boutiques and electronics stores.

At the same time, the mayor said the trouble in the city of 8.6 million people was being “fomented by a very small number of violent protesters. That is not what everyday community people are doing. I want to be very clear about that.”

While many of the demonstrations around the country have been peaceful protests by racially diverse crowds, others have descended into violence, despite curfews in many cities across the U.S. and the deployment of thousands of National Guard soldiers over the past week.

On Sunday, protesters hurled rocks and Molotov cocktails at police in Philadelphia, set a fire near the White House and were hit with tear gas or pepper spray in Austin, Texas, Atlanta and other cities. Seven Boston police officers were hospitalized.

In some cities, thieves smashed their way into stores and ran off with as much as they could carry.

Police officers and National Guard soldiers enforcing a curfew in Louisville, Kentucky, killed a man early Monday when they returned fire after someone in a large group shot at them first, police said. In Indianapolis, two people were reported dead in bursts of downtown violence over the weekend, adding to deaths recorded in Detroit and Minneapolis.

The demonstrations were sparked by the death of George Floyd, a handcuffed black man who pleaded for air as a white Minneapolis police officer pressed his knee against Floyd’s neck for several minutes.

Racial tensions were also running high after two white men were arrested in May in the February shooting death of black jogger Ahmaud Arbery in Georgia, and after Louisville, Kentucky, police shot Breonna Taylor to death in her home in March.

Even as police in some places tried to calm tensions by kneeling or marching in solidarity with protesters, officers elsewhere were accused of the very type of harsh treatment at the heart of the unrest.

In New York, the police commissioner said about six incidents were being investigated by the department’s internal affairs bureau, including a weekend confrontation in Brooklyn in which two police vehicles appeared to plow through a group of protesters.

In Fort Lauderdale, Florida, an officer was suspended for pushing a kneeling woman to the ground during a protest.

In Atlanta, two officers were fired after bashing in the window of a car and using a stun gun on its two occupants.

In Los Angeles over the weekend, a police SUV accelerated into several protesters in a street, knocking two people to the ground.

The upheaval has unfolded amid the gloom and economic ruin caused by the coronavirus, which has killed over 100,000 Americans and sent unemployment soaring to levels not seen since the Depression. The outbreak has hit minorities especially hard, not just in infections and deaths but in job losses and economic stress.

The scale of the coast-to-coast protests has rivaled the historic demonstrations of the civil rights and Vietnam War eras. At least 4,400 people have been arrested for such offenses as stealing, blocking highways and breaking curfew, according to a count compiled by The Associated Press.

“They keep killing our people. I’m so sick and tired of it,” said Mahira Louis, 15, who was at a Boston protest with her mother Sunday, leading chants of “George Floyd, say his name!”

At the White House, the scene of three days of demonstrations, police fired tear gas and stun grenades Sunday into a crowd of more than 1,000 chanting protesters across the street in Lafayette Park. A building in the park was burned down.

The district’s entire National Guard — roughly 1,700 soldiers — was called in to help control the protests, according to Pentagon officials.

Trump, in a video teleconference Monday with the nation’s governors and law enforcement authorities, said local leaders “have to get much tougher.”

“Most of you are weak,” he said. “You have to arrest people.”

Former Vice President Joe Biden, the Democratic presidential candidate, wrote a post online expressing empathy for those despairing about Floyd’s killing. On Monday, he met with community leaders at a predominantly African American church in his hometown of Wilmington, Delaware.

“The vice president came to hear from us. This is a homeboy,” said Sylvester Beaman, pastor of the Bethel AME church.

In Minneapolis, the officer who pinned Floyd to the pavement has been charged with murder, but protesters are demanding the three other officers at the scene be prosecuted. All four were fired.

Thousands marching on a closed Minneapolis freeway Sunday were shaken when a tractor-trailer rolled into their midst. No serious injuries were reported. The driver was arrested on suspicion of assault.