While New York City struggles with a second wave of the novel coronavirus, it is also dealing with a wave of violent crime.

A man was stabbed on 34th Street in Manhattan early Sunday — four blocks from where a 39-year-old man was fatally stabbed outside a pizzeria in one of two knifings hours earlier.

The latest victim, a 51-year-old man, was found bleeding profusely in the street near Eighth Avenue after a fight around 8:30 am, police sources told the New York Post.

The victim was taken to Bellevue Hospital in serious condition.

Another man was stabbed late Saturday on a train pulling in to Grand Central Terminal.

Sources identified Ronald Massaro, 39, as the victim killed in the pizzeria attack after he was stabbed in the chest after a fight with another man, the Post reported.

The killer fled up Eighth Avenue from the pizzeria at 38th Street, police said. A suspect identified as Lawrence Downey, 52 was arrested and charged with second-degree murder, sources told the Post. 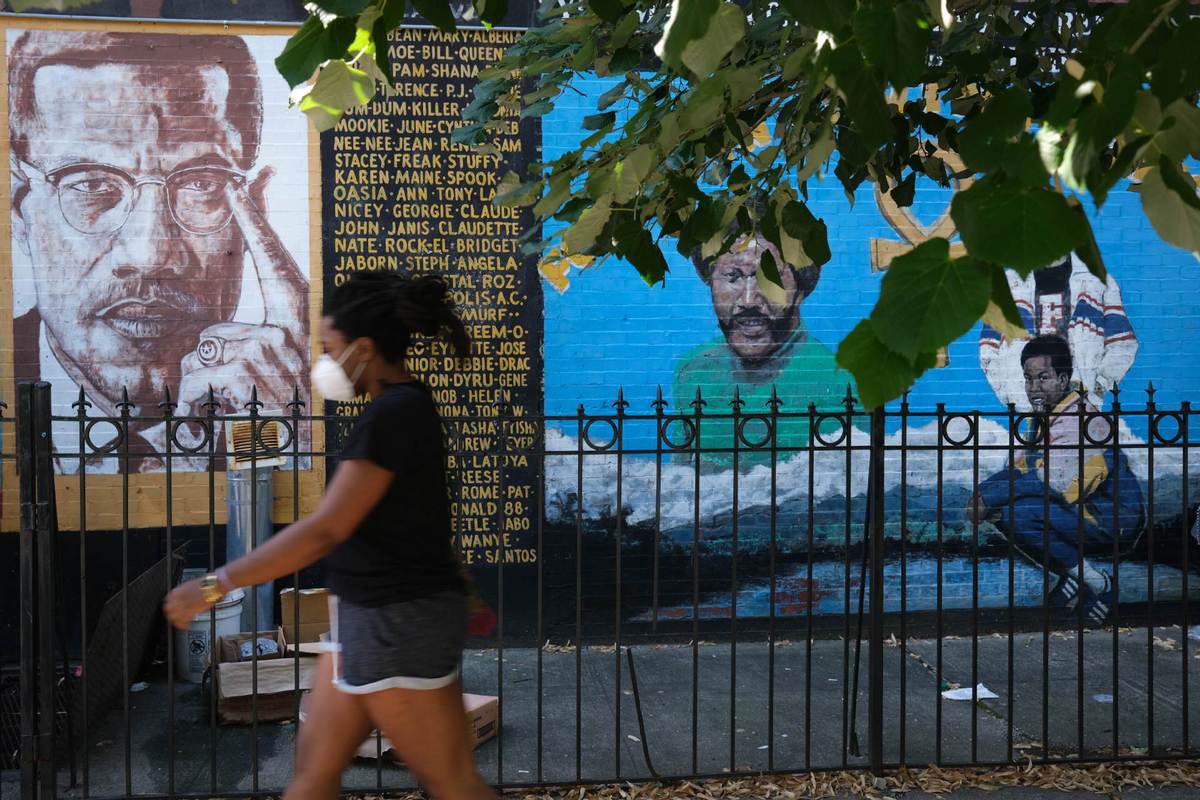 People walk by murals to those killed by violence near a crime scene in Brooklyn where a child was shot and killed on July 13, 2020 in New York City. (Photo: Agencies)

About an hour after that attack, a 53-year-old subway rider was slashed in the face after he had a fight with two men that started on a downtown 4 train and continued on the platform when the train pulled into Grand Central.

One man was arrested on suspicion of assault, while the slashing suspect was at large, sources said.

Violent crime in the city's subways is unfolding while the Metropolitan Transportation Authority tries to cope with an eight-month drastic drop in revenue due to reduced ridership from the pandemic and hundreds of thousands of office workers and tourists no longer in the city.

"Less riders can certainly give way to certain crimes," Edward Delatorre, a former transit police chief, told The New York Times. "A barren station or a shutdown could be inviting for certain crimes."

On Thursday, a 40-year-old woman was shoved onto the tracks in the Union Square subway station in Manhattan as a train pulled in. She fell between the rails, police said, miraculously sustaining only minor injuries.

The suspect, Aditya Vemulapati, 24, surrendered to a transit worker and was charged with attempted murder, assault and reckless endangerment.

On Wednesday night, a man was pushed onto the tracks at the 42nd Street-Bryant Park station by another man after the victim refused to give him money, authorities said. The victim was able to pull himself onto the platform. A suspect, Justin Pena, was arrested and charged with attempted murder.

"This city has a mental health crisis right now,'' she added. "We have got folks in this city who desperately need mental health care. I'm desperate for this mayor or the next mayor to take it on because we've got a long way to go."

Mayor Bill de Blasio, whose second term concludes on Dec 31, 2021, has blamed the latest increase in crime partly on business and school closures due to the pandemic.

New York Governor Andrew Cuomo told a news conference Sunday that he believes it will take longer to distribute a COVID-19 vaccine, two of which recently were shown to be 95 percent successful in clinical trials.

"People say, 'Don't worry, there's a vaccine.' I will wager you dollars for doughnuts, it's six months at a minimum before you hit critical mass with a vaccine," he said.

New York City had a 2.61 percent positive coronavirus test rate as of Sunday afternoon, according to the city Health Department. The city has suffered 19,537 deaths attributed to COVID-19.

"It's almost like a perfect storm," Alfred Titus Jr, an assistant professor at John Jay College of Criminal Justice and a former NYPD homicide detective, told Fox News. "We had bail reform, then defunding the police, which cut the amount of officers on the streets and the overtime that could be made, and now we have COVID-19."

"The City Council pretty much took away the ability of the NYPD to make arrests," SBA President Ed Mullins told Fox News. "We have cops out there right now that are hesitant to grab anybody simply out of fear that if it goes bad, we may get ourselves arrested."

Following protests over the death of George Floyd in Minneapolis police custody on May 25, the NYPD disbanded its plainclothes units. The NYPD also reassigned officers from homeless outreach to focus on gun crime.

Alex Weisman, a member of the first cast ofHarry Potter and the Cursed Childon Broadway, was randomly attacked at an Upper West Side subway station Tuesday afternoon. He suffered eye socket fractures and had to have surgery.

A 70-year-old woman was hit by a stray bullet Tuesday afternoon while riding a bus in Brooklyn.