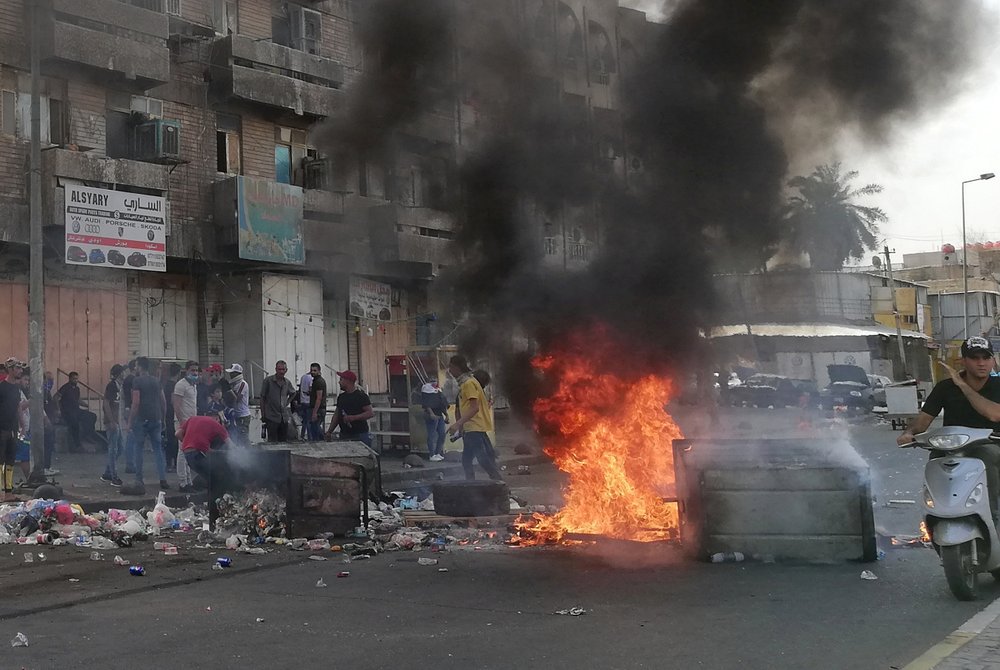 BAGHDAD, Oct. 4 (Xinhua) -- The anti-government protests in Iraq continued Friday as the death toll rose to more than 40 during the past four days.

Hundreds of demonstrators took to the streets in the Iraqi capital Baghdad and other Iraqi provinces. They voiced their anger that after two years of defeating the extremist Islamic State (IS) militants, millions of the population are still living in worsening situations in the oil-rich country.

The protesters are demanding for better living, job opportunities and basic services. They blame the deterioration on what they see widespread corruption and incompetence of the government.

In Baghdad, hundreds of demonstrators on Friday gathered on the streets and neighborhoods near the Tahrir Square in downtown Baghdad, and tried to cross the nearby al-Jumhuriya bridge to reach the once heavily-fortified Green Zone, which houses the main government offices and some foreign embassies, a witness told Xinhua.

The security forces clashed with the demonstrators and managed to disperse them with firing tear gas, water cannons and live ammunition, forcing the protesters to withdraw to surrounding streets, the source said.

Sporadic clashes occurred during the day in several other neighborhoods across the capital when the security forces confronted dozens of protesters who defied the curfew to rally with protesters from nearby neighborhoods.

As dozens of protesters failed to rally for a huge demonstration, many of them blocked the main streets at their neighborhoods with burned tires and chanted anti-government slogans, prompting the security forces to disperse them by firing tear gas and bullets.

Meanwhile, the media office of Joint Operations Command (JOC) said in a statement that two protesters and two security members were killed by snipers in the Tayran Square in downtown Baghdad and in eastern part of the city.

The JOC warned the Iraqi citizens that unidentified parties intend to agitate the civilians to create sedition between the security forces and the citizens, the statement said.

The demonstrations spread to other cities in the central and southern provinces, including the city of Diwaniyah, the capital of Qadsiyah province, where violent clashes occurred between demonstrators and security forces in the vicinity of the provincial government compound.

Arshad al-Salihi, member of the parliament human rights committee, told reporters that Diwaniyah witnessed clashes during the day that resulted in the killing of a civilian and wounding of 11 others, including three security members.

The violent protests also renewed in the provinces of Basra, Maysan and Wasit in southern Iraq and Diyala in eastern part of the country.

After four successive days of protests, the death toll rose to 41 killed, according to figures provided by Ali al-Bayati, a member of the Iraqi Independent High Commission for Human Rights.

The demonstrations erupted in Baghdad and several provinces across Iraq on Tuesday to protest against rising unemployment, government corruption, and lack of basic services.

The demonstration turned violent in Baghdad as protesters clashed with the police.

The protests also spread to other Iraqi provinces when hundreds of protesters attacked and burned several provincial government buildings and offices of leading political parties.

Early on Friday morning, Abdul Mahdi called on the protesters to calm down after days of violent protests.

In his televised speech, he said that "your demands for reforms and the fight against corruption have reached us," promising that his government would not make "empty promises."