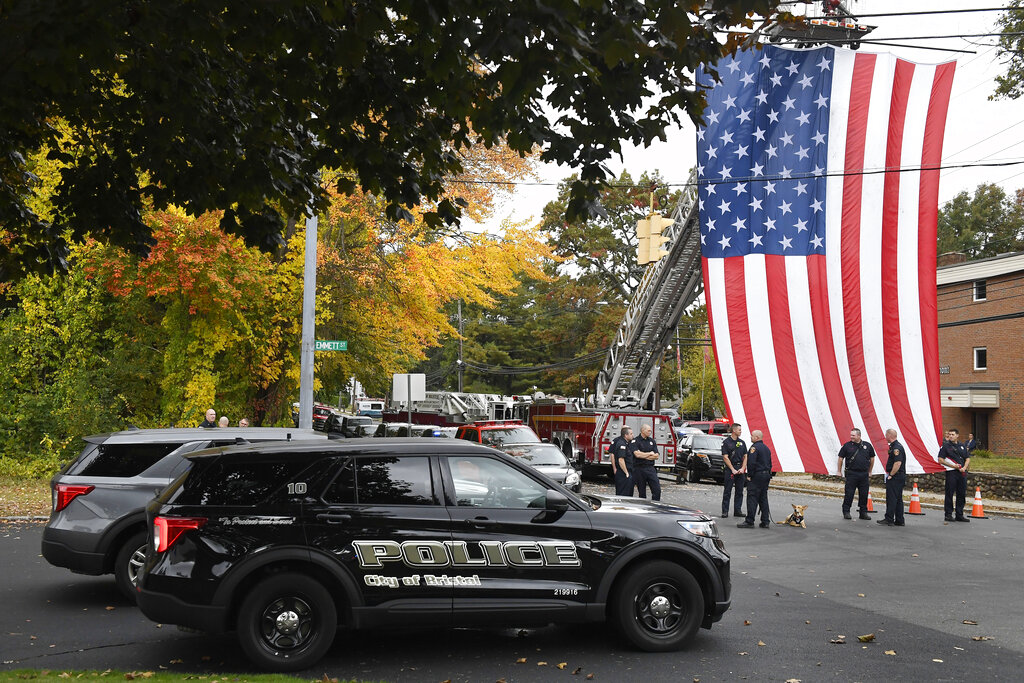 The shooting deaths of two Connecticut officers and wounding of a third punctuated an especially violent week for police across the U.S. and fit into a grim pattern: Even as more officers left their jobs in the past two years, the number targeted and killed rose.

According to organizations that track violence against police, 56 officers have been killed by gunfire this year — 14% more than this time last year and about 45% ahead of 2020's pace. The country is on track for the deadliest year since 67 officers were killed in 2016.

While the figures include a few officers killed by accidental gunfire, the number of ambushes in which police were injured or killed in surprise attacks with little chance to defend themselves has soared since 2020 and accounts for nearly half the officers killed this year.

Such an attack apparently struck Wednesday in Bristol, Connecticut, where the state police said Bristol Police Sgt. Dustin Demonte and Officer Alex Hamzy were killed and Officer Alec Iurato was wounded when they responded to a 911 call that appears to have been “a deliberate act to lure law enforcement to the scene.”

At least 11 police officers were shot around the country this week, including one fatally in Greenville, Mississippi, and another in Las Vegas.

“Those are really scary numbers for law enforcement, not just for individual officers, but for the organizations they work for, which have to be taking this into account as they’re hiring, retaining and training officers,” said Bill Alexander, executive director of the National Law Enforcement Officers Memorial, which tracks officer deaths in the line of duty.

“It’s not lost on the officers that the job they signed up for has become more dangerous,” he said. “That has to be taking a significant mental toll on the agencies at large and the individual officers doing the work.”

An off-duty officer was among five people killed in a shooting rampage by a 15-year-old boy in Raleigh, North Carolina, on Thursday evening, but it wasn't clear if the officer was targeted. In late June, a man in the Appalachian foothills of eastern Kentucky opened fire on officers serving a warrant in a domestic violence case, killing three and wounding five others — a scene that deputies called “pure hell.”

The Fraternal Order of Police reported that through Sept. 30 of this year, there had been 63 ambush-style attacks in which officers were wounded, with 93 officers shot, 24 fatally. That’s a lower number of such attacks than the first nine months of 2021, when there were 75 ambushes of officers, with 93 shot and 21 killed. The total number of ambushes in which police were hurt last year more than doubled from 2020.

The increase in ambushes and killings of police comes at a time when many departments around the country face staffing shortages, with some agencies down hundreds of officers and struggling to fill vacancies.

COVID-19 has been the biggest killer of police officers in the past few years, with 280 deaths in 2020, 467 in 2021 and 64 so far this year, the Officer Down Memorial Page reports. But many officers have retired early or resigned out of frustration with what they see as sagging public support amid “defund police” efforts prompted by the murder of George Floyd by a Minneapolis officer and the deaths of other Black people at the hands of law enforcement.

The number of officers nationally fell from roughly 719,000 in 2020 to 688,000 in 2021, according to data reported to the FBI. Hiring of officers has rebounded some this year, but resignations and retirements continue to prove a challenge for departments around the country, the Washington, D.C.-based Police Executive Research Forum found in a survey early this year.

Mike Zaro is the police chief in Lakewood, Washington, a city of about 60,000 people where four officers were assassinated at a coffee shop in 2009. He was the assistant chief at the time, and he said the department continues to see officers retiring early due to anxiety and stress that can be traced back to the attack.

“I started back in the early '90s, and back then and for a long time you just sucked it up and moved on whenever you dealt with any trauma related to the job, whether it was someone else’s or your own,” Zaro said. “After 2009, something of that magnitude, we recognized we had to try and do something different. We worked on the fly to develop methods of encouraging people to seek help. ... Eventually it became ingrained in what we do. Today it’s called officer wellness.”

Zaro recalls how crucial the support of the community was in helping the department get through the aftermath of the killings. Such support, he said, is instrumental in helping officers accept the risks they face.

Many law enforcement supporters worry about whether departments still have such backing, given the tenor of the national discourse around policing. They stress that questionable or illegal uses of force by officers are the rare exception, not the rule, but police have lost trust from many people outraged at repeatedly seeing cellphone or body-camera videos online of officers abusing their power.

“It would be infinitely harder to accept those risks and deal with the loss if the community is either suggesting the officers deserved it or making excuses for the person who committed the crime or just not supporting them,” Zaro said. “It’s more imperative now to make that part of the conversation, given the lashing out at police we’ve seen nationwide over the last couple of years.”