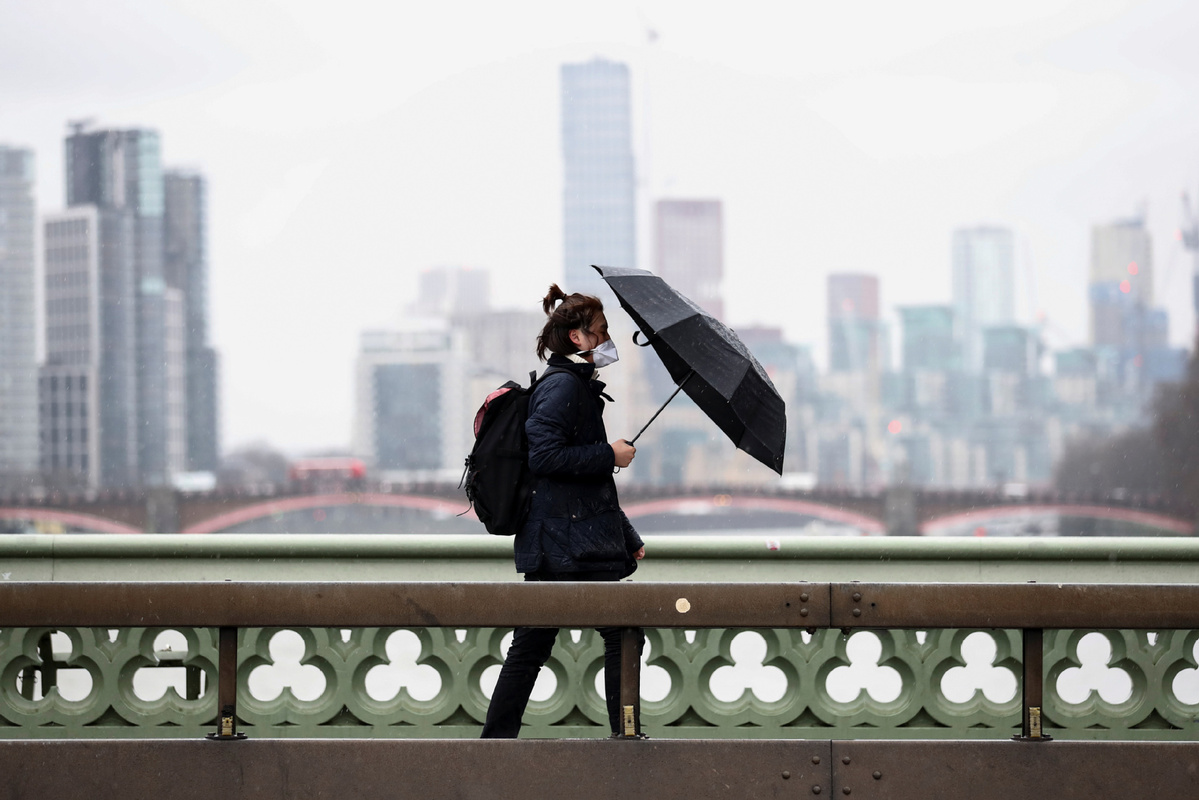 A man wearing a protective mask walks across Westminster Bridge with an umbrella in London, Britain March 5, 2020. (Photo: Agencies)

The novel coronavirus claimed its first victim in the United Kingdom late on Thursday afternoon, after the Royal Berkshire NHS Trust confirmed that a patient with pre-existing medical conditions who had tested positive had subsequently died.

The news came on the same day that the total number of cases across the UK reached 115, a rise of 30 on the previous day's total, and health officials announced that the country was moving into the second phase of its response to the outbreak.

Latest figures released by the government show that 25 of the cases are in London.

Earlier in the day, the government's chief medical adviser, Chris Whitty, said delay, the second phase of the government's four-step response program-contain, delay, research, mitigate-will see steps taken to slow down the spread of the virus.

He said it was "highly likely "that some of the newly diagnosed cases would have no connection with previously identified overseas-linked cases. He also told a Parliamentary committee that there was no need for the public to stockpile food or medicines, and that the outbreak was going to be "a marathon not a sprint".

A spokesman for Prime Minister Boris Johnson said it was "now highly likely that the virus is going to spread in a significant way" and officials were ramping up work to prepare for the next phase.

The first significant economic impact has also been felt, after the country's biggest regional airline, Flybe, went into administration and ceased all flights, putting 2,000 jobs under threat.

The Devon-based company flew 8.5 million passengers each year to 170 destinations across Europe. It had been in financial trouble for some time, but a slump in bookings because of concerns about the novel coronavirus proved to be the last straw.

In his daily briefing on Thursday, World Health Organization Director-General Tedros Adhanom Ghebreyesus told reporters "this is not a drill, this is not the time to give up", and said countries needed to put into action scenarios that they had been working on "for decades".

Across Europe, the virus continues to take its toll.

Switzerland reported its first fatality, a 74-year-old woman with underlying health problems, who died in hospital in Lausanne, and while restrictions could be introduced to stop the spread of the virus, the country's health minister said it was questionable what effect school closures like those seen in Italy would have, as children are among those at the least risk of getting the virus.

The men's and women's rugby union international matches between Italy and England on March 14 and 15 in Rome and Padua have also been postponed, having initially been scheduled to be played behind closed doors, and Prime Minister Giuseppe Conte said a constitutional referendum planned for March 29 has also been delayed.

A Downing Street spokesman has confirmed that the British government will not need to ask the European Union for an extension of the Brexit negotiations process beyond the end of the year because of the ongoing outbreak.

The EU's chief Brexit negotiator, Michel Barnier, replied that the UK had "underestimated" difficulties that may arise from this decision.