WORLD Virus clusters at French universities give Europe a lesson

Virus clusters at French universities give Europe a lesson

Can mandatory masks offer enough protection in lecture halls so packed that late arrivals have to sit on the floor? 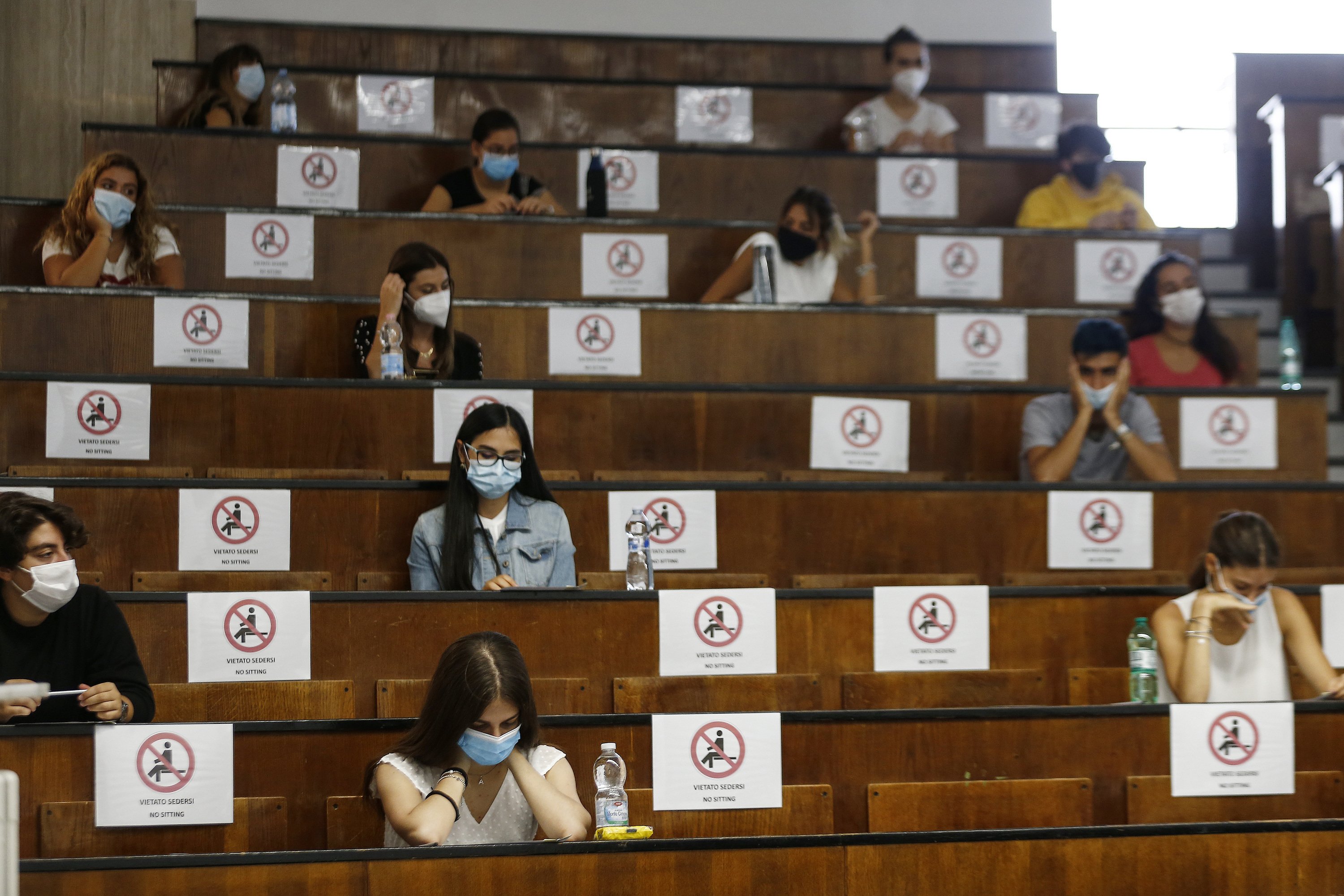 Students sit at a distance as a precaution against COVID-19, as they undergo an aptitude test to access the University of Medicine, in Rome Thursday, Sept. 3, 2020. (Photo: AP)

That's what worries many students at the centuries-old Sorbonne University in Paris as the coronavirus is on the rebound across France.

At least a dozen COVID-19 clusters have emerged since French campuses and classrooms opened this month. The clutches of cases are a warning sign for countries elsewhere in Europe, where most universities are readying to resume teaching and research in coming weeks.

"We go back to university in conditions that are a bit extreme, and we fear we might get COVID-19," Elise Gilbert, 20, who is studying literature at the Sorbonne, said of the overcrowding students encountered.

France's experience so far stands in contrast to what's happening in Britain, where virus-driven changes on campuses mean university life will look a lot different this term. Germany and Italy are also adapting their delivery of higher education in response to the pandemic.

The French government was determined to get people back to classrooms to bridge education inequities that the pandemic has exacerbated. The government also urged workers to return to offices and job sites to resuscitate the economy and to "learn to live with the virus."

At universities, the main change this year is mandatory mask-wearing at all times. But keeping physical distances appears impossible in many places.

Some students are raising their grievances on Twitter, using the hashtag #Balancetafac ("Squeal on your uni") to share pictures of packed classrooms and corridors.

They describe situations where there's no soap to wash their hands and where rooms, sometimes with no windows to provide fresh air, are not being disinfected between lectures.

"We are doing our best to respect social distancing, but sometimes we can't," Corentin Renoult, a 20-year-old Sorbonne journalism student, said.

Nevertheless, the Sorbonne is maintaining in-person classes for the time being.

"It's quite hard at the moment because we haven't got any extra means," Franziska Heimburger, assistant director of the university's English department, said. ".We don't have any more teachers, we don't have any more space, so we basically have to teach as best we can."

Heimburger said instructors won't penalize students for pandemic-related absences. "I've had students who live with their grandparents and they are worried of taking (the virus) back home with them," she said.

One factor in the overcrowding is more students are attending French universities. The number of students enrolled jumped by 270,000 to 2.8 million after the exam which allows high school students access to universities was canceled due to the pandemic. Students were instead granted access based on school grades, and many more qualified than usual.

The safety precautions differ broadly among schools. Some have strict public health measures in place, with small class size limits and a mix of in-person and online classes.

But others have had to temporarily shut down after dozens of students tested positive in multiple sites, from engineering to medical and business schools. They moved teaching online, as when the country was locked down at the height of its epidemic which has killed some 31,000 people in France.

In the UK, most universities do not begin their fall terms until late September or early October, and are readying big changes.

At the University of St. Andrews in Scotland, where the fall semester began Monday, many classes are being taught online — other than laboratory sessions or other practical instruction where hands-on learning is essential. Student societies are barred from meeting in person, and many students arriving from overseas will have to quarantine for two weeks in line with government protocols.

At University College London, only a quarter of the buildings will be occupied at one time. Teaching spaces will incorporate social distancing and everyone must wear face-masks. The university created an app for students to alert authorities if they have symptoms and plans to test up to 1,000 students and staff a day to keep the campus safe.

"I've got a public health expert team that are advising me when it's appropriate to extend testing beyond those that are immediately symptomatic,'' Michael Arthur, the president and provost at UCL. "So I think we're reasonably confident if we do have an outbreak — and I'm sure we will have, we're just playing with statistics — that we can move in and contain it very rapidly."

Student housing has been adapted to allow those who test positive to self-isolate.

In Germany, most universities won't start lectures before next month, and they have introduced numerous rules to ensure distancing, increased hygiene and bans on students' parties. They are also expanding online teaching.

Many Italian universities are reopening with distance learning this fall. Priority for physical classrooms was being given to first-year students, to aid their transition.

In the United States, dozens of universities have emerged as virus hot spots. Although students are being spaced apart in classrooms and dining halls, the virus has continued to spread in cramped dorm halls and through off-campus parties that have been blamed for thousands of cases.

The surge has prompted some universities to send students home and cancel in-person instruction for the rest of the term. U.S. officials are urging against that approach, saying it could spark outbreaks elsewhere. Instead, universities are being urged to keep students where they are and temporarily move classes online.