WORLD Virus could ‘smolder’ in Africa, cause many deaths, says WHO

Virus could ‘smolder’ in Africa, cause many deaths, says WHO 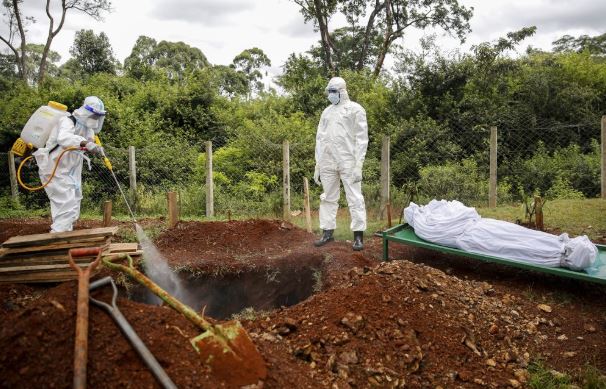 Members of a team dedicated to burying Muslim victims of the new coronavirus spray disinfectant into the grave before burying Mohamed Ali Hassan, whose cousin said had been unaware he had the new coronavirus and died in his house in the Eastleigh area, at the Langata Muslim cemetery in Nairobi, Kenya Thursday, May 7, 2020. (Photo: AP)

The coronavirus could “smolder” in Africa for years and take a high death toll across the continent, the World Health Organization has warned.

The virus is spreading in Africa, but so far the continent has not seen a dramatic explosion in the number of confirmed cases.

More than 52,000 confirmed infections and 2,074 virus-related deaths have been reported by African countries, according to figures released Friday by the Africa Centers for Disease Control and Prevention. The total number of cases has risen by more than 42% in the past week.

The disease appears to be spreading more slowly across Africa than in Europe, according to the WHO report. Officials say that could be due to poor surveillance or less developed transport links.

“While COVID-19 likely won’t spread as exponentially in Africa as it has elsewhere in the world, it likely will smolder in transmission hotspots,” said Dr. Matshidiso Moeti, WHO’s regional director for Africa who is based in Brazzaville, Republic of Congo. She said outbreaks would likely peak about one month after the virus starts spreading widely in communities.

“COVID-19 could become a fixture in our lives for the next several years unless a proactive approach is taken by many governments in the region. We need to test, trace, isolate and treat,” Moeti said in a video call.

The WHO estimated that if no containment measures are taken, COVID-19 could cause deaths ranging from 83,000 to 190,000 people in Africa in the first year of the pandemic. As many as 44 million of the continent’s 1.3 billion people could be infected during the same period, the UN health agency estimated, based on its prediction model of 47 African countries.

But the projected number of infections and deaths is based on the assumption that no containment measures are taken. In fact, 43 African countries have implemented measures to reduce the spread of the virus, ranging from nationwide lockdowns to restrictions in major cities to curfews, closed schools and banned public gatherings.

Africa, which has most of its population under 20 years old, may be experiencing a slower rate of transmission, less severe cases and less deaths because the virus is known to affect the elderly at a much deadlier rate.

But Africa could see a more prolonged outbreak that lasts a few years, according to the study. Algeria, South Africa and Cameroon as well as several smaller African countries are at high risk if containment measures are not prioritized, it said.

As many as 5.5 million Africans could require hospitalization for COVID-19, which would severely strain the health resources of many countries, said the study.

Africa has an average of nine intensive care unit beds per 1 million people, according to a recent WHO survey. These would be “woefully inadequate,” the new report said.

“The importance of promoting effective containment measures is crucial, as sustained and widespread transmission of the virus could severely overwhelm our health systems,” said Dr. Moeti. “Curbing a large-scale outbreak is far costlier than the ongoing preventive measures that governments are undertaking to contain the spread of the virus.”