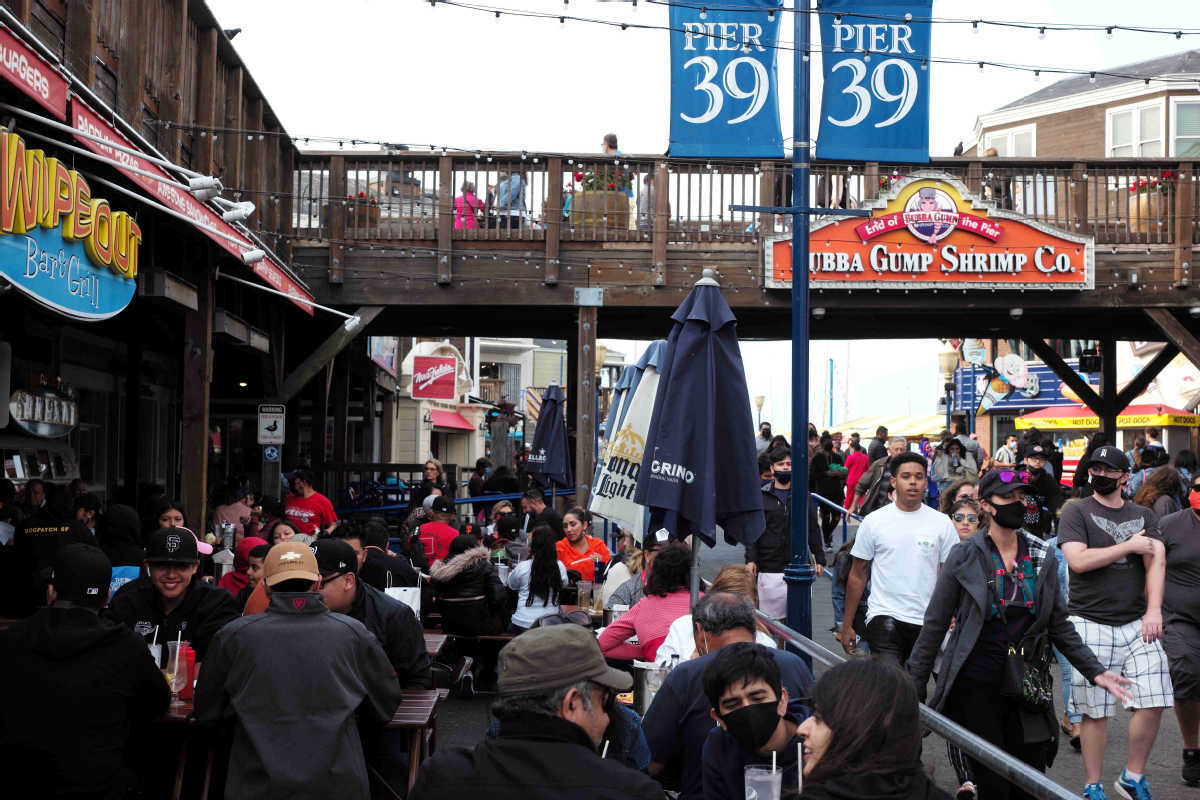 While much of the US economy has reopened, businesses such as these in San Francisco on Aug 15 require patrons and employees to show proof of COVID-19 vaccination. (Photo: Xinhua)

Editor's note: Chen Xu, China's permanent representative to the United Nations Office in Geneva, has called for a "transparent investigation" into two laboratories in the United States as part of a study into the origins of the virus that causes COVID-19. Chen made the call in a letter sent to World Health Organization Director-General Tedros Adhanom Ghebreyesus on Tuesday. The full text of two non-papers submitted with the letter follows:

Fort Detrick, where the United States Army Medical Research Institute of Infectious Disease, or USAMRIID, is located, is the center of US bio-military activities and notorious for its illegal, nontransparent and unsafe practices. Serious concerns have long been raised by the international community over US activities at Fort Detrick, in particular about USAMRIID, and there are many doubtful points about its connections with COVID-19.

1. Fort Detrick was the center of the US biological weapons program in history and USAMRIID was the main research entity there. Fort Detrick was known as the center of the US government's darkest experiments. It remains the development center for US germ warfare research, even after US renouncement of all offensive biological weapons programs in 1969 and ratification of the Biological Weapons Convention in 1975.

2. The BSL-4 lab in USAMRIID is the only BSL-4 lab of the US military.

USAMRIID stores almost all known deadly pathogens, such as Ebola, anthrax, smallpox, plague, and coronaviruses including SARS. Several staff in USAMRIID have conducted researches related to SARS, MERS and other coronaviruses. Back in 2003, after the SARS outbreak, USAMRIID worked with Ralph Baric's team from the University of North Carolina, or UNC, and developed a novel reverse genetic system for manipulation of a full-length cDNA of the SARS-CoV, and relevant outcomes were published in a paper in 2003. According to the paper, within two months after obtaining the RNA of the SARS virus, the full-length cDNA of the virus was successfully synthesized. This shows that as early as 2003, these institutes already had the advanced capabilities to synthesize and modify SARS-related coronaviruses. In 2007, USAMRIID published a paper in the Journal of Virology about using the Ebola virus to conduct animal testing on rhesus monkeys. The virus strains used in the experiments were obtained through reverse genetics techniques, to specifically remove the furin cleavage site, in order to compare the changes in virulence of the viruses. It is worth noting that the furin cleavage site is believed to be one of the reasons that makes SARSCoV-2 highly virulent. In 2018, USAMRIID carried out experiments on African green monkeys. The monkeys were experimentally infected with MERS-CoV to help study viral pathogenesis and develop vaccines. After COVID-19 broke out, USAMRIID and the Walter Reed Army Institute of Research, a research institute affiliated to the US Army Medical Research and Development Command, codeveloped the SARS-CoV-2 vaccine.

In 2001, five people were killed in an anthrax attack in the United States, and the suspect was a former employee of USAMRIID. In 2009, US officials found during inspections that multiple pathogens studied in the institute were not listed in the lab database, and suspended some of the lab's research.

In May 2014, Waverley View Investors LLC sued the US Army for loopholes in Fort Detrick's disposal of toxic waste, which caused the levels of trichloroethylene in the area to be 42 times as high as the federal standard. In February 2015, 106 families and individuals from Frederic County in Maryland filed a class-action lawsuit against Fort Detrick for harm and death caused by exposure to hazardous materials from Fort Detrick and asked for $750 million in compensation. However, the US government and army have consistently denied wrongdoing.

During US Centers for Disease Control and Prevention, or CDC, inspections at the USAMRIID a in June 2019, serious violations were found. The CDC then shut down the lab and halted all research in July 2019. The CDC reports laid out seven violations:

a. The USAMRIID systematically failed to ensure implementation of biosafety and containment procedures. Specifically, lab personnel were found to leave a door open while removing large amounts of biohazardous waste, greatly increasing the risk of pathogens escape and environment contamination.

b. An individual partially entered a room multiple times without the required respiratory protection while other people in that room were performing procedures with a non-human primate on a necropsy table, resulting in a respiratory occupational exposure to select agent aerosols.

c. The lab did not ensure that employee training was properly verified when it came to toxins and select agents, making it unable to assess whether lab personnel understood and commanded necessary skills.

d. Lab personnel did not wear gloves when disposing of biohazardous waste.

e. The lab failed to safeguard against unauthorized access to lab waste. Contaminated personal protective equipment was stored in a specific area, but such area did not limit access to those with access approval.

f. Lab personnel did not maintain an accurate or current inventory for a toxin.

g. A lab building and its interior facilities did not have a sealed surface to facilitate cleaning and decontamination. Cracks were found around a conduit box, in the ceiling, and in the seam above a biological safety cabinet.

The lab restarted operation in November 2019, but it is not made public what has been done to redress these violations.

4. After the lab was shut down, outbreaks of respiratory diseases occurred in nearby communities.

In July 2019, 54 people in Greenspring, Virginia, displayed respiratory symptoms including cough and pneumonia. The community is only one hour's drive from Fort Detrick. According to a health official from the state of Virginia, the number of reported respiratory cases in the area went up nearly 50 percent in the summer of 2019.

In July 2019, a mysterious pneumonia outbreak associated with e-cigarette use was reported in Wisconsin. Symptoms included shortness of breath, fever, cough, vomiting, diarrhea, headache, dizziness, and chest pain. Starting from then, an unprecedented outbreak of lung disease spread across the nation. As of Dec 17, 2019, more than 2,500 hospitalized cases were reported across 50 states. Experts believe this type of disease might represent one or more new clinical syndromes, and more research is needed to determine the cause.

The 2019 influenza in the United States might have overlapped with COVID-19. According to US CDC statistics, there were about 39 to 56 million influenza cases between October 2019 and April 2020, resulting in 24,000 to 62,000 deaths. Given the similar symptoms, COVID-19 patients could have been misdiagnosed as influenza patients. To determine whether such cases exist, in particular in and prior to October 2019, a nationwide retrospective investigation and research should be done in the United States.