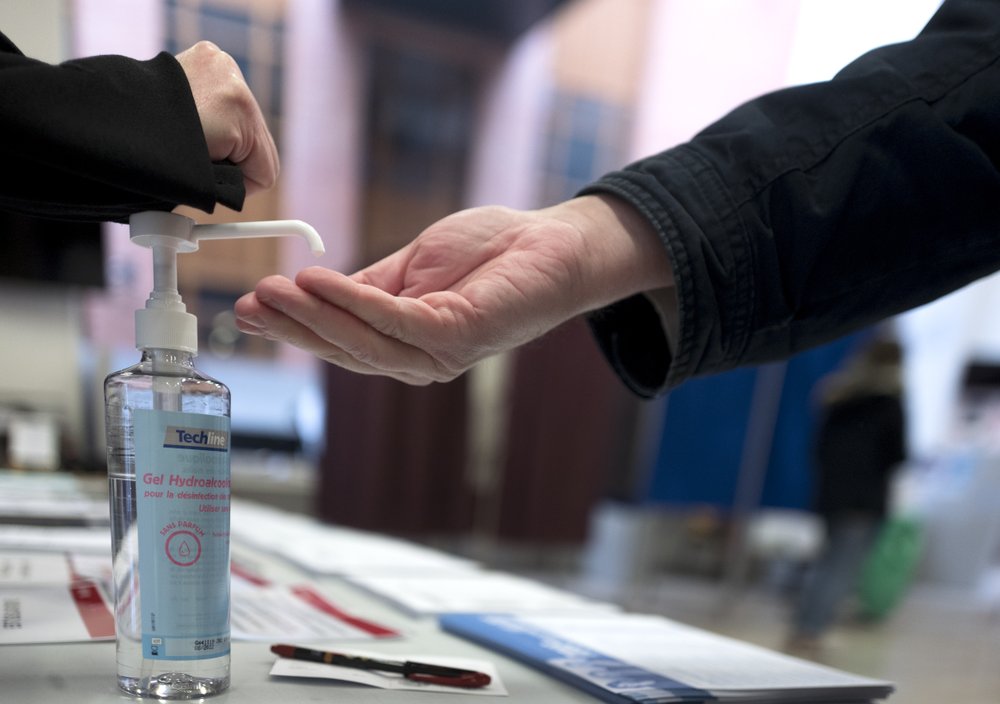 A man washes his hands during the first round of the municipal elections, in Lille, northern France, Sunday March 15, 2020. (Photo: AP)

French voters queued up Sunday in polling stations across the nation to choose all their mayors and other local leaders. But others decided not to go amid concerns over how public gatherings spread the new coronavirus.

Voting stations opened just as a drastic new order came into effect shutting down all of France’s restaurants, museums and most stores to stem the spreading coronavirus that has hit the world economy hard.

France has around 4,500 cases of the virus, including 91 people who have died. Worldwide, over 156,000 people have been infected, 5,800 have died and nearly 74,000 have recovered. The disease for most people causes only mild or moderate symptoms but for some, including the elderly and the sick, it can cause more severe illness.

French President Emmanuel Macron decided against delaying the election amid concerns that would be undemocratic. But the virus hurting Sunday’s turnout, which was 38% by 5 p.m., compared to 54% at the same time in 2014.

“I believe it is important that that democratic moment take place,” Macron said after voting in his hometown of Le Touquet in northern France. He said people should go vote “with precautions” but that it was “idiotic” to keep going to restaurants and cafes.

Macron said he keeps hydro-alcoholic gel in his pocket and that he hasn’t been tested for the virus because he has no symptoms.

Those who showed up to the poll stations described a feeling of duty, despite the challenges.

“It’s not ideal, but it’s important we go vote. Life in this city and in society shouldn’t stop,” said Laure Marie Diers, a manager in Paris.

Organizers were told to impose a one-meter (about three-foot) gap between people in lines, and to provide soap or hydro-alcoholic gel and disinfectant wipes for voting machines. Voters were told to bring their own pens to sign the register.

Some had marked off the floor with tape to indicate one-meter spacing; others had no indication and voters bunched up irregularly. Some voters washed their hands before and after casting a ballot, others didn’t bother. Staffers reassured voters that they were disinfecting voting booths every hour.

Sunday’s elections are the first round of a two-round vote for leadership of all 35,000 French communes, some of only a few dozen inhabitants. Voters will choose among lists of candidates running for mayor and town council seats.

If no list gets the absolute majority in the first round, all lists that receive more than 10% of votes will qualify for the second round, currently scheduled for March 22.

While most voters cast ballots based on local issues, the elections are an important gauge of public sentiment before the 2022 presidential election.

Sunday’s voting is a tough challenge for Macron’s 3-year-old centrist party, which is competing for the first time in municipal elections and still lacks local roots across France. His government is also unpopular after months of protests from the yellow vest movement economic movement against perceived social injustice, and several weeks of strikes against the government’s planned pension overhaul.

The conservative Republicans party, the Greens party, the far-right National Rally and the struggling Socialists are also vying for key mayoral seats and to strengthen their nationwide political bases.

The main battleground is Paris, whose whose mayor is an influential figure in French politics and will oversee the 2024 Summer Olympics.

“If the government says we can vote, I’d hope we can trust them,” said Frederic Bouchardie, a 46-year-old company owner in Paris. “Voting is an important civic duty, we need to elect our mayor.”