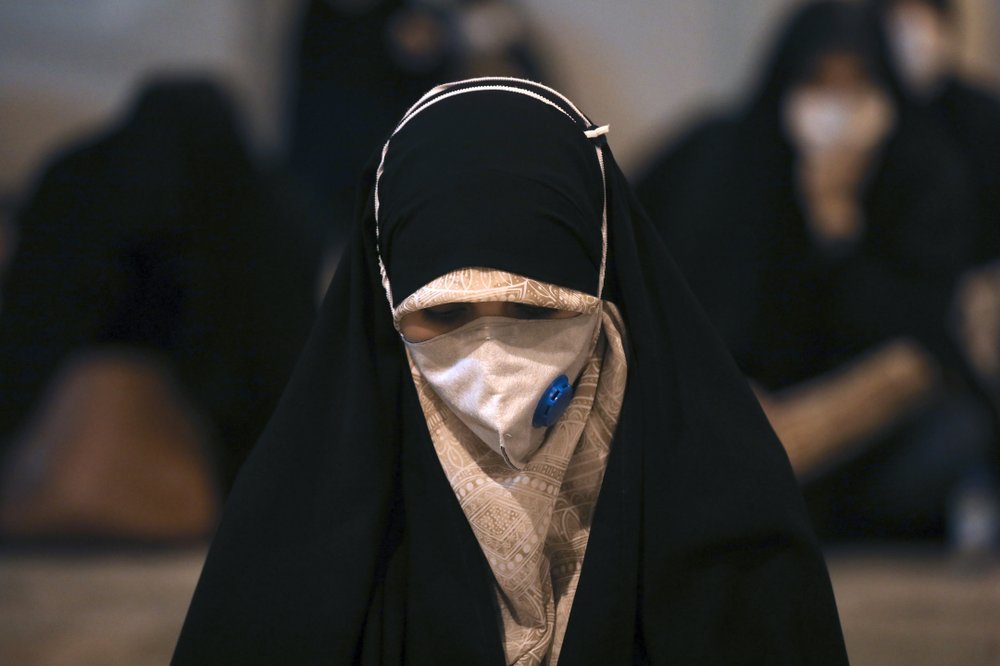 A worshipper wearing a protective face mask to help prevent the spread of the coronavirus prays at the mosque of the Tehran University on Laylat al-Qadr, or the night of destiny, during holy fasting month of Ramadan, in Tehran, Iran, May 12, 2020.  (Photo: AP)

Muslims worldwide will celebrate one of their biggest holidays under the long shadow of the coronavirus, with millions confined to their homes and others gripped by economic concerns during what is usually a festive time of shopping and celebration.

The three-day Eid al-Fitr marks the end of the fasting month of Ramadan for the world’s 1.8 billion Muslims. People usually celebrate by traveling, visiting family and gathering for lavish meals — all of which will be largely prohibited as authorities try to prevent new virus outbreaks.

The holiday will begin on Saturday or Sunday, depending on the sighting of the new moon, and the dawn-to-dusk fasting of Ramadan will come to an end.

Some countries, including Turkey, Iraq and Jordan, will impose round-the-clock curfews for the duration of the holiday. In Saudi Arabia — home to the holy cities of Mecca and Medina — people will only be allowed to leave their homes to buy food and medicine.

But even in countries that have largely reopened, the holiday won’t be the same.

Most restrictions have been lifted in Jerusalem, but the Al-Aqsa mosque compound — the third holiest site in Islam — will remain closed until after the holiday. Shopkeepers in the Old City, which has been emptied of tourists and pilgrims since March, are reeling from the effects of six weeks of lockdown.

The Jafar family’s famous sweets shop in the Old City is normally a hive of activity, with tourists and locals enjoying knafeh, a syrupy cheese-filled pastry. These days the seating area is empty and dark as only takeout is allowed.

“It had a huge impact on us,” said Ali Jafar, one of the owners, as he worked the counter. He said business has dropped by more than two thirds, forcing them to lay off 10 workers.

In Egypt, authorities have extended the nighttime curfew, which will now begin at 5 p.m. instead of 9 p.m., and halted public transportation until May 29. Shopping centers, malls, beaches and parks — which would ordinarily be packed — will be closed.

Manal Zakaria, who lives in the city of Alexandria on the Mediterranean coast, said her family usually celebrates by gathering for big meals, singing, dancing and taking group photos.

“I am very, very, very sad because I will not be seeing my siblings and their children,” she said. “No matter how much we talk over the phone, there is nothing like coming together.”

The virus causes mild to moderate symptoms in most people, who recover within a few weeks. But it is highly contagious and can cause severe illness or death, particularly in older patients or those with underlying health problems.

In Indonesia, the largest Muslim-majority country, President Joko Widodo said restrictions would remain in place through the holiday. The country, with a population of 270 million, has reported more than 18,000 cases, including around 1,200 deaths.

“I emphasize, there is no relaxing the policy of large-scale social restriction yet,” Widodo said during a virtual Cabinet meeting on Monday.

Since the start of the Ramadan, the government has imposed an outright ban on “mudik,” a holiday tradition in which millions of Indonesians living in big cities flock to their hometowns to celebrate with relatives. Health experts had warned it could set off a wave of new cases.

“This ongoing pandemic has changed our tradition, separated us in celebrating Eid,” said Noor Hidayat Asri, a civil servant in Indonesia’s capital, Jakarta. “We are like dealing with a merciless and invisible enemy this time around.”

Malaysia will allow people to visit relatives who live nearby, but such gatherings are limited to 20 people. Visitors are urged to wear face masks and to refrain from hugging, kissing and sharing plates. Some mosques have reopened, but congregations are limited to 30 people.

India’s 172 million Muslims are also preparing for a subdued holiday, with large gatherings banned. They have faced heightened stigma, threats and boycotts by many Hindus, who blame the local outbreak on a three-day convention of Islamic missionaries held in March.

In some states, Indian Muslims have launched campaigns urging people to refrain from buying new clothes for the holiday and instead give to the needy.

In Iran, which has endured the deadliest outbreak in the Middle East, authorities have imposed few restrictions ahead of the holiday aside from cancelling mass prayers in Tehran traditionally led by Supreme Leader Ayatollah Ali Khamenei.

Iran has faced criticism for not imposing the kind of lockdown seen elsewhere in the region, but authorities have said they had to weigh the effects on an economy eviscerated by U.S. sanctions. Iran has reported nearly 130,000 cases and more than 7,000 deaths, but the rate of new infections has declined in recent weeks.

In Iraq, the government has allowed most businesses to reopen in the last few weeks but plans to reinstate a 24-hour curfew over the holiday. The streets were busy in the days leading up to Eid as people shopped for clothes, toys and home appliances.

“Many people buy presents for Eid. It’s good business for us,” Ahmed Hashem said as he arranged bicycles outside his shop. “The past few months have been difficult.”

In war-ravaged Somalia, authorities have urged the cancellation of large gatherings and celebrations, but it’s unclear whether that will be enforced. Shoppers have packed into markets and shopping centers in the capital, Mogadishu, in recent days.

In the United Arab Emirates, home to the futuristic commercial hub of Dubai, parks and private beaches will be open but groups will be limited to five people. Children under 12 and adults over 60 are barred from malls in Dubai and Abu Dhabi, and other restrictions limit the number of people allowed inside. Restaurants can only operate at 30% of capacity.

Despite the more relaxed approach aimed at buoying the economy, the government announced a nationwide curfew during Eid al-Fitr lasting from 8 p.m. to 6 a.m.