Students across England, Wales and Northern Ireland have had the usual tension and drama of end-of-school exam results day added to by the chaos caused to the examination system by the novel coronavirus. 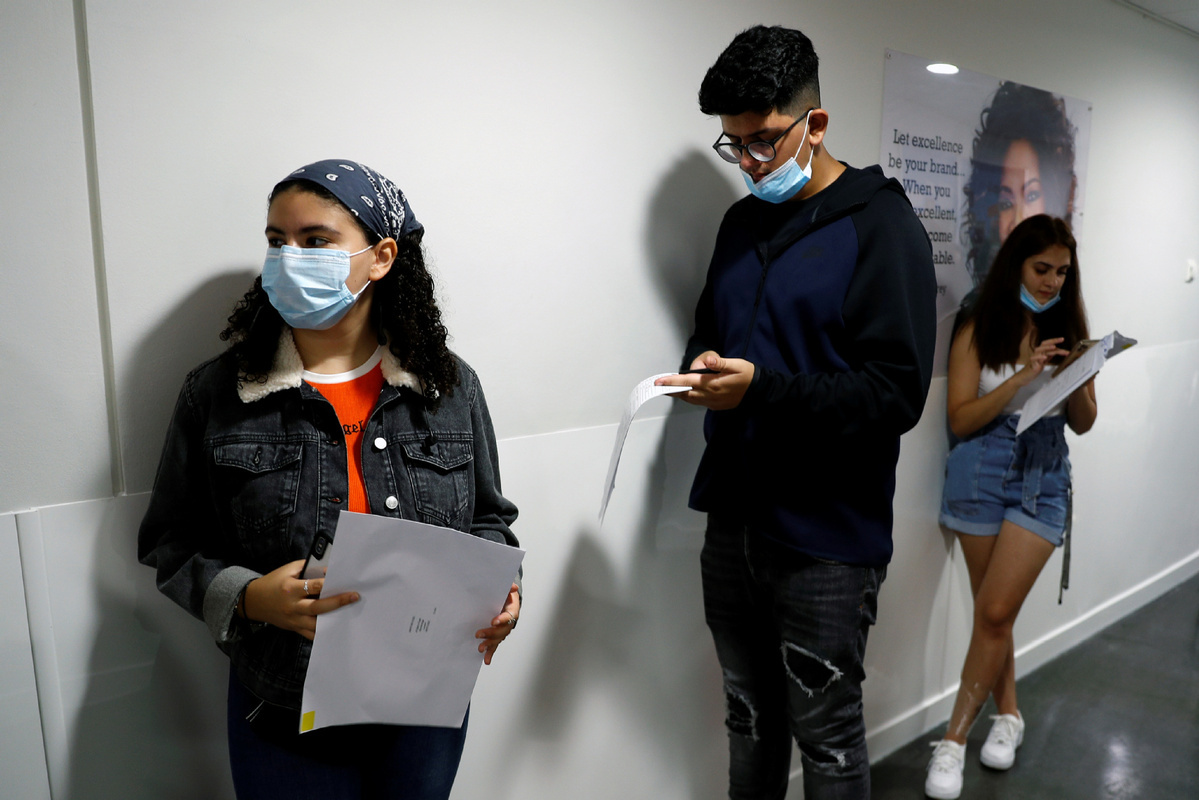 Students wait for a consultation with teachers after they received their A-Level results at Ark Academy, amid the spread of the coronavirus disease (COVID-19), in London, Britain August 13, 2020. [Photo/Agencies]

Thursday saw the announcement of the results of A levels, the exams that have a huge say in shaping what universities and post-school options students have, but with lockdown having seen exams cancelled, results have been calculated, largely based on teachers' predictions rather than proven outcomes, resulting in confusion and upset for many school leavers.

Although overall there has been an increase in top grades, the bigger picture is one of widespread volatility. In England, 36 percent of entries resulted in a lower grade than predicted, with 3 percent being two grades lower than expected.

"We have received heartbreaking feedback from school leaders about grades being pulled down in a way that they feel to be utterly unfair and unfathomable," said Geoff Barton, the general secretary of the Association of School and College Leaders. "They are extremely concerned about the detrimental impact on their students."

Scotland has a different education system, and there, moderated results were overturned after widespread protests. The UK government has ruled out any such u-turn, but said students unhappy with their grades will have three avenues of appeal, with one of them being to sit the exam in September, although with regular schooling having been so heavily disrupted since March, it is unclear how many would choose that option.

The children's commissioner for England, Anne Longfield, said the appeals process could mean "inequalities already existing in the education system will be deepened", with better-off schools more likely to have the resources to support students, and in the initial results, the biggest improvement in top grades went to students from fee-paying schools.

Furthermore, exams standards board Ofqual has confirmed that if a student appeals against their grade, the ranking system within schools could see other students' positions affected, which in turn could open up another appeal.

Elsewhere, the National Health Service Confederation has warned of a looming mental health crisis in England as a consequence of the novel coronavirus.

The overwhelming nature of the pandemic caused a sharp decline in referrals being made, similar to the decline in cancer referrals identified recently by the Institute of Cancer Research.

This is expected to cause a backlog, with some mental health providers predicting a 20 percent increase in demand for services, but also a reduction in their ability to treat patients because of social distancing and infection control. Furthermore, the anxiety caused by the pandemic's ongoing nature is expected to exacerbate the problem.

Slightly more positive economic news has come from the property sector, where after a period of inactivity caused by lockdown, house prices are continuing to rise.

"Supported by the government's initiative of a significant cut in stamp duty, and evidence from households and agents suggesting that confidence is currently growing, the immediate future for the housing market looks brighter than many might have expected three months ago," said Russell Galley, managing director of one of the United Kingdom's biggest mortgage lenders, Halifax.

Europe's largest holiday company, Tui, has also offered hope for the longer term. Although it has announced a loss of more than 1 billion euros ($1.18 billion) for the period between April and June, when revenue fell by 98 percent, it has seen a 145 percent increase in bookings for summer 2021.

Athletes looking to run in the Paris Marathon should also be making plans for next year after this year's staging of the race, which had already been postponed from April to November, was cancelled altogether.

"After having tried everything to maintain the event, we, alongside the City of Paris, feel obliged to cancel the 2020 edition of the Schneider Electric Marathon de Paris and the Paris Breakfast Run," said a statement from race organizers.

The news comes days after it was confirmed that the 2020 London Marathon, also postponed from earlier in the year, will be an elite-only event. The race usually attracts tens of thousands of entrants, raising vast amounts for charity, but this year their only opportunity will be to take part remotely.