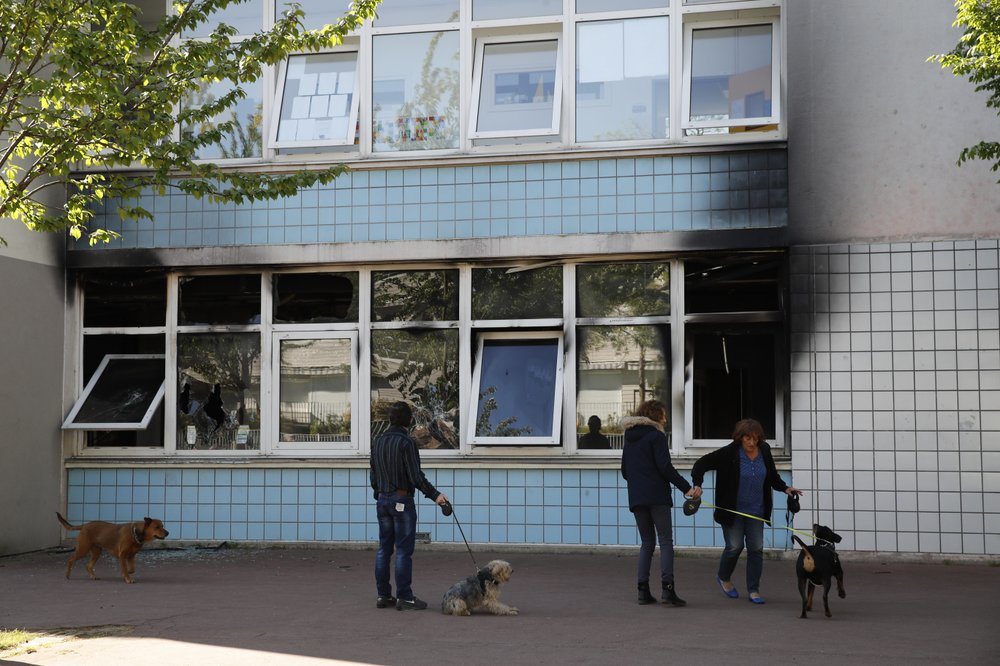 FILE - In this April 22 2020, file photo, people walk their dogs past a burnt school in Gennevilliers, outside Paris. (Photo: AP)

Joining more than 1,000 others, Djemba Diatite stood for hours in line to feed her growing family, grateful for handouts of fruits, vegetables, and soap. It was her first time accepting charity, but she had no choice. The coronavirus pandemic has turned her world upside down.

With open-air markets closed around Paris, supermarket prices skyrocketing, an out-of-work husband, two children to feed and another on the way, Diatite said even tomatoes were now too expensive.

“This is my only solution,” she said, relieved that a local group in her Paris suburb of Clichy-sous-Bois stepped in with help.

Clichy-sous-Bois — where fiery nationwide riots started in 2005 — is just 23 kilometers (14 miles) northeast of the French capital, but with its rows of housing projects, restless youth and residents teetering on the poverty line, it feels light-years away.

Providing food aid might be the most fixable of the longstanding problems in the heavily immigrant housing projects ringing France’s large cities. Leader after leader has tried and failed to find remedies for often-dilapidated and cramped housing, chronic delinquency, thriving drug trade and, above all, the entrenched discrimination against minorities that limits their job prospects in France.

“We see numerous people in need, urgently, in a way we’ve never seen,” he told France Info radio. “In these tense neighborhoods, the smallest spark can trigger still more tension.”

Alongside the food crisis, there has been scattered violence, with youths targeting French police in confrontations that end in clouds of tear gas, including in Clichy-sous-Bois. The town is where filmmaker Ladj Ly shot his Oscar-nominated modern police drama “Les Misérables.”

A call for calm came from an unlikely person, a 30-year-old man with a long criminal record who crashed his motorcycle into the open door of a police car in Villeneuve-la-Garenne, northwest of Paris. As claims that police were at fault spread across the internet, the man from his hospital bed implored gangs to “go home,” in a video released by his lawyer.

Clichy-sous-Bois was the spark for nationwide rioting 15 years ago. Nightly TV images of the destruction awakened many in France to large swaths of a population they barely knew existed.

The lockdown is again shining a spotlight on those who struggle even in the best of times.

The town is in the poorest region of mainland France, Seine-Saint-Denis, where the overall mortality rate has more than doubled since March 1, when the country began counting virus deaths, according to national statistics agency Insee.

Experts have blamed the density of the population, the difficulty of social distancing in large families and the fact that those in poorer areas often have jobs with a higher risk of infection.

“This crisis is simply making (the problems) much more visible,” said Mohamed Mechmache, who heads the group ACLeFeu, or Enough Fire, which grew out of the riots and is distributing food in Clichy-sous-Bois.

Thousands now line up twice a week for the distribution, organized after the coronavirus lockdown began.

Diatite is typical of many. Her husband drives a bus at Paris’ Orly Airport, which closed last month due to the lull in air traffic, putting him out of work. Their growing family lives in a 26-square-meter (less than 280-square foot) apartment.

“There is a very large accumulation of inequalities that often increase” in a crisis, said sociologist Marie-Helene Bacque. “We’re moving toward a large social crisis.”

About 70% of Clichy-sous-Bois is of immigrant origin, she noted, typical of similar suburban towns.

Interior Minister Christophe Castaner said since the start of the lockdown, police have carried out checks on 220,000 people in Seine-Saint-Denis to ensure confinement rules are respected, more than double the national average.

Some police attribute scattered violence to the squeeze on drug dealers during the lockdown.

Bachir Ghouinem, who helps ACLeFeu distribute food, dismissed the violence as just “another problem” among the many facing France’s poor suburbs. But he predicted a worst-case scenario should the food distributions stop.

“Rioting and pillaging. We’re afraid of that,” he said. “If it happens here, it happens everywhere.”

Mechmache, the leader of the ACLeFeu, took a longer view.

“I dare to hope that there will be an awareness at the end of this lockdown to tackle the problems of inequality, which have existed for more than 30 years,” he told The Associated Press.

For Bacque, the sociologist, “it’s the moment to return to the fundamental challenge, more equality.”

But she says she doubts that kind of political investment will happen, adding that “an explosion is not to be excluded.”

A tram that allows Clichy-sous-Bois residents to connect more easily with Paris — and jobs — opened in December. In the nearby housing project known as Les Bosquets, dilapidated high rises used by drug dealers were razed several years ago, fulfilling a government promise after the 2005 riots.

“But you don’t transform the social dimension by fixing ... architectural problems,” Bacque said.