Virus more dangerous if SARS-CoV-2 merges with other coronavirus: expert

A recombinant strain of the novel coronavirus has likely been detected in the US, leading Chinese experts to warn on Thursday that a more dangerous virus could emerge if SARS-CoV-2 recombines with other coronavirus.

Bette Korber, a scientist at the Los Alamos National Laboratory, earlier this month said she discovered evidence of the new strain, which was a recombination of the variants detected in the UK and California and which may be responsible for a recent wave of cases in Los Angeles, according to a report published in the London-based New Scientist magazine on Tuesday. 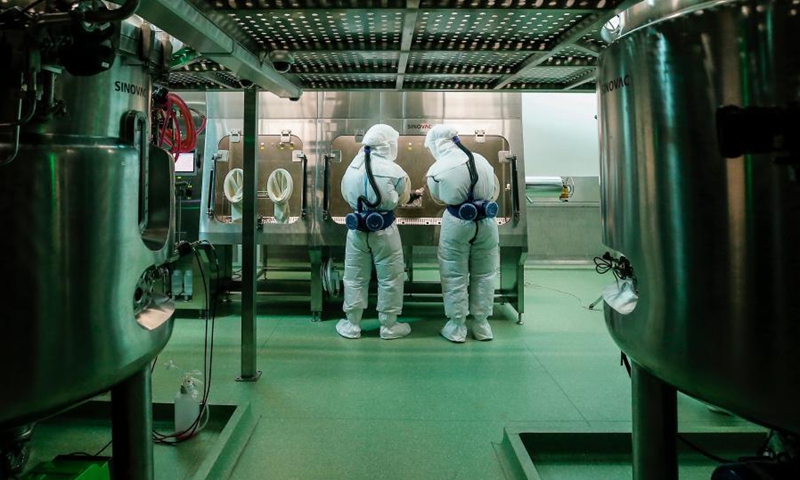 Recombination can be viewed as a greater variation than mutations discovered previously. But as long as it is still limited within the SARS-CoV-2 strains, it would not largely affect the virus' antigenicity, a Beijing-based vaccine expert told the Global Times on Thursday on condition of anonymity.

However, the expert warned that the situation would be worse if a recombination occurs between SARS-CoV-2 and other coronavirus - for example, the SARS virus.

Recombination could lead to the emergence of new and even more dangerous variants, although it isn't clear how much of a threat this first recombination might pose, said the New Scientist magazine report.

If confirmed, the recombination would be the first to be detected in this pandemic while continuous and rapid mutations of SARS-CoV-2 have brought about enough concerns to the world over the deadly disease, as some vaccines have been reported to be less potent against certain variants.

"It is certainly impossible for humans to prevent the virus from mutating. Facing the changes, we have to develop multivalent vaccines or seasonal vaccines and accept inoculations to get immunity, just like what we do against the flu," Jiang Chunlai, a professor at Jilin University's School of Life Sciences, told the Global Times on Thursday.

Dimas Covas, director of the Butantan Institute, the Brazilian partner of Chinese vaccine producer Sinovac Biotech, told media on Wednesday that they had received good results on the efficacy of the Sinovac vaccine against the variants detected in the UK and South Africa, while BioNTech/Pfizer and Oxford/AstraZeneca vaccines have reported unsatisfactory performance on some strains.

Covas of the Butantan Institute did not give a specific data of the efficacy, but said that the institute is also testing the vaccine against the variant which was detected in Brazil, and believes that positive results will come out soon, Reuters reported.

On the same day, a report released on Wednesday in The New England Journal of Medicine said that researchers have found that the BioNTech/Pfizer vaccine is less potent against the coronavirus variant detected in South Africa and produces only one-third of the antibodies it did for the original virus.

Earlier this month, South African health officials had announced a halt in the country's rollout of Oxford/AstraZeneca's coronavirus vaccine after a study showed it offered reduced protection against the COVID-19 variant first identified there.