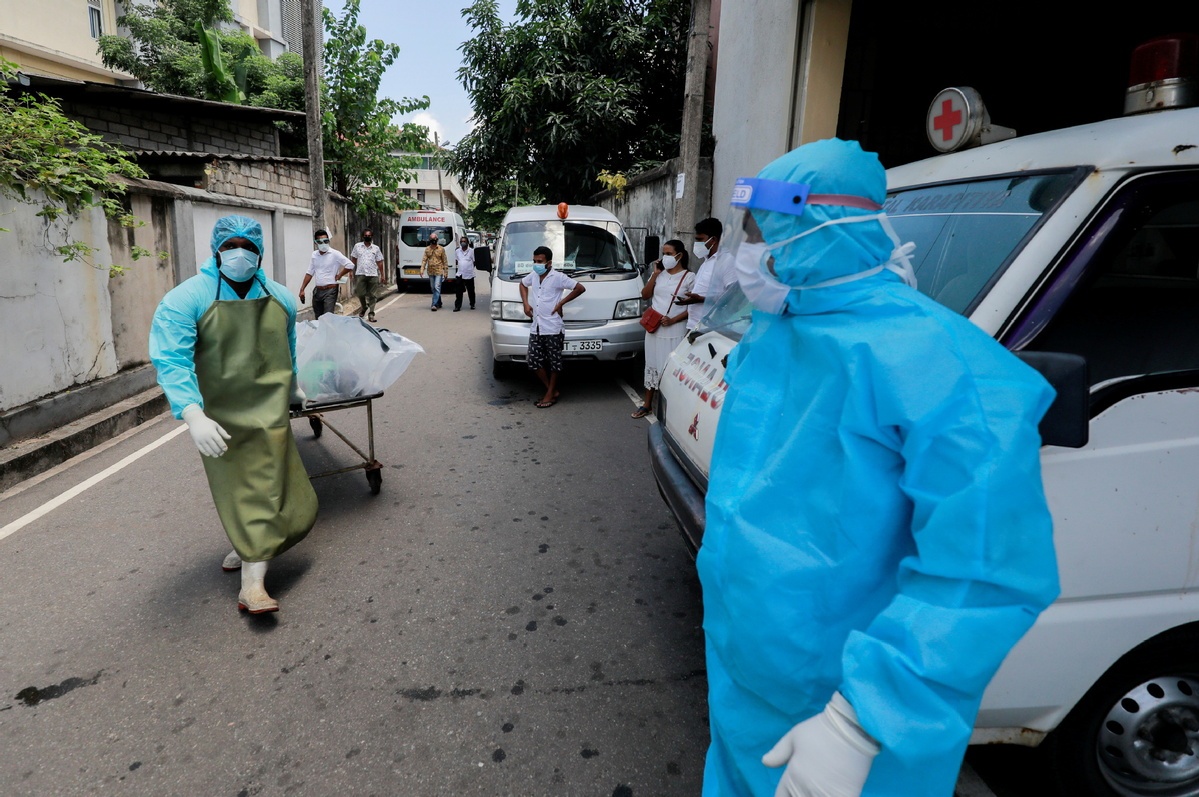 A medical official carries a body of a coronavirus disease (COVID-19) victim from a freezer storage inside a container to a trolley at the Judicial Medical Officer's premises in Colombo, Sri Lanka Aug 20, 2021. (Photo: Agencies)

More Asian countries are voicing their opposition to efforts by some outside the region to politicize studies into the origins of the virus that causes COVID-19. And influential figures in those countries have joined in the condemnation, while also calling for stepped-up efforts against the pandemic.

There should be no politicizing of the issue, Sri Lanka's Foreign Ministry said in a statement last week. The ministry said scientific and evidence-based methods must be used in the efforts to trace the origins of the virus.

"Multilateralism and international cooperation provide the best possible means to effectively and sustainably defeat the pandemic," it said. "It is equally important to conduct a comprehensive, inclusive, and impartial study on the origin of the virus."

According to the statement, the next phase in the study should reflect the key findings of a report by the World Health Organization-China joint study team.

Similar statements have been released by Pakistan, Bangladesh, Cambodia and Laos, among other nations.

Salman Bashir, a former foreign secretary of Pakistan and former ambassador to China, said that the Sri Lankan statement is fair. Investigating the origins of the virus is about science, not politics, he said: "Proclivity to the contrary or politicizing it obfuscates science with lethal effects for mankind as a whole," he said.

Karori Singh, an emeritus fellow at the University of Rajasthan in India, also said such statements against politicizing the matter play "a constructive role".

"Global solidarity and prudence in a multilateral framework is the most appropriate option instead of accusing or blaming one another," Singh said.

Singh said that political leaders in certain countries are still accusing China for concealing information about the virus without any scientifically valid evidence. In this way, they have created "an acrimonious situation".

Earlier, Suos Yara, vice-chairman of the Commission for External Relations of the Cambodian People's Party, said that a certain country has made a big fuss about the issue of origin tracing, concocted reports without any credibility, and attempted to shift the blame for its own anti-epidemic failure to China. These efforts serve that nation's domestic and geopolitical purposes.

On Sept 2, while commenting on a recent origin-tracing report by the United States intelligence community, Asim Iftikhar Ahmad, spokesman for Pakistan's Foreign Ministry, said Pakistan rejects insinuations that have been made in relation to the origin of the virus. Connections made with race, a region or ethnicities are inappropriate, the spokesman said.

The China-WHO joint study report on COVID-19 origins-tracing published in March has drawn an authoritative and scientific conclusion on issues in this respect. The conclusion should be recognized, respected, maintained and taken as the basis for origins tracing in the next phase, the spokesman said.

Last month, Bangladeshi Foreign Minister AK Abdul Momen said that studies in the field should be objective rather than politically motivated.

A political party leader in Bangladesh questioned the United States report on the origin issue that was released on Aug 30. Dilip Barua, the general secretary of the Communist Party of Bangladesh (Marxist-Leninist), called it "fabricated, false" and motivated by political factors. Barua said the US appears to be trying to make the pandemic a political matter.

In August, Laotian Prime Minister Phankham Viphavanh told the media that politicization efforts are inhumane, and scientists from all countries must work together to find out why the disease occurred.

In Nepal, Narayan Man Bijukchhe, chairman of the Nepal Workers and Peasants Party, said that viruses know no borders or races, and can only be defeated when the international community ramps up concerted efforts.

Singh said: "The globally responsible leaders, therefore, must refrain from adding fuel to the fire through their fragile statements out of domestic political compulsions and necessity in the already fractured world and focus more on the recovery of the damage done by pandemic."

Xinhua contributed to this report.