Dr. Ahmed el-Rabii spent years treating Palestinians wounded by Israeli fire during wars and clashes in the Gaza Strip. Now that the coronavirus has reached the blockaded territory, the 37-year-old physician finds himself in the unfamiliar role of patient. 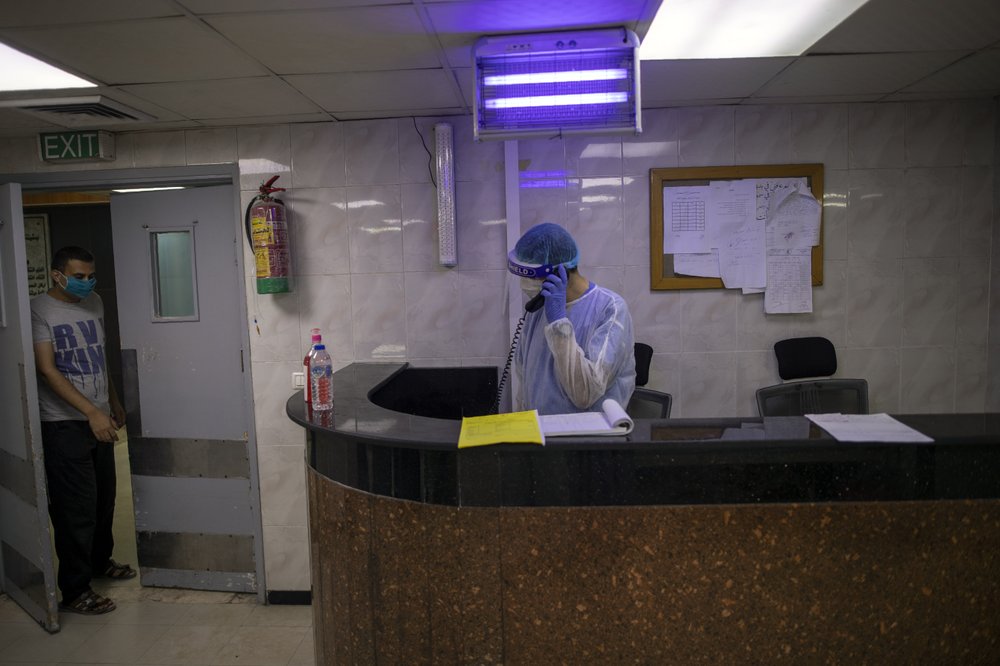 Palestinian doctors wear protective clothes as they work at the emergency room of the al-Quds Hospital in Gaza City, Sept. 7, 2020. /AP

El-Rabii is the first Gaza doctor diagnosed with COVID-19 and is among dozens of health care workers infected during the local outbreak, which was detected late last month. The spread among frontline workers has further strained an already overburdened health care system.

Speaking from one of the two hospitals designated to treat coronavirus cases, el-Rabii said the threat in many ways is more terrifying than war.

During fighting, "you only fear being hit by shrapnel by mistake," he said. "But with the virus, you constantly worry because you do not know how or from where it will hit you: from a patient, from your colleague, or by touching the elevator or any other surface.” 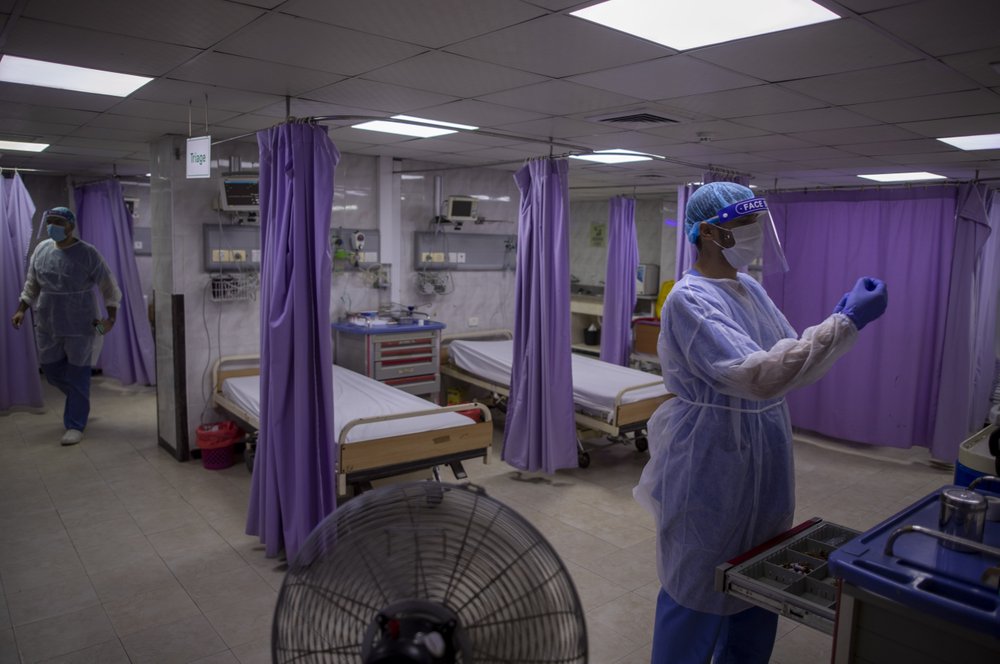 Palestinian doctors wear protective clothes as they work at the emergency room of the al-Quds Hospital in Gaza City, Sept. 7, 2020. /AP

Since 2007, Gaza has been under an Israeli-Egyptian blockade meant to isolate Hamas, the Islamic militant group that seized control of the territory that year.

Widely impoverished and densely populated, Gaza has been on lockdown since authorities confirmed four infections from a single family on Aug. 24. It was the first time the virus was detected outside quarantine zones set up for people returning from abroad.

Despite limited testing capacity, over 1,000 active cases have already been detected. Nine people have died.

The outbreak has been especially hard for Gaza's medical workers. For more than a decade, they have been on the front lines treating injuries during conflicts with Israel. They have worked in an ailing health system gutted by the blockade and intra-Palestinian political feuding that left doctors, nurses and other medical workers with only partial salaries. 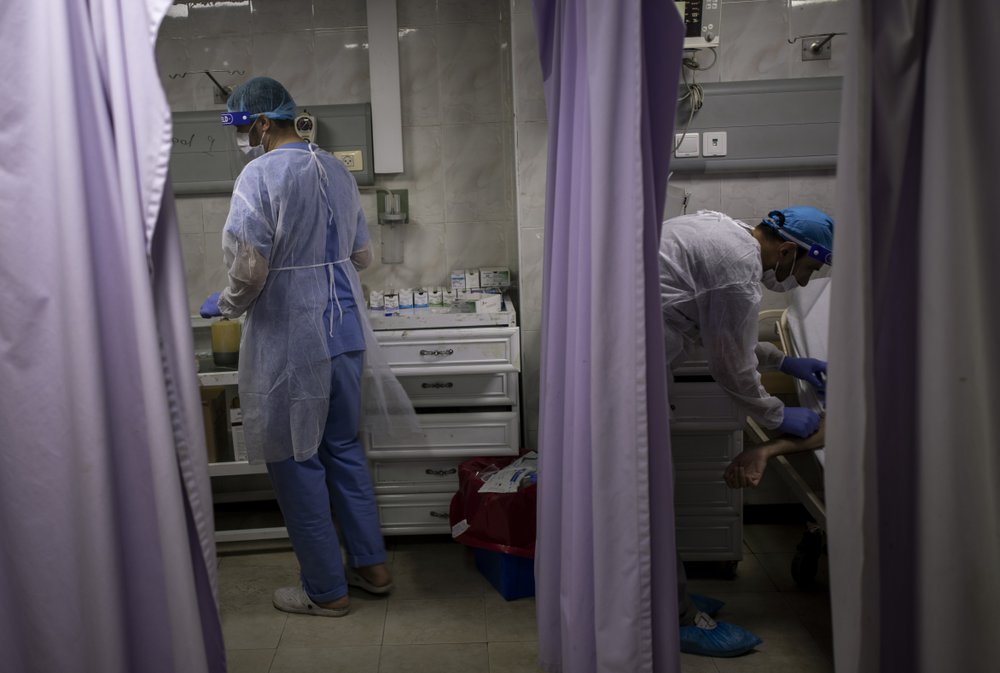 Experts have warned that a wider outbreak in Gaza could be catastrophic because of the fragile health sector. The Gaza Strip is home to two million Palestinians in cities, towns and refugee camps squeezed within an area of 360 square km (139 square miles), with its borders sealed off by neighboring Israel and Egypt.

"Gaza is probably the most densely populated place on the face of the earth so measures to contain a virus as violent as COVID-19 are always extremely difficult to put in place," said Tamara Alrifai, spokeswoman for the United Nations Relief and Works Agency (UNRWA) devoted to Palestinian refugees.

Shatat said there already was a shortage of medical workers even before the outbreak.

To help alleviate a staffing crunch, the Health Ministry has shortened the mandatory quarantine time for doctors and nurses who may have been exposed to the virus, from three weeks to two weeks. But it is still struggling to sufficiently staff the quarantine centers and isolation hospitals.

Hundreds of workers are in protective isolation due to possible exposure, and pregnant workers and those with underlying health issues are excluded. 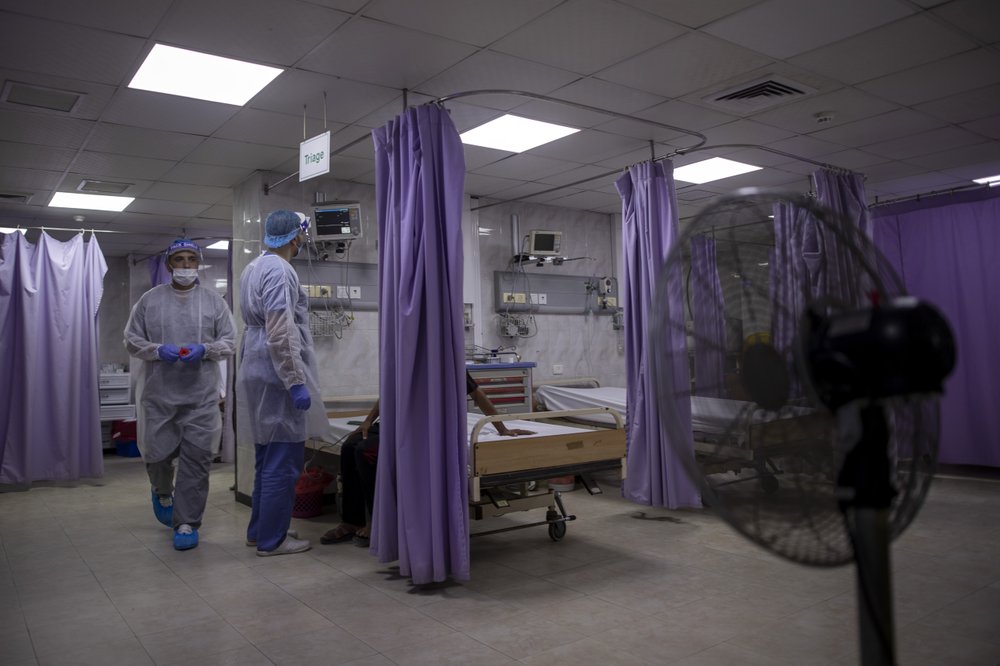 "Advanced health systems in the world could not sustain the outbreak, so how could our fragile, besieged, aid-dependent health system stand up to the crisis?" Shatat said.

After graduating from medical school in Egypt in 2008, el-Rabii returned home to Gaza to grim prospects, and the only jobs available were in the Hamas-run administration. In 2010, he was offered a job, but the cash-strapped government could not afford to pay his full salary.

"Mostly, we got 40 percent of our salaries. This makes the doctor look for extra work at private clinics and hospitals," he said.

Before he caught the virus, el-Rabii used to work 24 hours in full personal protective equipment in the sweltering summer heat. He would go home for a two-day break and return to the hospital for another 24-hour shift. "It was exhausting," he recalled.

"Now, with the coronavirus, everything has shut down, and work at private clinics has stopped so you are only left with the public job," he explained.

El-Rabii has worked at Gaza's main hospital, Shifa, for the last 10 years. After the coronavirus outbreak, he was assigned to a team treating people with respiratory disorders. A Palestinian medic checks a person's temperature to screen for coronavirus symptoms, inside a temporary tent at the entrance of al-Quds Hospital, in Gaza City, Sept. 7, 2020. /AP

Haitham Ibrahim, a laboratory specialist, has been doing nonstop tests for the past two weeks at the lab of Khan Younis hospital in the southern Gaza Strip, the second hospital where COVID-19 patients stay.

"I often fall asleep from extreme exhaustion," he said in a phone interview. "We take rests between shifts, but when you get off the heavy protective clothes you feel as if your body has melted."

Because of potential exposure during a two-week stint at work, Ibrahim is now spending two weeks in a quarantine center. When he returns home, he will have to remain in self-isolation for an additional 14 days before returning to the lab for another work cycle.

Like most public workers, Ibrahim has only been receiving 40 percent of his base salary for years. This month, Hamas' government announced a 10 percent pay increase – giving him an extra 100 shekels, or 30 U.S. dollars.

"We hope our work will be rewarded after the crisis ends. Now it's time to focus on the work and overcome the pandemic," he said.