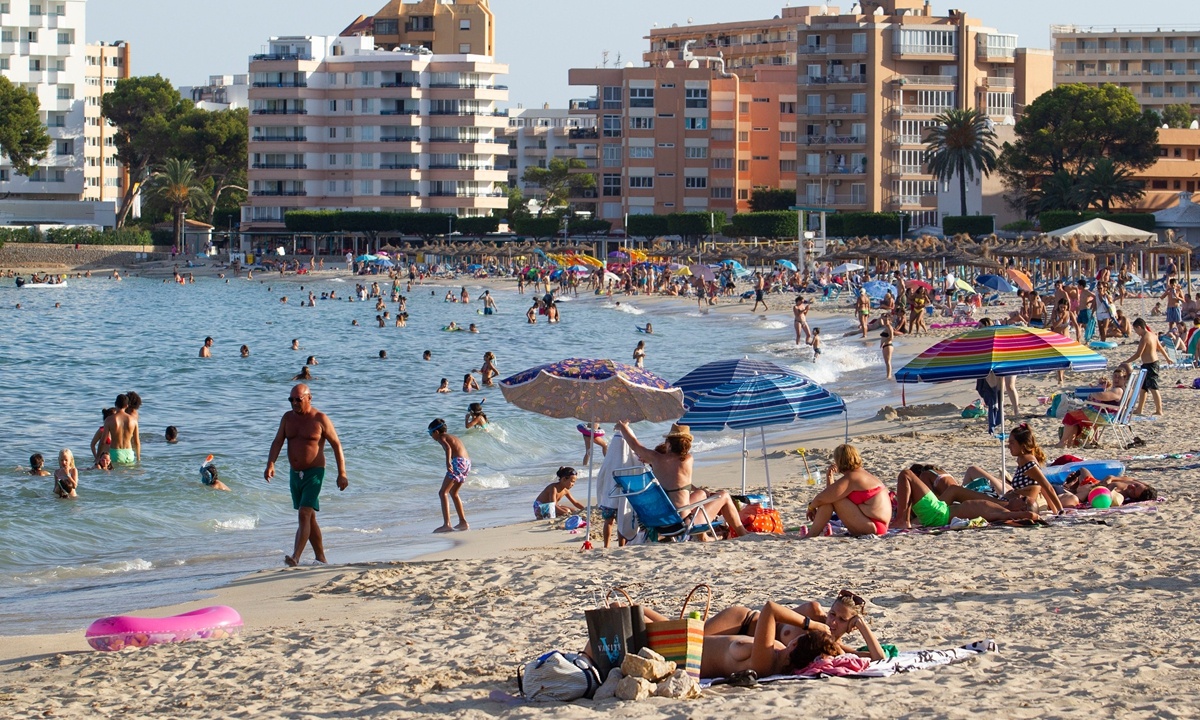 Tourists sunbathe at Palmanova Beach on the Island of Mallorca, Spain on Monday. (Photo: AFP)

As one of the world's top tourist destinations, Spain was hoping to salvage the summer by billing itself as a safe haven from the pandemic but with infections surging, all bets are off.

Britain's decision on late July 25 to impose quarantine on all travelers coming from Spain represents a huge setback - British tourists are the largest national group of visitors, with 18 million of them taking a Spanish holiday in 2019.

"It's a very tough blow" given that the tourist sector "had hoped to be able to turn things around in August," Ximo Puig, the Valencian regional president, told Cadena Ser radio.

For some resorts like Benidorm, British tourists constitute 40 percent of visitors. 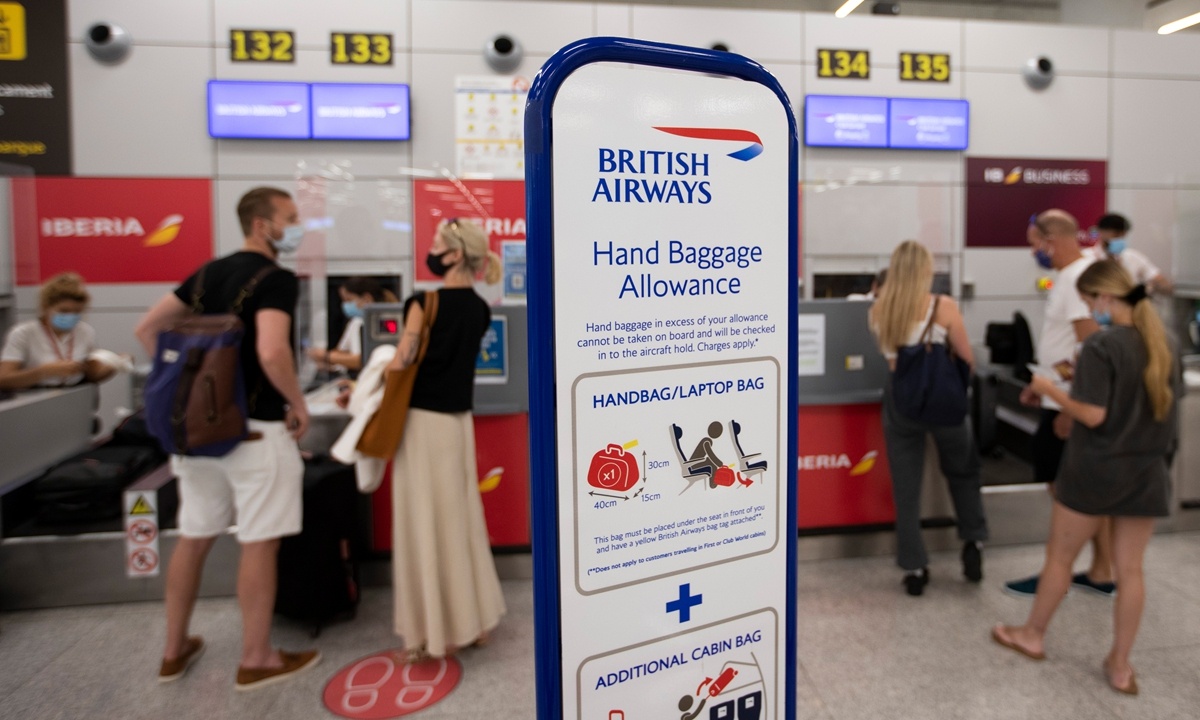 British tourists check in for a flight to London at the airport in Palma de Mallorca on Monday. (Photo: AFP)

The announcement was terrible news for the embattled sector, which had hoped the summer months would help it claw back some of the colossal losses incurred through months of lockdown.

"We'd had a good feeling about the coming weeks with reservations picking up and although we were far from the norm for this time of year, we were hoping things would get back to normal by September or October," the HOSBEC regional hotels association said.

"There have already been cancellations and more are expected. Nobody is going to come here for a week's holiday and then spend 14 days shut away when they get back home," said Emilio Gallego, secretary-general of Spain's hotels association.

The Exceltur tourism association estimates Britain's quarantine move could cost up to 8.7 billion euros in August and September, a major hit to a sector whose turnover had already been expected to halve this year.

Conscious of the impact on a sector that accounts for 12 percent of GDP and 13 percent of employment, Madrid has sought to secure an exemption for the Canary Islands or the Balearic Isles.

Although TUI, Britain's biggest tour operator, cancelled all holidays to mainland Spain, it has said it will continue holidays to the Canaries or Balearics where COVID-19 cases are markedly lower.

"I don't think that we have uncontrolled transmission of the virus in Spain right now," said Fernando Simon, the health ministry's emergencies director, indicating there were areas "where it is hardly circulating" such as the Balearic and Canary Islands.

From a health perspective, the quarantine "benefits us in a certain way because it discourages people from travelling from the United Kingdom" where the virus is also still circulating, he said.

Spain worked hard to burnish its image as a safe destination, with resorts implementing widespread measures, among them social distancing on the sand and around pools, and safe spacing within bars and restaurants.

But industry insiders have watched with concern as new infections have risen, with the figure tripling in two weeks, government figures show. 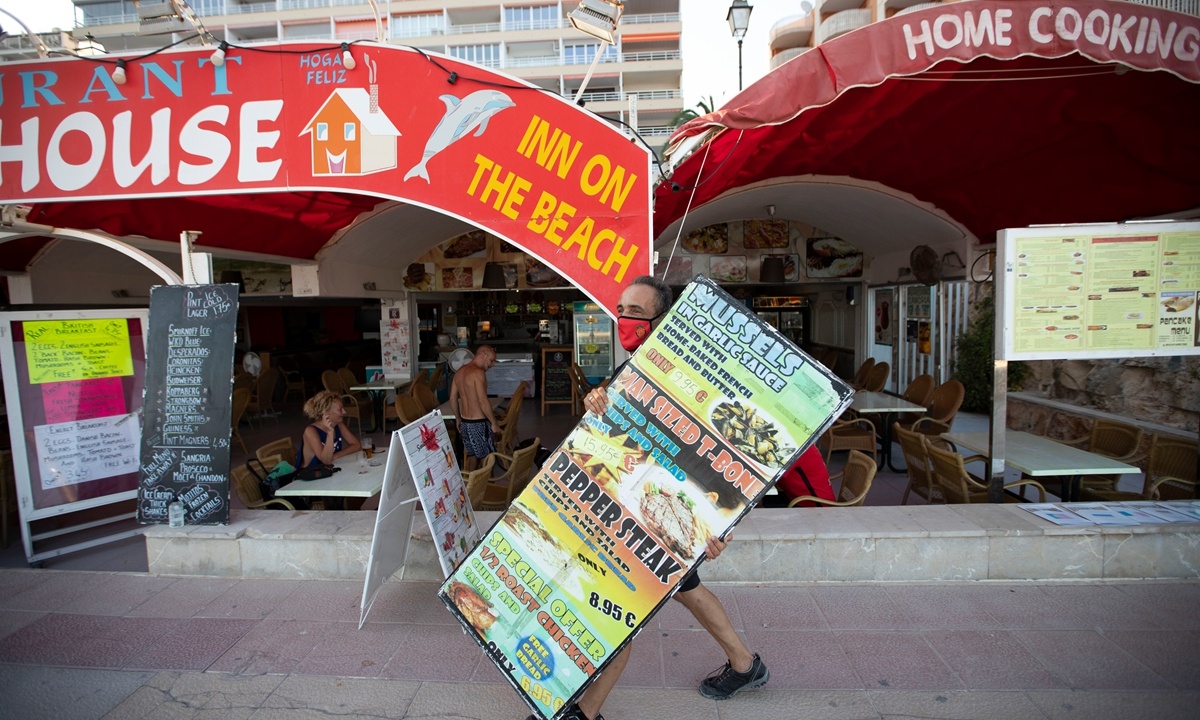 A waiter carries a banner at a restaurant near the beach in Magaluf on the Island of Mallorca on Monday. (Photo: AFP)

Over the past 14 days, Spain has seen 40 new cases per 100,000 inhabitants, compared with 15 in Britain and France and eight in Germany, according to an AFP calculation based on official figures.

In terms of deaths, however, Spain has recorded just 26 in the past fortnight, far behind Britain's 816.

Michael Ryan, the World Health Organization's emergencies director, told reporters the situation in Spain was "nowhere close" to what it was before and that Madrid had developed a "very sensitive surveillance system."

"It will take a number of days or weeks for us to see what is the future in Spain, but we trust that with this open approach, with this sensitive surveillance, with the sustained testing... we will see these clusters come under control in due course."

The situation varies hugely between regions, with Aragon and Catalonia in the northeast counting the highest number of new cases, notably in agricultural areas, while in Andalusia and Valencia, new infections were far fewer.

Although France on July 24 advised against travelling to Catalonia, regional president Quim Torra insisted Monday that the Costa Brava and the Costa Dorada "remain unaffected and people can travel there safely." 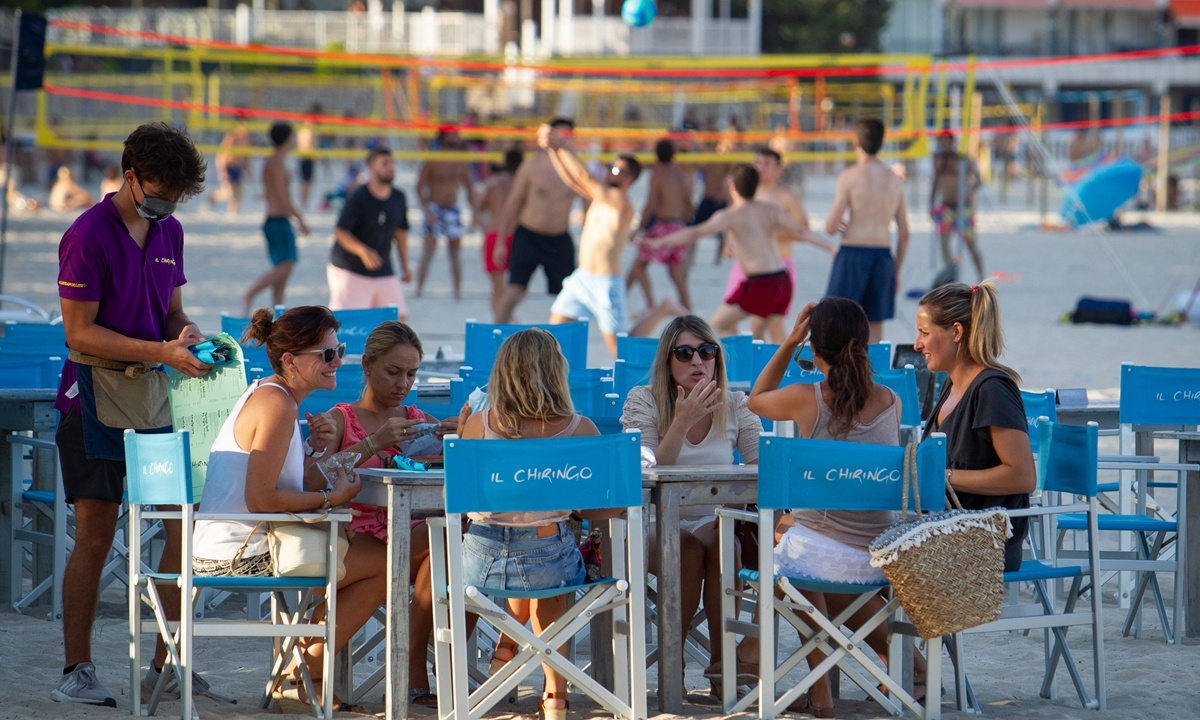 Tourists eat at a restaurant in Palmanova on the Island of Mallorca on Monday. (Photo: AFP)

The situation in metropolitan Barcelona and Lerida, however, remains "critical," with residents ordered to stay at home.

Denouncing the situation as "unjust... and totally illogical," the Spanish Confederation of Hotels and Tourist Accommodation insisted its establishments had "the strictest protocols in Europe."

It also asked that tourists be tested before travelling and again before going home to avoid the need for quarantine.