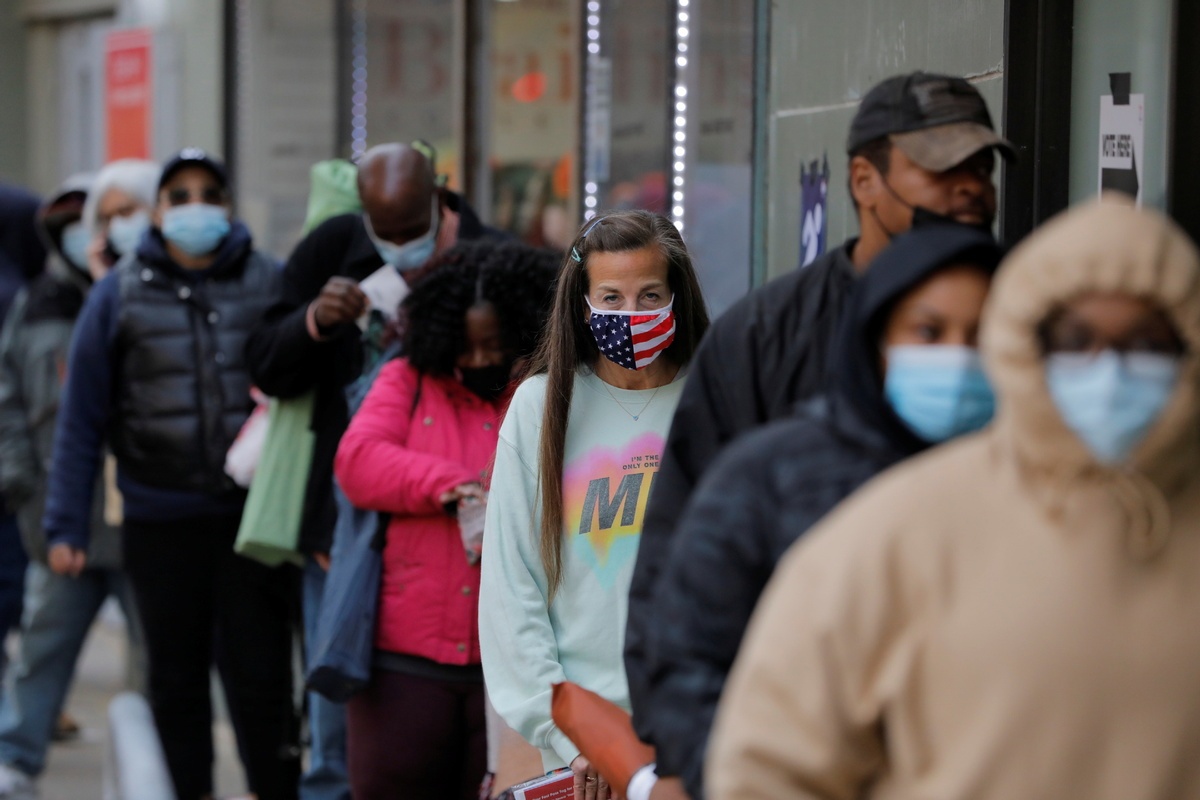 As the United States enters the last full week before its presidential election with COVID-19 being the dominant issue, much of the country is facing an unprecedented surge in coronavirus cases.

Positivity rates, hospitalizations and deaths are climbing, especially in the Midwest and West, and health officials are warning the situation will get worse.

The country had more than 8.5 million coronavirus cases as of Sunday, with more than 224,900 deaths, according to the Johns Hopkins University.

The country set back-to-back records on Friday and Saturday, reporting 83,718 and 83,757 new cases, respectively－eclipsing the previous highest single-day count of 77,362, on July 16. Cases are rising in parts of the country that had largely escaped the earlier waves of infections.

Eighteen states have reported their highest daily numbers of hospitalized COVID-19 patients since the pandemic started. On Friday the number of such patients across the country climbed to a two-month high of more than 41,000, up 34 percent from Oct 1, according to a Reuters analysis.

Friday's short-lived record for a single-day count in new infections came a day after US President Donald Trump defended his handling of the pandemic in the second presidential debate with Democratic rival Joe Biden.

The US is "learning to live" with COVID-19 and it's "going away", Trump said.

"We're learning to die with it", Biden responded, and called for much more aggressive federal action for the "dark winter" ahead.

More than 50 million ballots have been cast in early voting for the Nov 3 election. Trump continues to trail Biden in national polls, and coronavirus cases are rising in the battleground states of Ohio, Pennsylvania and Wisconsin.

The candidates gave starkly contrasting messages on the pandemic on Saturday.

Trump addressed a few thousand supporters at a tightly packed outdoor rally in North Carolina. He again said the US was turning the corner in the fight against COVID-19 and mocked Biden's more cautious campaigning style.

Biden addressed supporters in vehicles at two drive-in rallies in Pennsylvania and warned of a grim winter ahead unless the Trump administration did a better job of halting the disease.

In Lumberton, North Carolina, Trump told supporters he was offering a fast recovery from the economic damage wrought by virus lockdowns.

"It's a choice between a Trump super boom and a Biden lockdown," the Republican president said. "We are rounding the turn."

Late on Saturday a spokesman for Vice-President Mike Pence disclosed that Marc Short, Pence's chief of staff, had tested positive for the coronavirus. Pence and his wife tested negative earlier in the day, the spokesman said.

Biden told supporters that the cold months ahead could be even harsher due to a resurgence of the virus. He was addressing supporters in the town of Bristol who had gathered in pickup trucks and cars, with numbers limited to reduce the risk of infection.

On the medical front, the Food and Drug Administration said on Thursday that it had approved remdesivir as the first antiviral drug to treat COVID-19 for patients requiring hospitalization.

More than 170 counties across 36 states have been designated rapidly rising virus hot spots, according to an internal federal report produced for officials at the Department of Health and Human Services, The Washington Post reported on Saturday.