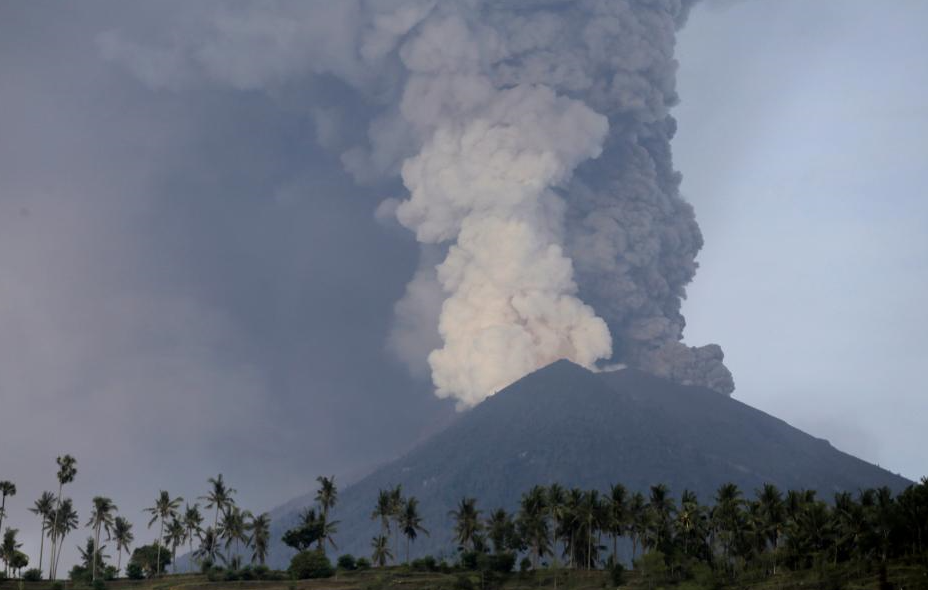 A rumbling volcano on Bali could erupt at any moment, authorities warned Monday as they raised alert levels to maximum, accelerated a mass evacuation and closed the main airport, leaving thousands of tourists stranded on the Indonesian resort island.Massive columns of thick grey smoke that have been belching from Mount Agung since last week have now begun shooting more than three kilometers into the sky, forcing hundreds of flights to be grounded.Some 40,000 frightened people have fled their homes around the volcano but as many as 100,000 will likely be forced to leave, disaster agency officials said, after raising the alert to its highest level.The exclusion zone around Agung, which is 75 kilometers from the beachside tourist hub of Kuta, has also been widened to 10 kilometers.Makeshift tents and community centers filled up Monday as nearly two dozen villages were emptied of their inhabitants, including farmers reluctant to leave precious livestock behind. "Continuous ash puffs are sometimes accompanied by explosive eruptions and a weak booming sound," the National Board for Disaster Management said earlier Monday."The rays of fire are increasingly observed at night. This indicates the potential for a larger eruption is imminent."Agung rumbled back to life in September, forcing the evacuation of 140,000 people living nearby. Its activity decreased in late October and many returned to their homes.However, on Saturday the mountain sent smoke up into the air for the second time in a week in what volcanologists call a phreatic eruption - caused by the heating and expansion of groundwater.Then on Monday so-called cold lava flows appeared - similar to mud flows and often a prelude to the blazing orange lava seen in many volcanic eruptions."I'm very concerned because I left my house behind and I'm also worried about family," said 36-year-old farmer Putu Suyasa, who fled with some relatives from a village eight kilometers away from the volcano."The mountain is spewing thicker smoke than before."Dewa Gede Subagia was a teenager when Agung last roared."I am very worried because I have experienced this before," the now 67-year-old told AFP from one evacuation center.