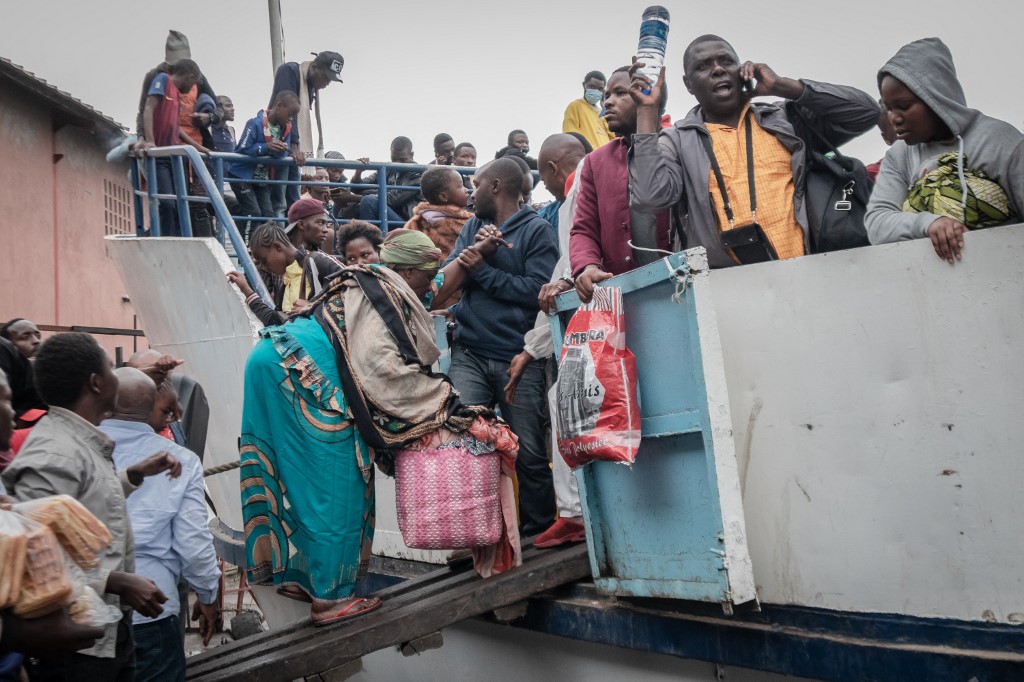 Goma residents are seen boarding a ferry after an evacuation order has been given on May 27, 2021. (Photo: AFP)

Tens of thousands of people fled the eastern DR Congo city of Goma on Thursday towards neighbouring Rwanda after authorities warned of possible new eruptions from the Nyiragongo volcano, including underneath the nearby Lake Kivu.

The city has been on edge since Africa's most active volcano erupted on Saturday, leaving at least 32 people dead.

"Right now we can't rule out an eruption on land or under the lake, which could happen very soon and without warning," said General Constant Ndima, the military governor of North Kivu province.

He said an evacuation of part of the city had been ordered, and urged residents to leave calmly.

Tens of thousands of residents fled Goma last weekend after Nyiragongo erupted on Saturday night -- many across the nearby border to Rwanda -- before returning.

But strong aftershocks have continued to rattle the city, leading some buildings to collapse and leaving residents fearful.

The volcano spewed out two rivers of molten rock during the eruption, one of which came to halt on the edge of Goma after obliterating villages in its wake.

Local volcanologists have recorded hundreds of aftershocks since Nyiragongo, which sits just a dozen kilometres (eight miles) from Goma, roared back into life.

Ndima said that the latest data including on "deformation of the ground indicates the presence of magma under the urban area of Goma, with an extension under Lake Kivu".

"The situation can change rapidly, and is being constantly monitored," he said in a broadcast address.

The governor said there were extra risks associated with the interaction between magma and the lake, including "the emission of potentially dangerous gases at the surface".

Ndima said authorities had arranged transport towards Sake, around 20 kilometres (12 miles) west of Goma, in each of the ten districts of the city affected.

"People should take the bare minimum with them, to make sure everyone has a chance to get on," he added.

The announcement was followed by the immediate departure of tens of thousands of people towards the southwest, in the direction of the Rwandan border, an AFP correspondent said.

Vehicles of all kinds, including cars full of families, vans and trucks waited to cross into Rwanda.

The streets in the southern part of Goma were congested, with people walking or running, carrying mattresses, sports bags or a few meager possessions in plastic bags, and holding on to frightened children.

Despite the traffic jams and the sudden influx, the crossing to Rwanda was proceeding in relative calm, while lines of vehicles were also heading toward Sake.

"It is very important to stay away from the lava flows, because of the danger of death from suffocation or burns.

"The police will patrol to secure property and people," he said, concluding his remarks with: "May God look after us."

The United Nations said 32 people have died and 5,000 are feared to be homeless.

The UN humanitarian affairs office OCHA said 24 of the victims were burned alive by lava, adding that 40 adults have been reported missing.