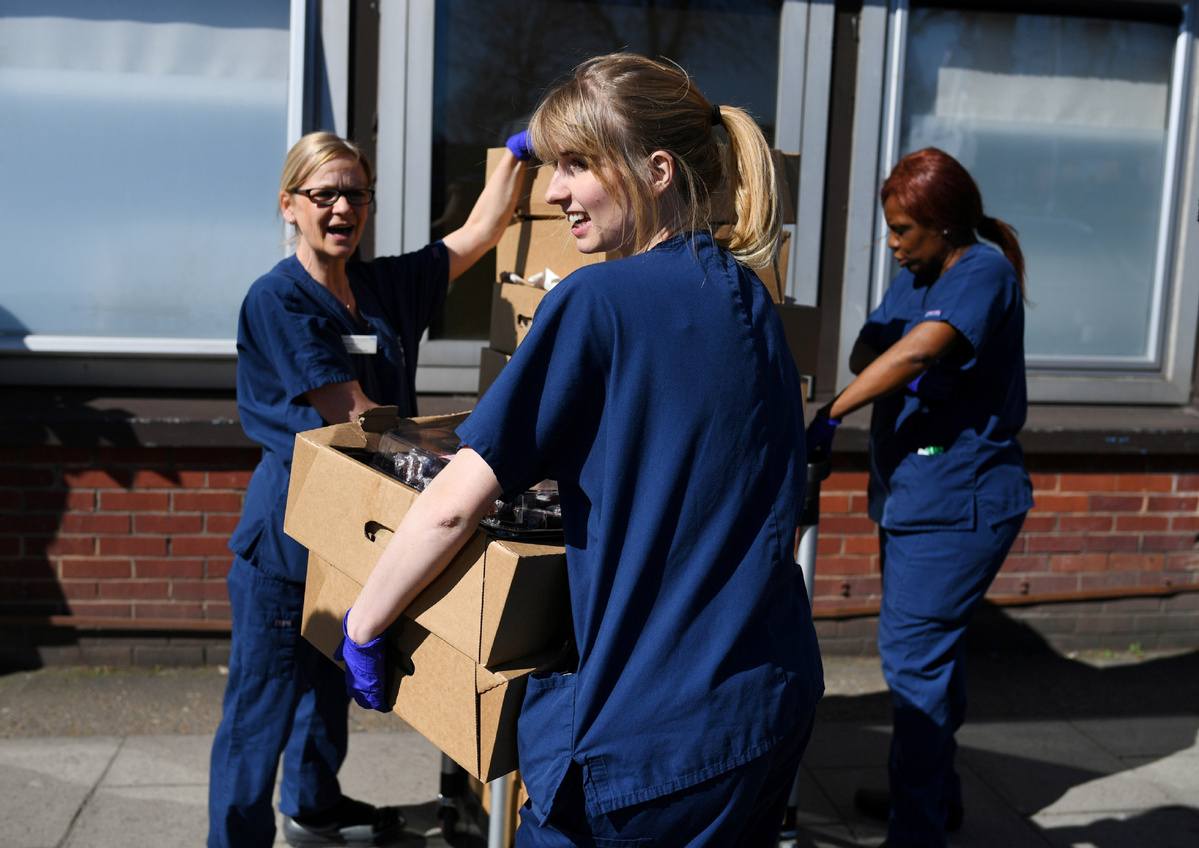 Nurses and staff carry food delivered by volunteers outside St George’s Hospital as the spread of the coronavirus disease (COVID-19) continues, in London, Britain, March 23, 2020. (Photo/Agencies)

Community volunteer efforts are rapidly mobilizing across the United Kingdom and Europe in response to governments' measures to protect those most at risk during the novel coronavirus outbreak.

The pandemic has left many people feeling trapped indoors, but tens of thousands of volunteers have offered to help by shopping for urgent supplies, or just by simply keeping in touch.

In a matter of days, and mostly through use of social media, organizers have quickly assembled specialist support groups, reports the BBC.

Britain's Health Secretary Matt Hancock said on Sunday that the growing virus outbreak meant "the elderly and vulnerable" would be asked to "shield themselves by self-isolating".

ITV News highlighted Mutual Aid and other community support groups that have promptly been launched with neighbors, volunteers, councilors and anyone with free time grouping together. Some local groups cover entire cities, while others are focused on individual streets, estates or a single block of flats.

Groups, named COVID-19 Mutual Aid, have been set up in most London boroughs, and cities including Manchester, Newcastle and Birmingham, as well as smaller towns throughout the UK.

"As a young person who's not at a high risk of dying, you feel responsible," said 17-year-old student Eleanor Anrade May, who helped set up the Devon Mutual Aid Group.

The Liverpool Echo reports that the council is asking people to help with tasks such as helping to pick up medication, or to work in food banks.

On Saturday, the Guardian reported that major UK supermarkets have been asked to set aside supplies for food banks after several emergency food aid charities closed and others struggled to meet rocketing demand.

Many food banks said they were finding it impossible to replenish food stocks, and others said they had been overwhelmed as hundreds of elderly volunteer regulars were forced to go into self-isolation.

Liverpool Council said around 500 volunteers will launch a new hub in one of the city's leisure centers where packs will be created and delivered to those in need.

The local authority said more than 50 different community organizations will help to build a new citywide network to help support the city's most vulnerable and isolated.

In the Suffolk market town of Beccles, a COVID-19 Facebook group quickly gained 1,000 members. The Eastern Daily Press reports that the group aims to give "proactive practical solutions".

Councilor Elfrede Brambley-Crawshaw, who founded the group with Councillor Caroline Topping, said: "Nothing like this has happened in anyone's lifetime and the fact the community are working together is such a positive－we should focus on the positives over the next few weeks.

"I realized instantly people want to help and it was important to do that in a safe and constructive way and bring people together rather than people doing separate things."