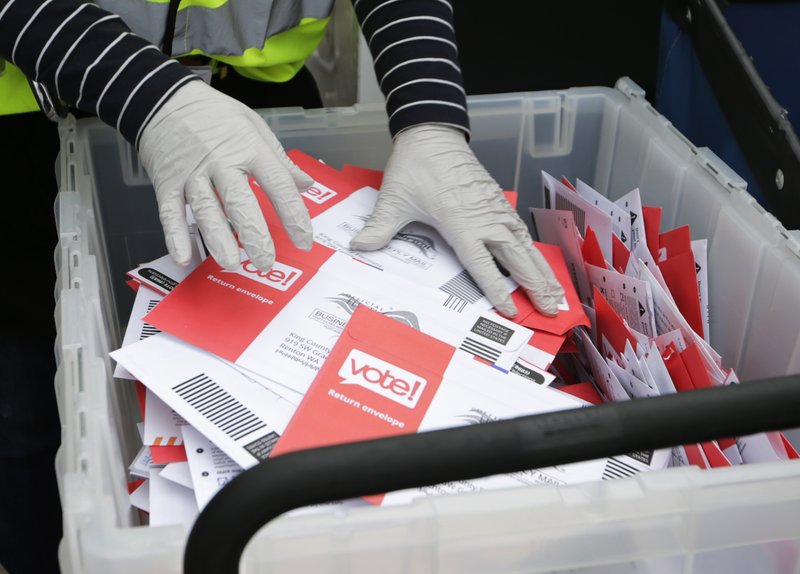 In this March 10, 2020, file photo wearing gloves, a King County Election worker collect ballots from a drop box in the Washington State primary in Seattle.(Photo: AP)

A bitterly partisan debate unfolding on whether more Americans should cast their votes through the mail during a pandemic is provoking online disinformation and conspiracy theories that could undermine trust in the results, even if there are no major problems.

With social distancing guidelines possibly curtailing in-person voting at the polls in November, states are drawing up plans to rely more heavily on a mail-in system that has until now seen only limited use.

Historically, there is no evidence of widespread voter fraud through mail-in voting. But social media users are already pushing grandiose theories casting doubt on the method. President Donald Trump has encouraged the skepticism, saying during a televised briefing that “a lot of people cheat with mail-in voting.” On Saturday, he tweeted: “Don’t allow RIGGED ELECTIONS!”

Justice Department officials are concerned foreign adversaries could exploit any vulnerabilities in the vote-by-mail process, especially since even minor tampering could trigger widespread doubts about the integrity of the vote.

“Is it possible, in particular for a foreign actor, to cause enough mischief in the vote-by-mail process to raise a question in the minds of Americans, particularly Americans perhaps whose candidate has lost, that somehow the result of this election is unfair?” Assistant Attorney General John Demers, the department’s top national security official, said in describing a key question confronting law enforcement.

Several disinformation experts said they have not found evidence yet that foreign actors are covertly pushing a false narrative about mail-in voting.

But a sham social media campaign that feeds existing doubts about the U.S. election process would align with the Kremlin’s playbook, said Bret Schafer, a media and digital disinformation fellow at the Alliance for Securing Democracy, a Washington think tank. During the 2016 election, Russia-linked groups polluted American voters’ social media feeds with messages about hot-button topics like race relations, gun laws and immigration.

“You don’t have to hack the vote to hack people’s perception of the vulnerability of the vote,” he said. “All you need to do is to seed enough doubt about the legitimacy of a vote.”

Well before the coronavirus upended America’s electoral process, federal officials were girding for the prospect of foreign interference in the U.S. election. The FBI and the Department of Homeland Security warned in February that Russia could seek to misuse voter registration data and even secretly advise campaigns or candidates, according to documents The Associated Press obtained.

Now, a potential overhaul of how millions of Americans vote could present new vulnerabilities for foreign adversaries to weaponize.

Only five states currently conduct mail-in voting, where a ballot is automatically mailed to every eligible voter.

The remaining states have substantial work in the months ahead. They will have to make major changes to their voting and tabulating systems, buy equipment or software to track the ballots and sort out who — individual voters or taxpayers — will pay for return postage in less than six months’ time to accommodate more voting by mail.

Some states are exploring how to simply expand existing absentee voting systems, in which voters can request a ballot.

“Just like you wouldn’t want to premiere your play straight to Broadway, it’s hard to have a very new or very changed system in a high-stakes presidential election, especially under conditions where normal meetings, trainings, might be impacted by the pandemic,” said Richard Hasen, an election law expert at the University of California, Irvine.

Those last-minute changes could spur unsubstantiated claims about rampant voter fraud, an unsupported theory that Trump and some of his supporters have already pushed for years.

Russian state media have already questioned states’ attempts to postpone primaries or transition them to a mail-in process as governors grapple with how to hold an election against the backdrop of the virus.

“Coronavirus is coming, hide the ballots! Calls to cancel campaigns & voting erode already-thin trust in US primaries,” read a headline on the website of the Russian television channel RT, which broadcasts in English and is aimed at audiences outside Russia.

Meanwhile, conspiracy theories that Democrats are hyping the pandemic to push for mail-in voting or that forecasts of a second wave this fall are part of a ploy to cancel an in-person vote have received thousands of likes, retweets and shares on Facebook, Twitter and Reddit. The theories are popular in dozens of Facebook groups that have been created in recent weeks to protest governors’ stay-at-home orders.

“When you have this ambiguity and uncertainty, that’s fertile ground for pushing out false information,” said Schafer, the think tank fellow. “This is creating a perfect environment for these narratives to thrive.”

One popular meme accused Democrats of extending the quarantine to push “mail in ballots so they can cheat.” The image received a combined 90,000 likes, comments and shares, mostly on pro-Trump and conservative Facebook pages.

And for under $100, the Alaska Republican Party took out a Facebook ad that said: “Democrats are using the coronavirus pandemic to gut election fraud protections. Don’t let them. Add your name to our petition to STOP BALLOT HARVESTING!” Facebook said the ad, which is still running, does not violate its policies.

Meanwhile, liberal social media users are pushing mail-in voting as a surefire option, glossing over some of the challenges such drastic changes to the voting system will present.

Facebook groups like Occupy Democrats and Being Liberal widely circulated an article promoting vote by mail, saying it has a history of success because the U.S. military has used the method for decades.