Voters’ 2nd choices could be decisive in close Iowa caucuses 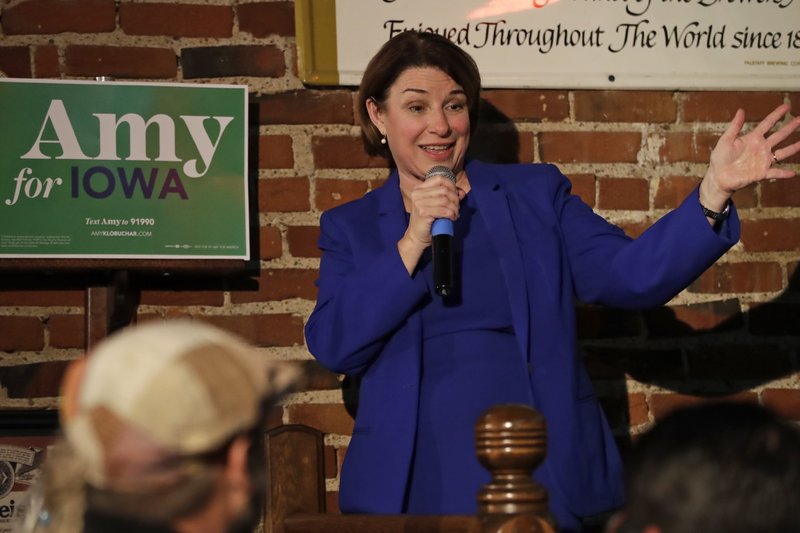 Democratic presidential candidates seeking victory in next week’s Iowa caucuses are navigating a field that is so jumbled that voters’ second choice could matter almost as much as their first, adding fresh uncertainty and confusion to the final days of the race.

Lower-polling candidates including Amy Klobuchar, Andrew Yang and Tom Steyer have been approached by multiple campaigns in recent days eager to form an alliance that could reshape Monday’s election. Joe Biden’s team has been in communication with lower-polling rivals, according to several people familiar with the conversations who spoke on condition of anonymity to discuss internal strategy.

The former vice president’s campaign dismisses such reports of potential deal-making as dramatized accounts of business as usual. But the delicate overtures are a test of the leading campaigns’ ability to assemble a winning coalition and the capacity of second-tier candidates to stay relevant. And it could be decisive in determining who leaves Iowa with the momentum that will be needed to sustain a long campaign ahead.

“The second-place phenomenon, at least in Iowa, is not a bad thing at all,” said Iowa state Sen. Zach Wahls, who supports Massachusetts Sen. Elizabeth Warren.

In contrast to a traditional election, the caucus system works like this: Voters gather at dozens of caucus locations across the state and start the night by pledging support for their preferred candidate. After the initial vote count is taken, voters backing candidates who earn less than 15% are free to shift to other candidates or go home.

While a dozen Democrats are still running for president, just four — Biden, Warren, Bernie Sanders and Pete Buttigieg — have consistently polled above the 15% threshold in Iowa. Still, any of the four could see their support fall short, depending on who shows up to caucus.

As is the case with Biden and others, Warren sees an opportunity to draw significant support from Klobuchar, who has not reached the 15% threshold in polls to date, even as the Minnesota senator’s standing appears to have improved in recent weeks.

“It’s certainly no secret that Sen. Warren ... has the highest favorables of anybody in the field within Democratic primary voters,” Wahls said. “I can tell you anecdotally that she is the second choice of a lot of Klobuchar supporters.”

Klobuchar’s team, aware that she’s viewed as a source of second-choice votes from several campaigns, downplayed the possibility of a potential deal when asked about conversations with rival campaigns.

Klobuchar’s Iowa adviser Norm Sterzenbach said the campaign was more focused on trying to win over supporters of other campaigns.

“Caucusgoers are going to go to their second choice because that’s who they like, not because of anything we tell them to do,” he said. “I just think it’s a waste of energy for us to focus our time on trying to make deals.”

To say the situation is fluid would be an understatement.

Just four days before the Iowa contest, polling suggests that more than half of the state’s likely Democratic voters are open to changing their minds.

Forty-five percent of all likely Democratic caucusgoers named a first choice but said they could be persuaded to support another candidate, and 13% did not indicate a first choice, according to the CNN/Des Moines Register poll conducted earlier this month.

At the same time, history holds few examples of final-days deals between rival campaigns that had a significant effect.

One may be in 2004, when North Carolina Sen. John Edwards and Ohio Rep. Dennis Kucinich struck a deal to support each other. While Edwards was already surging at the time, the pact was more aimed at hurting former Vermont Gov. Howard Dean.

Should history repeat itself in 2020, top-tier campaigns see major opportunity in Klobuchar, who appears to be on the rise yet has struggled to hit the viability threshold. They’re also eyeing Tulsi Gabbard, Steyer and Yang, who have been mired in the single digits for months.

Yang acknowledged this week that multiple campaigns have reached out to his team about potential alliances.

Speaking to reporters on Wednesday, he said he’s not planning to urge his supporters to head to a specific second choice if he doesn’t make it past the first round of voting.

“Right now we have no guidance for our caucusgoers who don’t find us to be viable,” he said, downplaying his ability to direct his voters toward any specific candidate, even if he wanted to.

“The people that support my campaign are very diverse in their leanings,” he added. “I frankly think I’d have a hard time getting them to do anything that they weren’t naturally inclined to do.”

Yang conceded that Sanders, if anyone, might be best-positioned to inherit his support. And there was anecdotal evidence suggesting Yang was right.

Victor Cornejo, a 45-year-old engineer who attended a Sanders campaign event in Iowa City, said he was still deciding between businessman Yang and Sanders. He guessed he may get the chance to caucus for both if the proceedings go multiple rounds.

“I like Andrew Yang because he has a different approach, and he sees an economic approach to the future. I like the fact that he’s an outsider,” Cornejo said. “Bernie has been around for a while, and there’s some stability in that. And that actually brings some of the trust.”

A Biden aide, meanwhile, privately acknowledged regular conversations with other campaigns, but downplayed reports that Biden was actively trying to cut any deals.

The aide, who spoke on the condition of anonymity to share internal strategy, expressed confidence in Biden’s ability to pull from other candidates and pointed to polls suggesting some overlap with Klobuchar and Buttigieg.

While Biden would not confirm his own campaign had conferred with the Yang or Klobuchar teams, he acknowledged that horse-trading is routine in the caucus process.

“Everybody’s looking and says, OK, if your guy doesn’t win or your person doesn’t win, who are you gonna go with?” Biden said in Iowa on Thursday.

“We are a movement of vote your conscience. We don’t have a strategy of telling people to ‘Go here. Go there,’” Rebik said. “And, in the off chance that that doesn’t work out for us, we expect our voters to do what they do, trust their gut and go for their second choice.”