WORLD Voters sending a record number of women to House

Voters sending a record number of women to House 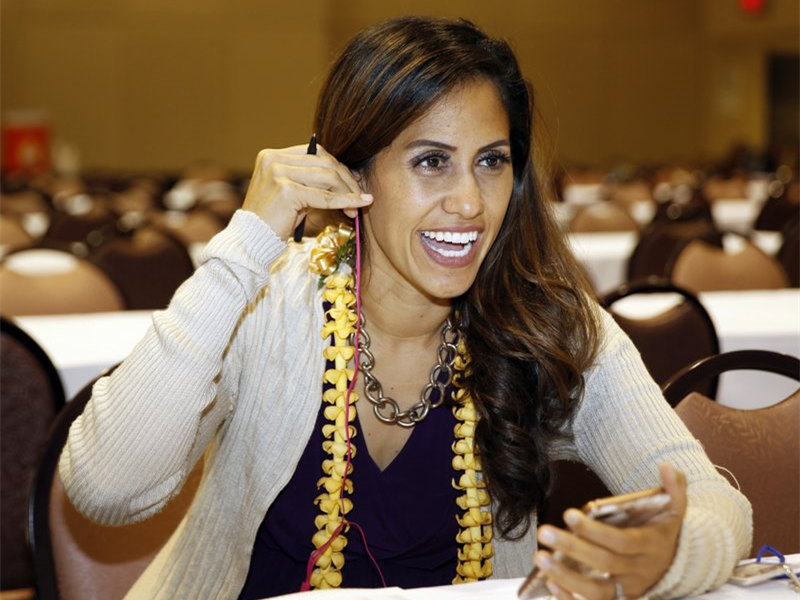 A record number of women were elected to the House Tuesday, nearly two years after women spilled out into the streets of Washington and in cities across the country in defiance of the inauguration of President Donald Trump.

The incoming class of lawmakers could have a stark impact on politics in the nation's capital, particularly within the Democratic Party, after a midterm election that was widely seen as a referendum on Trump's first term.

As of early Wednesday morning, voters were on track to send at least 99 women to the House, surpassing the previous record of 84. According to data compiled by The Associated Press, 237 women ran for the House as major-party candidates this year.

Among the new lawmakers headed to the House is Jennifer Wexton, a Virginia state senator who defeated incumbent Barbara Comstock in one of the most closely watched races across the country. And Alexandria Ocasio-Cortez, the former Bernie Sanders organizer who won an upset primary victory over a senior House Democrat, will also head to Congress. 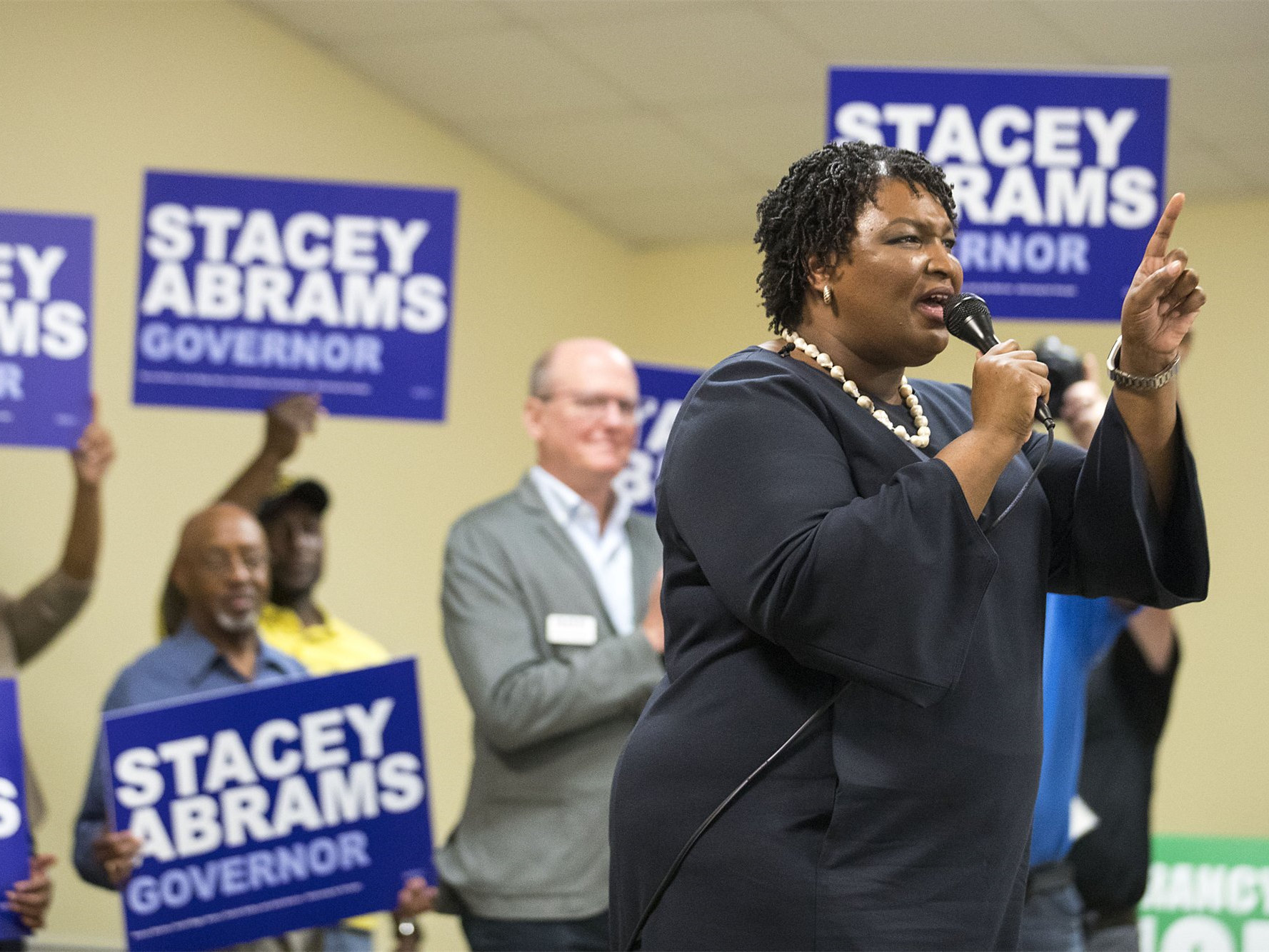 Georgia gubernatorial candidate Stacey Abrams speaks at the Macomber Recreation Building during a "Get Out The Vote" rally in Rincon, Ga., Monday, Nov. 5, 2018.

The Election Day gains by women were the capstone on a midterm election that has been defined by the energy of women, both on the political left and right. Women not only ran for office at an unprecedented rate, several knocked off white, male incumbents during their party primaries. They mobilized on the grassroots level, and played larger roles as donors than in previous election cycles.

There was also a historic gender gap that showed women more supportive of Democrats than Republicans. According to VoteCast, women voted considerably more in favor of their congressional Democratic candidate: About 6 in 10 voted for the Democrat, compared with 4 in 10 for the Republican. Men, by contrast, were more evenly divided in their vote.

In victory speeches across the country, women acknowledged the groundbreaking year.

"I am so honored to share both the ballot and the stage with the many visionary, bold women who have raised their hand to run for public office," said Ayanna Pressley, who became the first black woman elected to Congress from Massachusetts. "Now, listen, I know for a fact none of us ran to make history, we ran to make change. However, the historical significance of this evening is not lost on me. The significance of history is not lost on me, including my personal one." 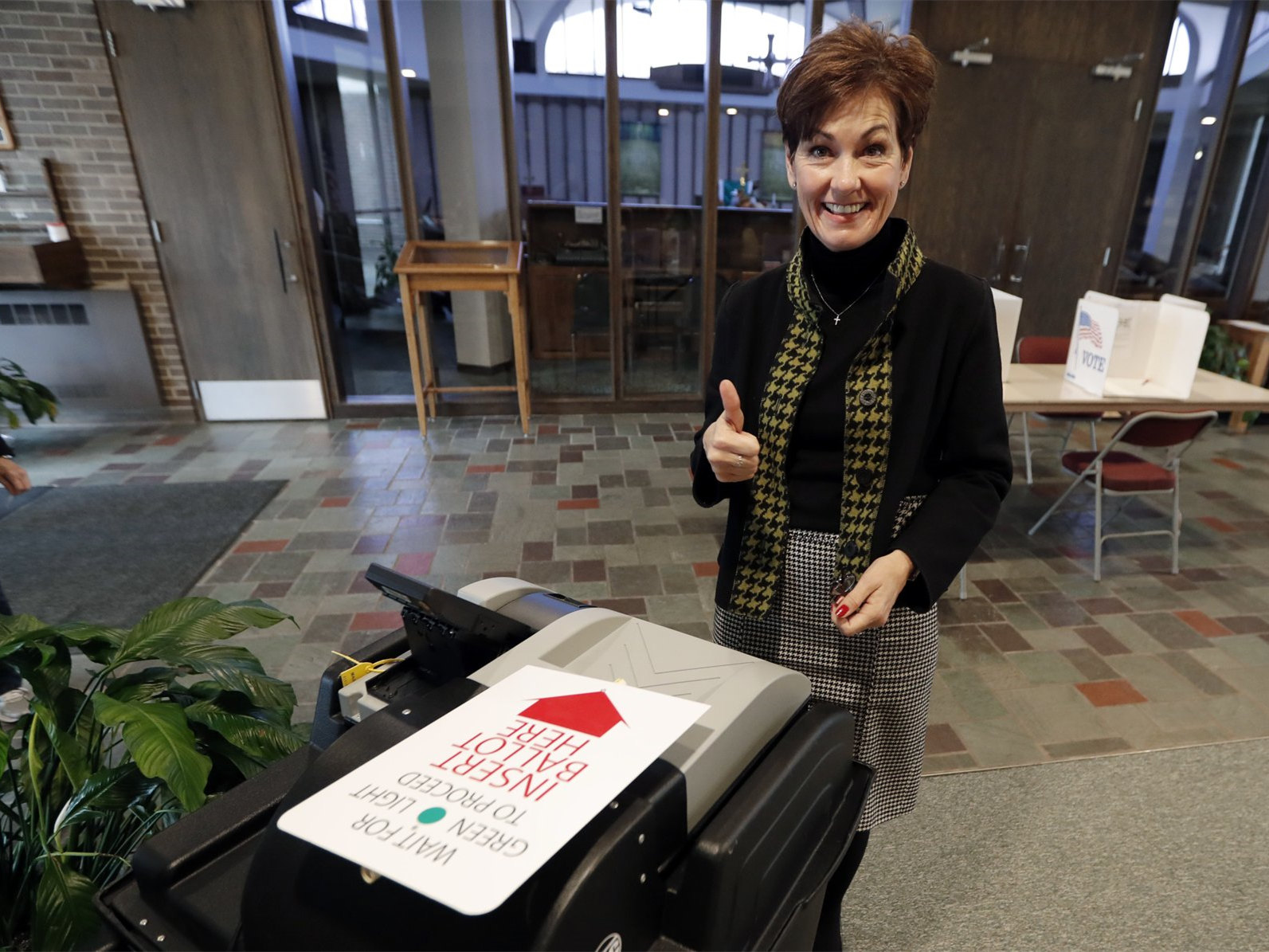 Iowa Gov. Kim Reynolds reacts after casting her ballot in the general election, Tuesday, Nov. 6, 2018, at the United Methodist Church in Osceola, Iowa.

Former Health and Human Services Secretary Donna Shalala acknowledged that both of her opponents in the race for a House seat from Florida were women.

"This is the year of the woman, and the fact that women were willing to put themselves on the line is important, whether they've been Republicans or Democrats," said Shalala, a first-time candidate for elected office.

Women also contested governor's races across the country. Twenty-two states have never elected a woman as governor, and six states have female governors today. This year, women tied the record for most governor's seats women have ever held — nine — a number that was previously reached in 2004 and 2007. Stacey Abrams, one of 16 women running for governor this year, remains in a tight contest in Georgia.

The surge of female candidates this year has drawn comparisons to the "Year of the Woman," when in 1992 voters sent 47 women to the House, and four women joined the Senate bringing women's numbers to six.

This year, women not only increased their numbers, but the new class of lawmakers includes women from a wide patchwork of backgrounds, adding to a Congress that is expected to be more diverse. 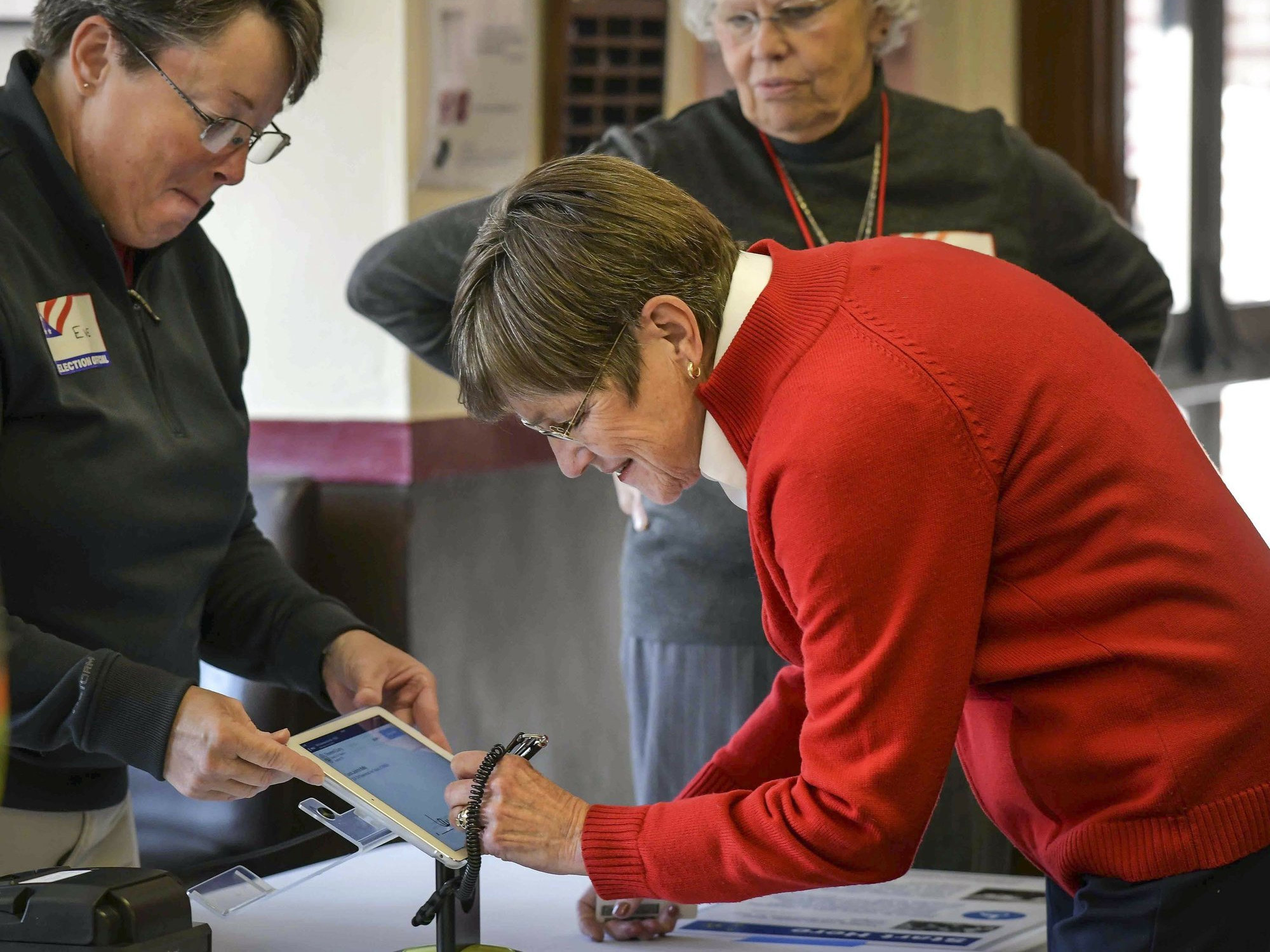 "This isn't just the year of the woman, this is the year of every woman," said Cecile Richards, who served as the president of Planned Parenthood for more than a decade, noting the groundbreaking diversity among the women who have run for office this year.

Texas is set to send its first Hispanic women to Congress, as Democrats Veronica Escobar and Sylvia Garcia both won their races. In Kansas, Sharice Davids, a Democrat running in a suburban Kansas City district, will become one of the first Native American women elected to Congress, and the first openly LGBT person to represent Kansas at the federal level.

While women gained in the House, results were still uncertain in the Senate, where there are currently 23 women serving. As of early Wednesday morning, 22 women were headed to the Senate. Ballots were still being counted in California and Nevada.

"Now you don't have to worry if you're going to call me congressman, or congresswoman or congress lady," Blackburn said in her victory speech. "Now, senator will do." 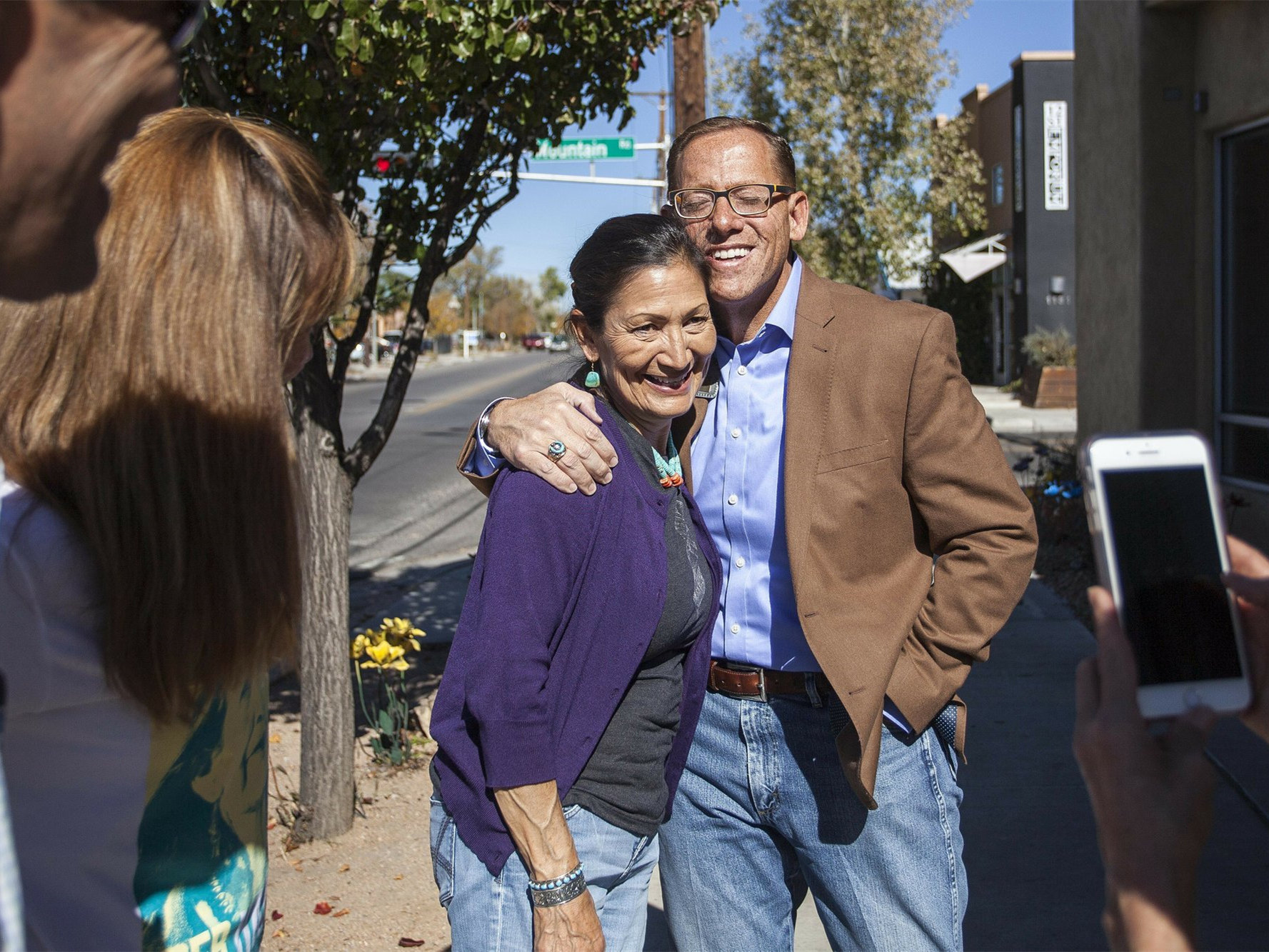 Also in the Senate, Wisconsin Sen. Tammy Baldwin held off a challenge from Republican Leah Vukmir, but her fellow Democrats Heidi Heitkamp of North Dakota and Claire McCaskill of Missouri were defeated by their Republican opponents.

The gains among women on Capitol Hill come as potential Democratic candidates for president are already taking steps to challenge Trump, several prominent female Democrats among them.

Massachusetts Sen. Elizabeth Warren, one of the Democrats who is considering the 2020 race, said that the two years since Trump ascended to the White House had ushered a new generation of women into public life.

"They refused to let anyone shut them up or stand in their way, and that is how real change begins," she added.