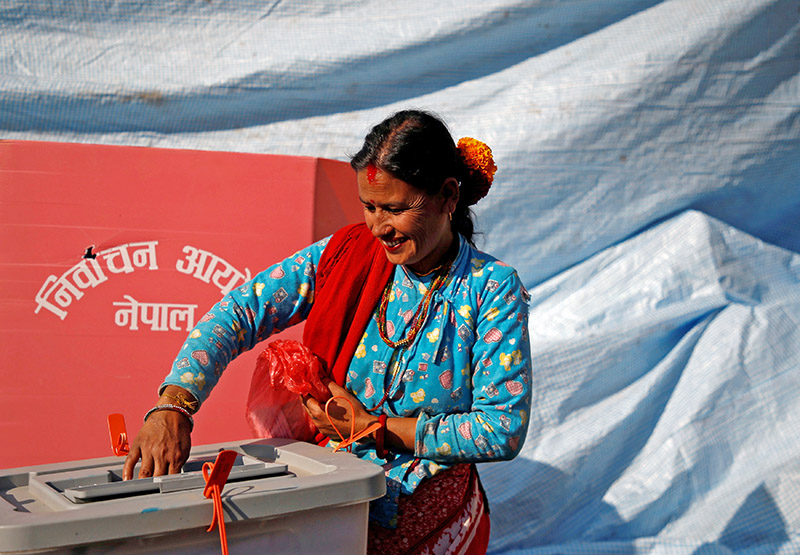 KATHMANDU, Nov. 20 (Xinhua) -- Nepalis went to the polls on Sunday morning for elections to the House of Representatives of the federal parliament and seven provincial assemblies.

Voters were seen lining up at some polling stations as the voting began at 7:00 a.m. local time. About 17.988 million voters are eligible to elect 275 members to the lower house and 550 members to the seven provincial assemblies.

"The voting has commenced peacefully across the nation," Surya Aryal, deputy spokesperson for the Election Commission, told Xinhua. "We expect the voting to continue smoothly the whole day."

Some voters said they were excited as they saw the voting as an opportunity for them to elect the right candidates to the House of Representatives and the provincial assemblies.

"I'm voting with the hope that the one who gets elected will work for the betterment of our place," said 41-year-old Jeevan Khatri from Bhaktapur, a city in the Kathmandu Valley.

Nepal has adopted a mixed electoral system, in which 60 percent of the representatives to the lower house and the provincial assemblies are elected through the fast-past-the-post voting system, while the remaining 40 percent are filled through the proportional representation system.

As many as 2,412 candidates are in the race for the 165 seats in the lower house under first-past-the-post, and 2,199 for the 110 seats under the proportional representation system.

Similarly, 3,224 candidates are competing for 330 seats to seven provincial assemblies under first-past-the-post, and 3,708 for the 220 seats under the proportional representation system.

Observers from some countries are monitoring the elections, and the voting closes at 17:00 p.m. local time.