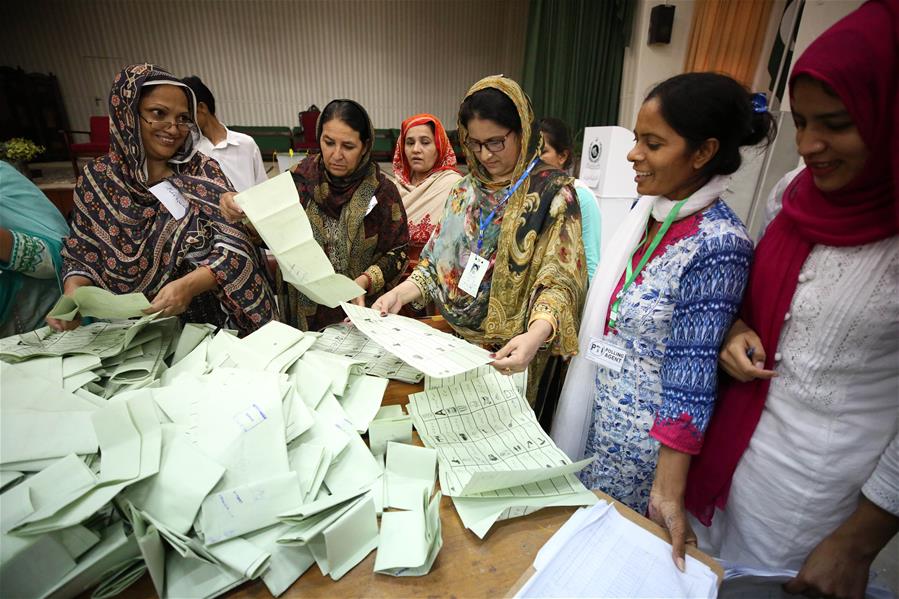 Election officials count votes in Islamabad, capital of Pakistan, on July 25, 2018. Pakistanis started casting votes in the country's one-day general elections commenced on Wednesday morning, which would elect the members of the National Assembly, the lower house of the country's parliament, and of the four provincial assemblies. (Photo: Xinhua)

The polling started at 8:00 am local time Wednesday and continued uninterrupted up to 6:00 pm local time. Almost all major parties requested the ECP to extend the polling time for one hour, but was rejected by the election body.

However, the people inside the premises of the polling stations before the door closing time are allowed to cast their votes, the ECP official said.

Out of the 272 seats of the 342-member National Assembly, the lower house of the country's parliament, elections took place on 270 seats as polls were postponed on two seats due to multiple reasons, including the death of a candidate.

A huge turnout of voters was observed across the country, but heavy rains in some areas also affected the turnout, local media reported.

Counting started at the polling stations where polling process has been completed. However, the ECP has forbidden all organizations including media houses from announcing the result of any polling station before 7:00 pm local time.

Pakistan's lower house has a total of 342 members, of which 272 are directly elected by the people, whereas 60 seats are reserved for women and 10 for religious minorities. The reserved will be allocated to the political parties according to their proportional representation in the house.

A political party or a coalition must secure 172 seats to obtain and preserve a majority in the house and form the government for the next five years.

According to the ECP, over 105.95 million voters registered in the country, including 59.22 million male and 46.73 million female voters, to cast their votes. Overall 83,307 polling stations were established across the country, out of which 17,000 were declared as sensitive.

The Pakistani Army deployed 371,388 troops at all the polling stations to assist around 450,000 personnel from the police and other law enforcement agencies. It was the largest deployment for any election in the country's history, according to the army.

To facilitate the voters, the National Database and Registration Authority issued 650,000 computerized national identity cards over the past five days.

Apart from these parties, several dozen other parties are also taking part in the elections.

Over 30 people, including nine security personnel, have reportedly been killed and over 100 others injured in bomb attacks and firing incidents in different parts of the country on the election day.