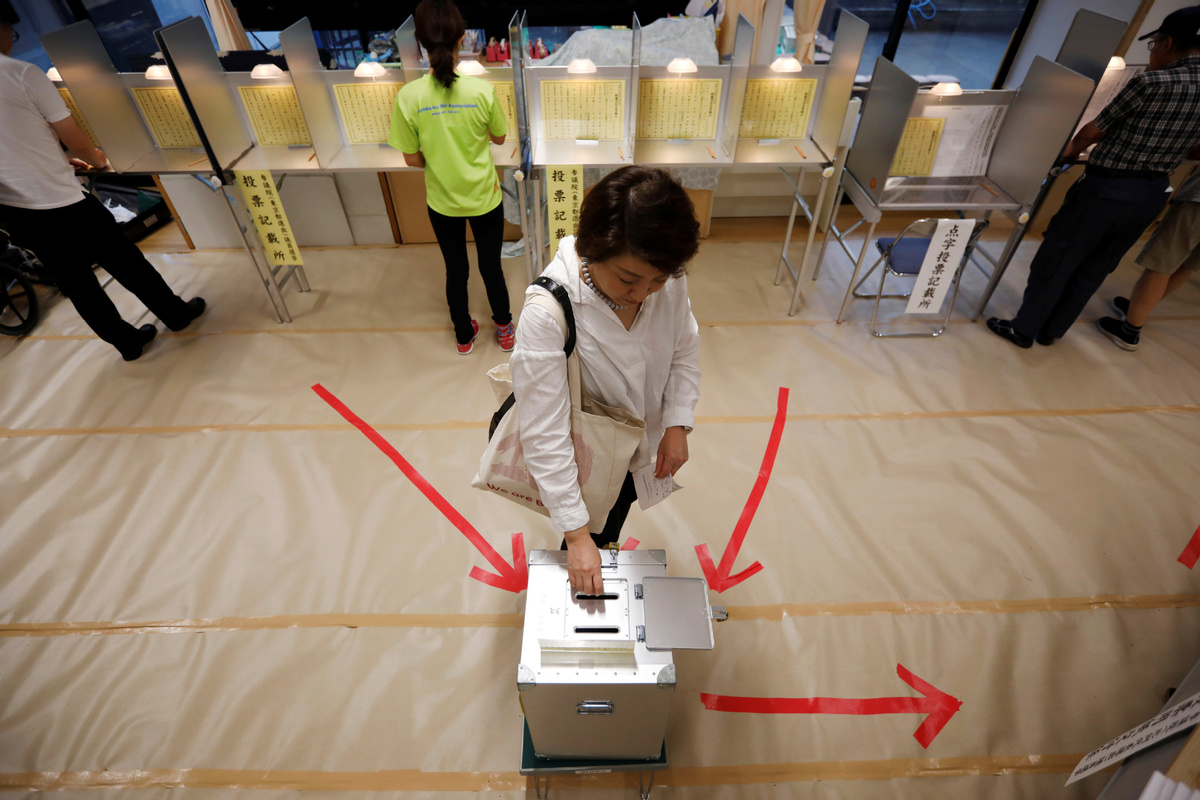 A voter casts a ballot at a voting station during Japan's upper house election in Tokyo, Japan July 21, 2019. (Photo: Agencies)

TOKYO - Voters across Japan began casting their ballots on Sunday in the upper house election, which is expected to be a barometer of public opinion on Prime Minister Shinzo Abe's six and a half years in power.

Voting is underway at around 47,000 polling stations nationwide from 7:00 am local time and will last until 8:00 pm local time. Officials will start tallying the votes as soon as the voting ends.

The results will likely be announced by early Monday, with voter turnout closely watched particularly among young people.

Members of the upper house serve six-year terms, with about half the seats up for grabs every three years. Due to electoral reform, the number of seats in the upper house will increase by six to 248 in 2022. Of the six, three will be added this time to bring the total seats to 245.

In Sunday's election, a total of 370 candidates are vying for the 124 seats up for grabs.

Abe has said his victory line for his Liberal Democratic Party and its coalition partner Komeito is to maintain a majority, or 123 seats, in the 245-seat chamber. Holding 70 of the seats in the uncontested half, the coalition needs to win 53 seats to keep control of the upper house.

To hold a stand-alone majority in the upper house, the LDP needs to win at least 67 seats.

Abe has stressed the need for stability during the campaign, saying "the biggest issue to be debated at the upcoming election is whether we want to accelerate reforms befitting a new era under political stability, or slide back into an era of chaos."

The focus will be on whether the ruling parties and others who advocate constitutional reform can pick up 86 seats to get a two-thirds majority. Abe would need such a majority in both upper and lower houses to hold a national referendum on a constitutional amendment.

Abe's career goal, before and through his two tenures as prime minister, has been to revise the war-renouncing Article 9 of the supreme law, which bans the maintenance of war potential and the use of war as a means of settling international disputes.

Those opposed to the move, however, believe that such a revision will be used to bolster Japanese forces and their international footprint, in contrast to the pacifist stance of the constitution.

Other key platform issues include hiking the consumption tax and the state's pension system.

The government is preparing to hike the consumption tax to 10 percent from the current 8 percent in October after postponing the plan twice. However, the move triggered a public backlash because previous increases in 1997 and 2014 were followed by serious economic downturns.

During the campaign period, the LDP and its junior coalition partner Komeito said the tax hike is necessary to be used in expanding child-care support as promised. Opposition parties are against the tax increase, saying their focus is on protecting households.

With the population rapidly aging, the pension system is also at the heart of the election campaign.

Opposition parties have been rattled by the government's handling of a pension report that revealed that under the current system, an average retired couple, if they live to be 95 years old, would face a shortfall of 20 million yen (184,000 US dollars).

Japan's Finance Minister Taro Aso has said the government refused to accept the report from a panel of experts formed by the Financial Services Agency, which he oversees, as its findings were not in line with the government's position on the pension system, which it believes functions effectively as the basis of finances during post-retirement years for households.