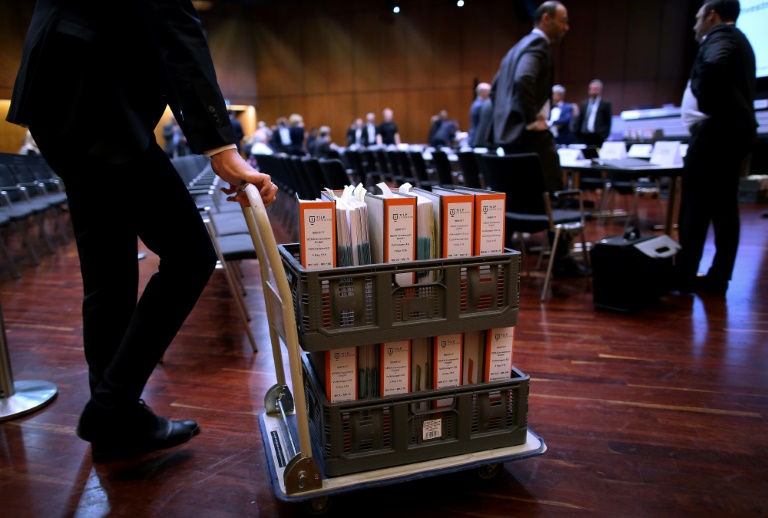 The hearing was packed with around 50 lawyers from VW and its shareholders and dozens of plaintiffs and curious locals. (Photo: AFP)

The first major German court case against Volkswagen over the "dieselgate" scandal that has shaken up the car industry opened Monday, as investors pursue the world's largest automaker for billions in compensation.

Packed with around 50 lawyers from Volkswagen and its shareholders and dozens of plaintiffs and curious locals, the hearing had to be moved to a convention centre to fit all of the attendees.

The shareholders' "model case" against VW is supposed to clear up 193 questions common to some 3,650 claims totalling around 9.0 billion euros.

At issue is a 40-percent plunge in Volkswagen stock over two days in September 2015, which wiped billions off its market value.

Days earlier, US authorities accused the group of using the defeat devices -- engine software designed to cut harmful emissions during regulatory tests, only to allow them to rise again during on-road driving.

Investors say they could have avoided painful losses had executives -- who are legally obliged to share promptly any information that could affect the share price -- informed them sooner of the cheating.

On the first day of proceedings, the court said claims dating before July 2012 may have to be excluded because of statute of limitations rules, although no final decision was made.

But representatives for the plaintiffs were undeterred, saying that would still leave around two thirds of their cases on the table.

"The door is open from July 10, 2012, and we are confident our clients will get their money," said Andreas Tilp, a lawyer representing investment fund Deka.

So far, dieselgate has cost VW more than 27 billion euros in fines, vehicle buybacks and recalls and legal costs, mostly in the US

Judges are expected to take at least until next year to rule.

Deka lawyers argue that board members knew about the fraud and should have revealed it between the offending software's first deployment in 2008 and September 2015.

For its part, VW blames a handful of engineers acting without authorisation for the scheme, and says the information it had before the American authorities intervened was not significant enough to warrant warning capital markets.

But presiding judge Christian Jaede said the court would consider whether the start of US investigations into the unusually high emissions from VW diesels in the spring of 2014 "could have" warranted a message to shareholders.

At the centre of attention in the court case will be Martin Winterkorn, the engineer who claimed to know "every nut and bolt" of Volkswagen's entire range of models and ran the company as chief executive from 2007 to 2015.

VW said in 2016 that Winterkorn -- who stepped down after the scandal became public -- was sent a "memo" in 2014 highlighting emissions irregularities in the manipulated EA189 engine, without confirming whether he ever read it.

Backed by government tax incentives, German and other European carmakers bet big on diesel in the 1990s and 2000s as a lower-carbon alternative to petrol engines.

But the "dieselgate" scandal has revealed the flipside of the technology: nitrogen oxides (NOx) emissions that can be harmful to health.

Volkswagen and other manufacturers remain mired in legal woes over the scandal.

Meanwhile, the fallout for German society has been wide-ranging.

The EU has toughened emissions testing with a new procedure known as WLTP, which came into force this month.

Car companies are hoping a flood of new battery-powered vehicles will help meet tighter fleet-wide CO2 targets that bite from 2021, rather than ever-more efficient diesels.

And courts are increasingly pressuring German cities to clean up their air, with a diesel ban on two major roads in Hamburg and city-wide exclusion zones for older vehicles coming in Stuttgart and Frankfurt.

Consumers have reacted to the prospect of more bans by shunning diesel vehicles, sending its share of the new car market plunging from 46.5 percent in August 2015 to 32.6 percent last month.

Potentially even more terrifying for carmakers is a law allowing collective class action-style lawsuits that Berlin aims to pass before the statue of limitations runs out.

"Some two million owners could benefit," Justice Minister Katarina Barley said in May.