WORLD Wait extends into 2018 to determine fate of young immigrants

Wait extends into 2018 to determine fate of young immigrants 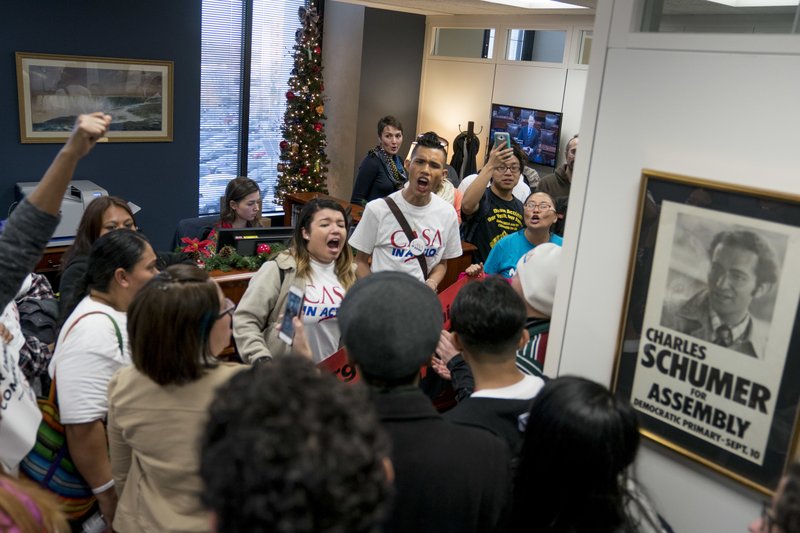 The fate of hundreds of thousands of young immigrants living here illegally and facing deportation will be decided next year, a Republican senator says.

Arizona Sen. Jeff Flake said Wednesday he received assurances from Majority Leader Mitch McConnell, R-Ky., that the Senate will vote in January on bipartisan legislation. The promise came in talks with the GOP leader on Flake’s backing for the tax bill.

“While I would have written a much different bill, this bill lowers the corporate tax rate in a manner that makes us globally competitive,” Flake said in a statement. He said McConnell has made a commitment for a vote on the measure now being negotiated.

The White House and lawmakers are working out details of the bill, but Flake said in an interview with The Associated Press that the legislation will broadly address border security, asylum policy and a fix for certain young immigrants.

At issue is President Donald Trump’s decision to rescind an Obama-era executive order that created the Deferred Action for Childhood Arrivals program, which gave protected status to about 800,000 of those immigrants who are in the United States illegally. Many were brought here as infants or children and have known no other country except the U.S.

In scrapping the order, Trump gave Congress until March to come up with a legislative solution.

Flake said he and other lawmakers have worked with White House chief of staff John Kelly and other administration officials. Kelly outlined a list of White House priorities at a meeting on Tuesday and pledged to present a detailed list by Friday of border security and other policy changes it wants as part of a broader deal on the immigrants, Flake said.

“The White House is committed to moving forward in good faith,” he said, calling the administration’s plans “eminently reasonable and well thought-out.”

Flake, a frequent Trump critic, said he has been impressed by Trump’s commitment to protect the young immigrants.

“The president’s instincts are better than the advice he sometimes gets,” Flake said. “He says he wants to protect these kids. I believe him.”

Democratic Sen. Dick Durbin, who wanted to find a remedy this year, said in a statement that he was thankful for Flake’s efforts to keep the measure alive. But Durbin did not immediately agree to a January timetable.

While Flake is confident the Senate will vote, it remains unclear whether the House will back such legislation. In 2013, the Senate supported a bipartisan bill overhauling the immigration system and providing a path to citizenship for some 11 million living here illegally. The measure died in the Republican-led House.

House Speaker Paul Ryan, R-Wis., has said that deporting the young immigrants is “not in our nation’s interest.” Ryan has said any immigration solution must include border security measures, though he said a wall along the entire U.S.-Mexico border, which Trump has urged, doesn’t make sense.

Flake also played down the idea of a wall encompassing the 2,000-mile long border, saying “the wall is kind of a metaphor for border security.”

In reality, the border measure will include fencing and other barriers, including sensors and other high-tech security techniques, he said.

Under the DACA program, the young immigrants get two-year permits that let them work and remain in the country. Trump rescinded the program this year, but he let immigrants renew their documents if those documents were set to expire between September and March.

The government says 132,000 of the 154,000 eligible renewals applied before an October deadline, leaving more than 20,000 without any protection from deportation.