WORLD Wall of hope rises up for Kenyans

Wall of hope rises up for Kenyans

Editor's note: People-to-people exchanges are deepening the connections between countries participating in the Belt and Road Initiative. This column celebrates the efforts of those working toward a shared future. 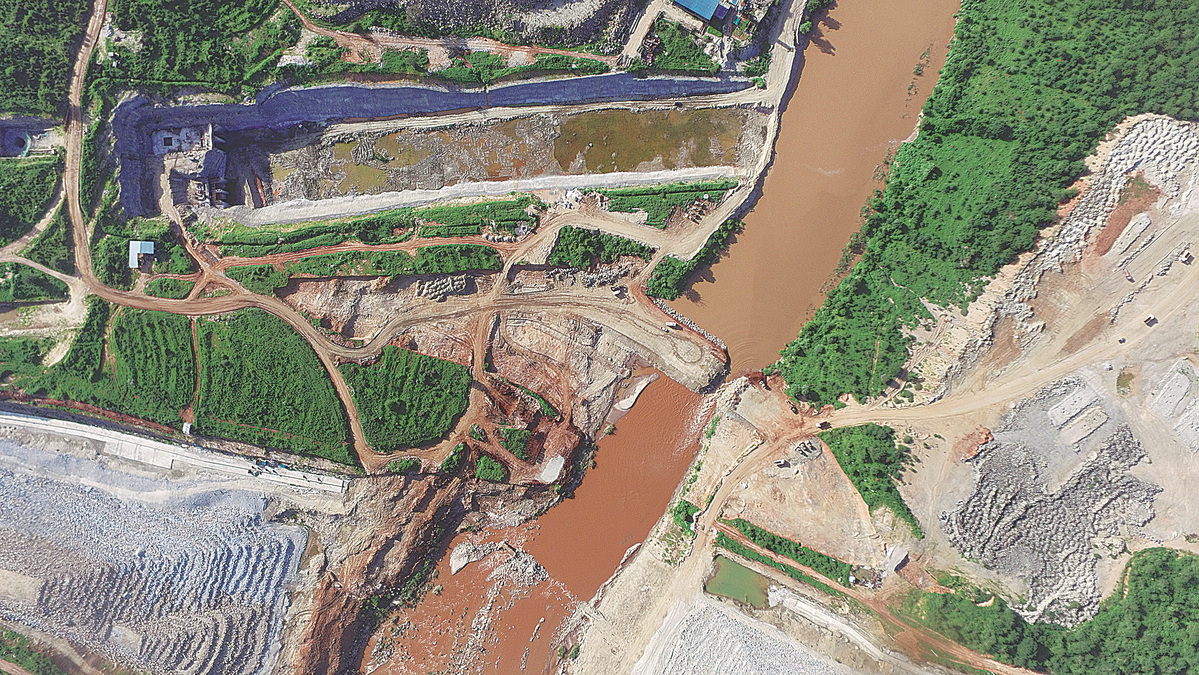 Construction of the Thwake Dam, as seen on Dec 30, is proceeding at a site south of Nairobi. Upon completion, the dam will provide Kenyans with power and water. TANG YAZHOU/XINHUA

With Kenya in the grip of persistent droughts, many in the East African nation are looking with hope toward a major dam that is being built by a Chinese company some 160 kilometers south of the capital Nairobi.

Construction of the first phase of the Thwake multipurpose dam is nearing completion, with three other phases in the project scheduled to follow. With a dam wall height of 80.5 meters, the project being undertaken by China Gezhouba Group will have a storage capacity of 688 million cubic meters.

Recurring droughts have resulted in severe water shortages and worsening food insecurity in eastern parts of Kenya, with more than 2.9 million people in the region now needing food aid, according to United Nations data.

The dam is expected to ease these problems by providing water for domestic use and irrigation while generating hydropower to be added to the national grid. Along the way, the project has been creating plenty of jobs for Kenyans.

On completion, the Thwake Dam, which is being funded by the African Development Bank to the tune of $693 million, will be the largest water conservation and hydropower project in Kenya.

It also stands out as yet another example of cooperation in Kenya under the China-proposed Belt and Road Initiative.

Faith Mwikali, an environment officer with China Gezhouba, said the project was approved in 2018 and construction started the following year. The works had been earmarked for completion by July this year, but the schedule was delayed by the disruptions arising from the pandemic.

"The restrictions in 2020 made it difficult to source for necessary materials and led to a reduction in manpower since people had to observe social distancing," Mwikali said. "However, since the restrictions were lifted, we have increased the number of employees and we are currently working day and night to ensure we deliver the project by the end of the year.

"On completion, the dam will add 20 megawatts of electricity to the national grid. Some of the electricity generated will also be used to pump the water to Konza City, an upcoming technopolis being constructed by the government nearby," said Mwikali, referring to a so-called smart city that has been dubbed a future Silicon Savannah.

Mwikali said the second phase of the project will be focused on electricity generation. The third phase will see works carried out to supply the dam's water to the counties of Kitui, Machakos and Makueni. In the fourth phase, large irrigation works will be established downstream, providing employment opportunities and ensuring food security, Mwikali said.

Francis Muema, another manager at the Chinese construction company in Kenya, said the project has been noteworthy for enabling the transfer of skills to Kenyans.

"We have offered opportunities for graduate trainees who get an opportunity to rotate in most of our departments as they get on-the-job training," Muema said. "Most of our Chinese staff only play a supervisory role and form less than 1 percent of our staff. In addition, they are training local supervisors and foremen who work hand in hand with the Chinese expatriates."

Mwikali added that since the project's inception, it has generated many jobs for Kenyans, and they make up 99 percent of the workforce. Businesses in the area have also benefited, with the local sourcing of the construction materials. Then there are the subcontractors that have picked up work throughout the construction.

More than 1,350 Kenyans have gained work as the dam takes shape, providing respite to thousands of households that had struggled to make ends meet during a time when millions in the country lost their jobs because of the pandemic restrictions.

"During the construction of the dam, the neighboring community has also benefited because China Gezhouba Group Company has constructed boreholes, renovated hospitals, planted trees and constructed classrooms for several schools," Mwikali said.

Describing herself as an environmentalist, Mwikali speaks of her pride in the way that the company has been supporting the goal of clean-energy production as a way of mitigating climate change. Even the electricity being generated for use at the construction camp is produced through solar energy, she said.

Steven Mwangi, a foreman in the company's machinery department, said he has long been a beneficiary of the Chinese investment pouring into Kenya, having started work with China Gezhouba when it began building another major infrastructure project, the Northern Collector Tunnel in Murang'a County. These types of projects are very beneficial to Kenya's economy, he said.

The tunnel, funded by the World Bank, is Kenya's longest, and is set to harness the floodwaters from three rivers in Murang'a County and, in doing so, will increase the volume at the Ndakaini Dam, the main water source for Nairobi.

"This Thwake Dam project has helped locals get job opportunities because its location is removed from the nearest town," Mwangi said. "Since the construction started, both skilled and unskilled people from the area have been given an opportunity to earn a living by working at the site. We encourage our unskilled workers to show interest in roles like handling the machinery in order to advance their skills."

In response to the recurring droughts, with the dried-up wells, lost pastures and dead livestock, the government plans to set aside more than 40,000 hectares of land downstream from the dam to enable the irrigation works under the project's final phase. This will promote not just food security but also wealth creation through light industries and value-added agricultural production in line with the aspirations of the government's development agenda, the dam's backers say.

During a tour of the project in March, representatives of the African Development Bank expressed their satisfaction with China Gezhouba's planning, design, and development of the key components of the project.

"Constructing a dam of this size will significantly boost the development of this semiarid region," Osward Chanda, the bank's acting director for water development and sanitation, said during the tour. "There is notable progress made in developing designs for hydropower and transmission and irrigation development downstream. As a bank, we are studying them and committed to funding the project to completion to benefit many people."

And as Kenyans await the completion of the dam's first phase, China Gezhouba has played its part in helping to increase the visibility of Chinese companies in the country as vital infrastructure demonstrates the value of cooperation under the BRI.