Stocks sold off broadly as coronavirus cases surged in New York City and around the United States over the weekend, dashing hopes for a more normal holiday season. Britain's leader said he would take more steps to slow the spread of Omicron if needed, after the Netherlands began a fourth lockdown and as other European nations considered restrictions.

"I think (the stock market) is down over COVID fears and how those fears may extend the continuing supply-chain problems and how that will impact profits ... for companies," Chuck Carlson, chief executive officer at Horizon Investment Services in Hammond, Indiana. 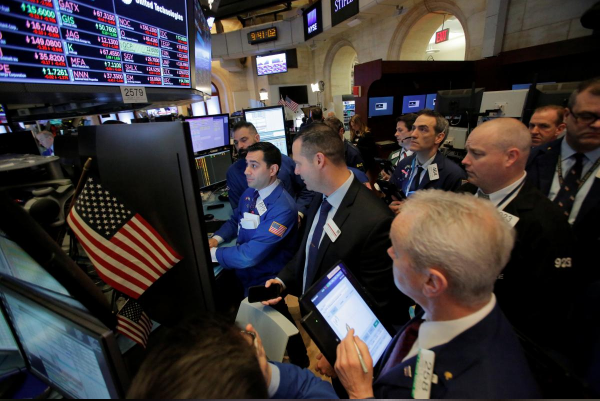 The benchmark S&P 500 traded below its 50-day moving average, a key technical level.

Economically sensitive S&P 500 groups such as financials and materials were among the biggest sector decliners.

In a further knock to market sentiment, US Senator Joe Manchin said on Sunday he would not support Biden's $1.75 trillion domestic investment bill, dealing it a potentially fatal blow.

Goldman Sachs trimmed its quarterly US GDP forecasts for 2022 after Manchin's comments.

The developments came as the Federal Reserve decided last week to end its pandemic-era stimulus faster, with the central bank signaling at least three quarter-percentage-point interest rate hikes by the end of 2022.

Investors have taken a more defensive stance so far this month, with sectors such as consumer staples, real estate and utilities leading gains.

"Given the strength of the market so far this year, in some ways you could see investors take some profits and look for greater clarity in the new year," said Michael Arone, chief investment strategist at State Street Global Advisors.