Walls, mud packs and monkey removal for Trump in India 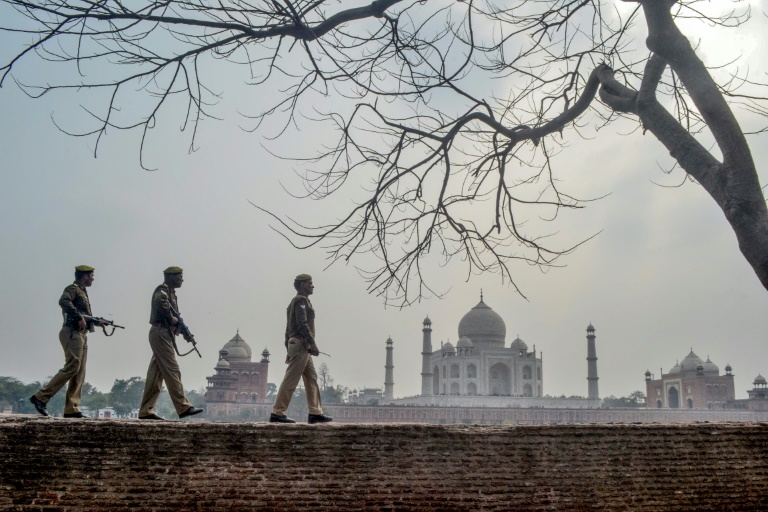 Preparations are in full swing at locations like the Taj Mahal for President Donald Trump's first official visit to India. (Photo: AFP)

US President Donald Trump makes his first official visit to India on Monday and work has been going on around the clock to spruce things up -- to the annoyance of some locals as well as monkeys.

The photo opportunity highlights of the 36-hour trip include a rally of 100,000 people at the world's largest cricket stadium and watching the sunset with First Lady Melania at the Taj Mahal.

A long wall has been hastily built, along the route in Ahmedabad in western India to the new Sardar Patel Stadium in order, locals believe, to hide a slum, although officials deny it.

Sardar Sarania, a resident of the slum, is disgusted at what he sees as Prime Minister Narendra Modi's attempt to conceal reality.

"So Modi has supposedly made everything good and there's development everywhere, right? But he's hid us behind here," Sarania told AFP.

"We're made invisible. So the gutter we live in, he (Trump) won't see us. That's why they're building this."

Scores of banners and hoardings with pictures of Trump, Modi and Melania Trump have been put up across the city, projecting the "Namaste Trump" rally as a historic event in US-India relations.

The route will be lined with thousands of people -- well short of the 6-10 million Trump says he has been told will attend -- as well as stages for performers and images of independence hero Mahatma Gandhi.

Ahmedabad officials are also keen to avoid a repeat of when then-US secretary of state John Kerry's cavalcade hit one of India's ubiquitous stray dogs during a 2015 visit.

The local Cattle and Dog Nuisance Control Department (CDNCD) has constituted a crack team to remove dogs and errant cows -- another common sight in Indian cities -- in a three-kilometre radius of the route.

A local NGO and the state forest department have also been roped in to keep birds and bands of monkeys out of Air Force One's way on the runway at Ahmedabad airport.

"In the past 10 days, we have caught 45-odd monkeys. They come in search of food," Raag Patel from the Nature Conservation Foundation said.

The captive monkeys are put in cages with food, sent to a "distant location" and released, Patel said.

Next stop for the Trumps will be sunset at the Taj Mahal in Agra, south of New Delhi, and here too workers have been busy making the world-famous Islamic mausoleum more beautiful still.

Back in the 17th century, some 20,000 labourers, sculptors, calligraphers and stone cutters, along with 1,000 elephants, took 16 years to construct the white marble monument.

Time, and also air pollution, have however taken their toll, turning parts of the Taj Mahal yellow, necessitating several rounds of treatment with coatings of mud packs that are then peeled off.

For the Trumps, the replicas of the graves of Mughal emperor Shah Jahan and his favourite wife Mumtaz Mahal -- for whom the Taj Mahal was built -- are getting the beauty treatment too, and for the first time.

"We completed the mud-pack treatment on Thursday," Vasant Swarnkar from the Archaeological Survey of India told AFP.

"It was already planned but the treatment was brought forward for Trump's visit."

Authorities have also released vast volumes of water into the Yamuna river flowing adjacent to the Taj in order to lessen the usual whiff of raw sewage and industrial effluent.

"This move may not make the Yamuna's water fit for drinking, but could reduce foul smell from the river," said Arvind Kumar, an engineer from the Uttar Pradesh Pollution Control Board.