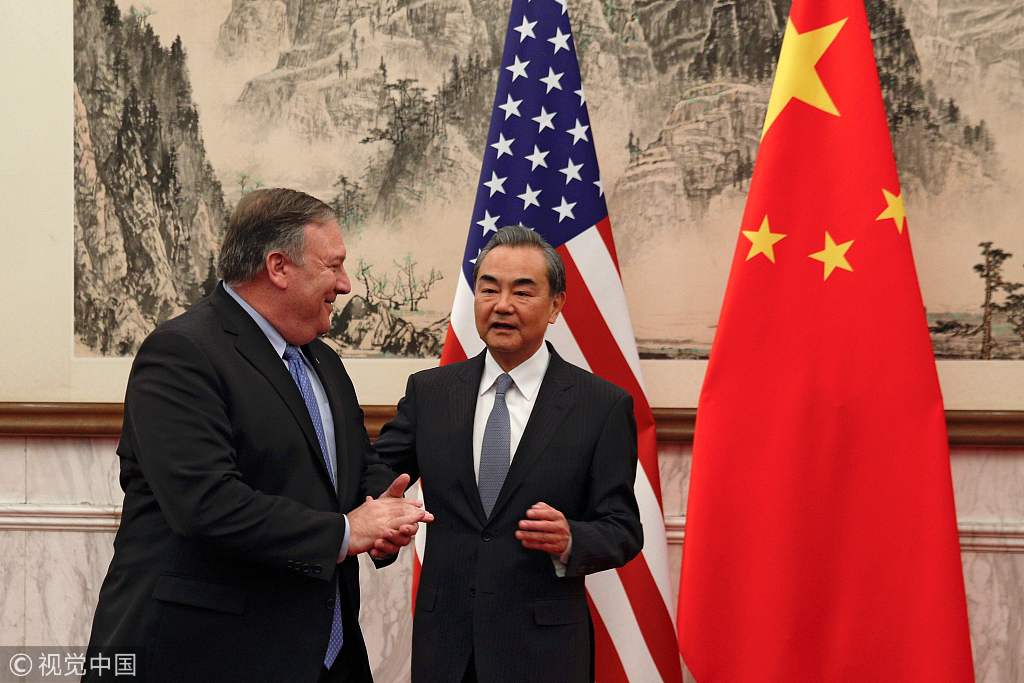 Chinese State Councilor and Foreign Minister Wang Yi on Monday told visiting US Secretary of State Mike Pompeo that China and the US should seek win-win cooperation, rather than conflict and confrontation.

The US escalated its trade friction with China, took actions that jeopardized China's rights and interests on the Taiwan question and unwarrantedly condemned China on its domestic and foreign policies, Wang said at the meeting, the Xinhua News Agency reported on Monday.

Stressing that these moves have directly impacted the mutual trust and cast a shadow on China-US relations, Wang urged the US to immediately stop making negative remarks.

Since China and the US established formal diplomatic relation in late 1970s, no senior US official had uttered "such harsh, aggressive and comprehensive criticism in so many areas as Pence did on Thursday," Ni Feng, deputy director of the Institute of American Studies under the Chinese Academy of Social Sciences, told the Global Times on Monday.

Many US political elites believe China is "the only rival that can challenge the US and shake its hegemony, and the US has to deal with the situation," said Diao Daming, an American studies expert and associate professor at Renmin University of China. China should abandon wishful thinking and prepare for long-term confrontation and frictions with the US, Diao told the Global Times.

"It is unwise to expect the US to make any concrete compromise in the short term," he noted.

"I know that during your visit, you also want to exchange views with the Chinese side on regional hot spot issues including the situation in the Korean Peninsula," Wang said, adding that this demonstrates as two major powers and permanent members of the UN Security Council, China and the US should strengthen communication and cooperation, so as to live up to the responsibilities entrusted by the international community.

Before arriving in China, Pompeo had visited Japan, North Korea and South Korea. At his meeting with Wang, Pompeo said the US hopes to keep and strengthen cooperation with China on the Korean issue.

Pompeo said that despite obvious differences on many issues between the two sides, the US does not mean to oppose China's development, and there is no policy to fully contain China, Xinhua reported.

Wang said cooperation must be supported by sound and steady bilateral ties, and he hopes Pompeo's visit will create positive outcomes.

Diao interpreted Wang's comment as suggesting that US-China relations have no foundation because "sound and steady bilateral ties have already been damaged by the US."

Resolution of the Korean Peninsula nuclear issue could lead to improved ties in the short term, but US hostility toward China won't fundamentally change, Diao said.

"If helping the US on the peninsular issue can really benefit China and the region, we can consider it, but China should not expect cooperation to lead to a concrete US compromise on the bilateral ties," Diao noted.

During their meeting Pompeo briefed Wang on his visit to North Korea, and said the US appreciates China's contribution in pushing the denuclearization of the peninsula, and the US hopes to maintain and strengthen cooperation with China on the issue. Wang said China supports direct dialogue between the US and North Korea, which must be based on mutual respect and accommodating each other's concerns, adding that China is willing to continue making unique and important efforts to resolve the issue.