Chinese State Councilor and Foreign Minister Wang Yi met with top officials from some African countries on Sunday ahead of the 8th Ministerial Conference of the Forum on China-Africa Cooperation (FOCAC) in Dakar, capital of Senegal.

During the conference scheduled for Monday and Tuesday, foreign ministers and representatives of the 54 member states will chart a joint response to COVID-19 and also the course for China-Africa relations for the next three years and beyond.

'China will continue to provide vaccines to Senegal'

Before the conference, Wang paid a visit to Senegal and met Senegalese President Macky Sall and his Senegalese counterpart Aissata Tall Sall on Sunday. 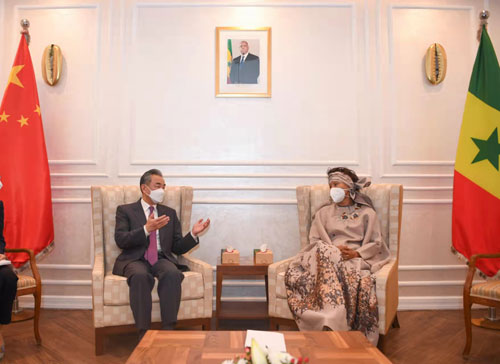 The president said the unfair part of the international order should be changed, adding that Africa's destiny should be in its own hands. He went on to say that Senegal expects China to continue to play a leading role in the international arena and help Africa achieve development and revitalization.

Wang said China sees Africa as a broad stage for international cooperation rather than an arena for competition among major countries. China will always be the most sincere and reliable partner for Africa's development and revitalization, he stressed.

China will continue to offer Senegal COVID-19 vaccines and enhance cooperation with Senegal in vaccine development and production as well as virus detection to help it overcome the pandemic as soon as possible, Wang said.

Wang said both countries advocate win-win cooperation instead of zero-sum games, and fairness and justice instead of bullying and hegemony. 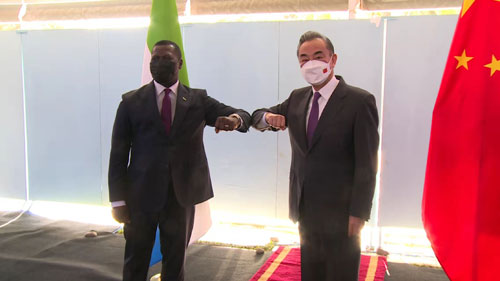 China supports Sierra Leone in playing a greater role in international affairs and is willing to work with the country to safeguard the common interests and development space of developing countries, Wang said.

He said Sierra Leone is willing to carry out mutually beneficial cooperation with China in infrastructure, agriculture and other fields, and welcomes Chinese enterprises to invest in his country.

Sierra Leone firmly supports the principle of non-interference in other countries' internal affairs, supports China's just position, and is willing to strengthen coordination and cooperation with China in multilateral affairs, Francis stressed.

China and Zimbabwe are 'good friends with common destiny'

Wang also met his Zimbabwean counterpart Frederick Shava on the same day and said China and Zimbabwe are "good partners and friends with common destiny." 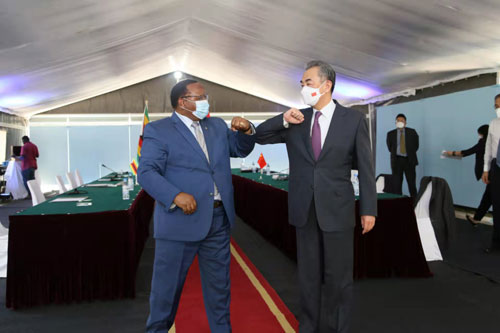 China supports Zimbabwe in exploring a development path that is in line with its own national conditions, and is willing to work with Zimbabwe to strengthen the docking of development strategies, fully explore the potential for mutually beneficial cooperation, and continuously expand practical cooperation, Wang said.

Shava said Zimbabwe appreciates China's adherence to the path of peaceful development and its important role in the cause of global poverty reduction and promoting the overall development of developing countries.

Zimbabwe appreciates China's support in helping it achieve economic transformation and will continue to work with China for mutual support, Shava added.

When meeting with Mozambican Minister of Foreign Affairs and Cooperation Veronica Macamo on Sunday, Wang pledged to strengthen mutually beneficial cooperation between the two countries.

Mozambique is an important partner of China in Africa, Wang said, stressing that China attaches great importance to the development of the bilateral relations.

According to Wang, political mutual trust between the two countries continues to deepen, and bilateral cooperation in various fields has achieved fruitful results.

Thanks to the joint efforts of the two sides, bilateral economic and trade cooperation has continued to grow despite the impact of the pandemic, Wang noted. 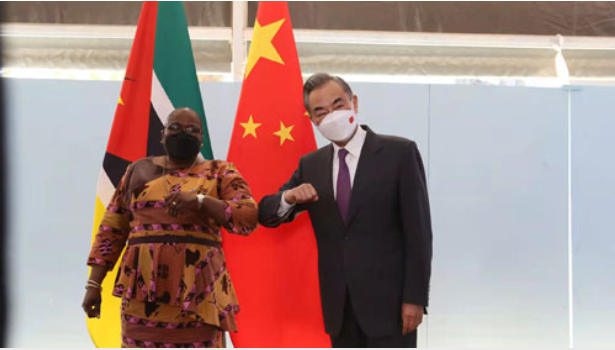 China is ready to strengthen mutually beneficial cooperation with Mozambique in such areas as infrastructure, agriculture and energy under the frameworks of the joint construction of the Belt and Road, FOCAC and the Economic and Trade Forum between China and Portuguese-speaking countries to help Mozambique achieve faster development, Wang stressed.

The Chinese foreign minister said he hoped that the two countries would take the meeting as an opportunity to promote the comprehensive strategic cooperative partnership between the two countries to achieve greater development.

Macamo warmly congratulated the Communist Party of China on the centenary of its founding, noting that her country stands ready to strengthen party-to-party ties and exchanges on state governance with China.

She said that Mozambique and China enjoy a profound traditional friendship, and the two countries have always stood firmly together, adding that the Mozambican people are deeply grateful to China for helping Mozambique achieve independence, and that China's support made Mozambique highly confident in its future development.

The foreign minister stressed that Mozambique firmly adheres to the one-China policy and resolutely supports China to safeguard its core interests. She noted that Mozambique stands ready to strengthen strategic mutual trust, deepen mutually beneficial cooperation, and maintain solidarity and coordination on international affairs with China.

The two sides also expressed the will to jointly work for a complete success of the 8th Ministerial Conference of FOCAC, so as to inject fresh impetus into China-Africa cooperation.