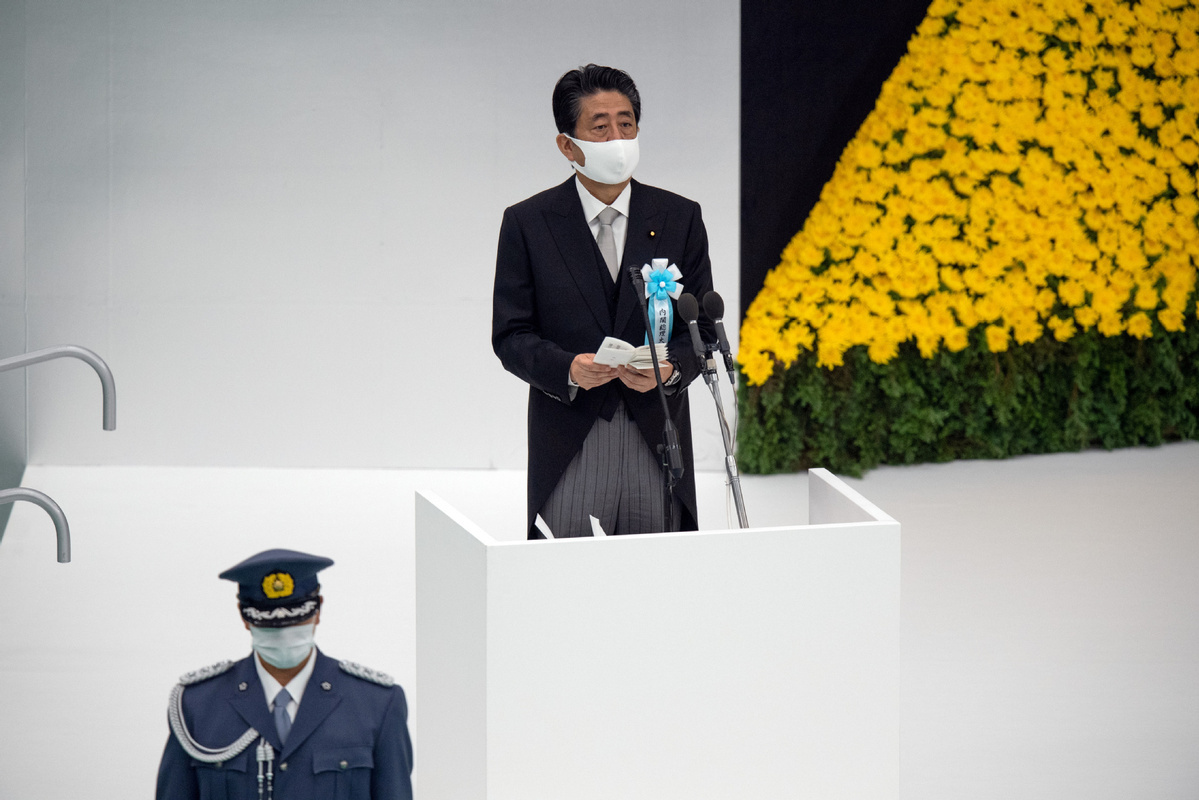 Japan on Saturday marked the 75th anniversary of its surrender in World War II, with Emperor Naruhito expressing "deep remorse" over his country's wartime actions, but Prime Minister Shinzo Abe made no word of apology for the sufferings of its neighbors.

In a much scaled-back ceremony due to the COVID-19 pandemic, Naruhito, Japan's first emperor born after the war, pledged to reflect on the war and expressed the hope that the tragedy would never be repeated.

"Reflecting on our past and bearing in mind the feelings of deep remorse, I earnestly hope that the ravages of war will never be repeated," Naruhito said, adding that he would follow in the footsteps of his father, who devoted his 30-year career to making amends for a war fought in the name of Hirohito, the current emperor's grandfather.

"Together, with all of our people, I would like to pay a heartfelt tribute to all those who lost their lives during the war… and pray for world peace and for the continuing development of our country," the Emperor added.

In contrast, there was no word of apology from Abe, who did not echo Naruhito's reference to remorse, but only gave thanks for the sacrifices of the Japanese war dead and had nothing to say about the sufferings of Japan's neighbors.

In a largely domestic-focused speech, Abe said the peace that Japan enjoys today is built on the sacrifices of those who died in the war. He also listed damage inflicted on Japan and its people, including the atomic bombings of Hiroshima and Nagasaki by the United States and the massive firebombings of Tokyo.

Since taking office in 2012, Abe has increasingly sought to whitewash Japan's brutal past by not acknowledging Japan's wartime hostilities in his Aug 15 speech. Before Abe, there had been a nearly 20-year tradition of apology and reflecting on Japan's responsibility in an event that was begun in 1995 by Japan's former prime minister Tomiichi Murayama.

'Clear cut with past' urged

Meanwhile, Abe on Saturday sent a ritual offering to Tokyo's Yasukuni Shrine, a symbol of Japan's past militarism, and four ministers from Abe's administration visited the infamous shrine the same day.

Defending his visit, Koizumi said that paying respects to those who made sacrifices for their country is natural.

"Whether to visit or send offerings, it equals the worship of Class-A war criminals, which means supporting the glorification of the war of aggression, and will seriously undermine Japan's postwar peace order," said Takakage Fujita, director-general of a civil group dedicated to upholding and developing the 1955 Murayama Statement.

Repeated Yasukuni visits by Japanese government officials "indicates that Japan has not made a clear cut with its militaristic past," said Yu Qiang, a professor at the University of International Relations in Beijing.

"Japan has long portrayed itself as the 'victim' of World War II, especially of the nuclear explosions, but made little reference to the historical background of the atomic bombings and its brutal aggression and colonial rule cast upon its neighbors. As memories about the history of aggression are fading, it is worrying that reflection on the war in Japanese society will get neglected," he said.