War of words escalates in Nigeria as rescheduled vote looms 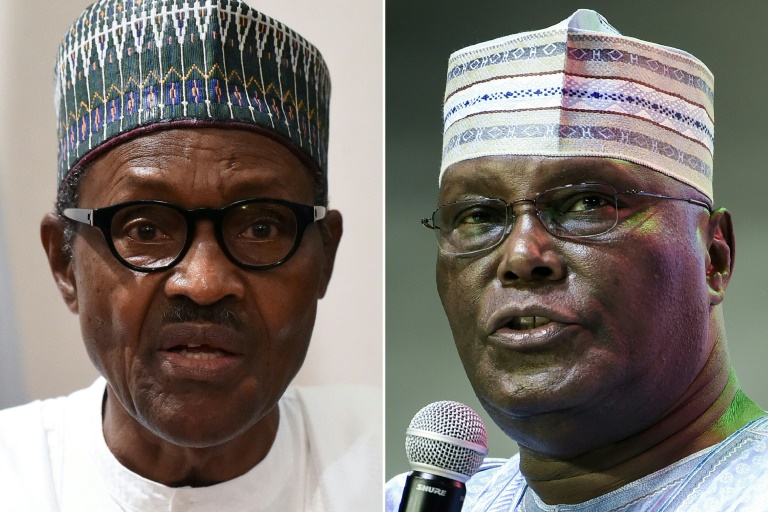 Nigeria's main opposition on Tuesday accused President Muhammadu Buhari of paying "lip service" to democracy, as a war of words escalated before rescheduled elections this weekend.

Presidential and parliamentary elections were called off just hours before polling on Saturday, with logistical difficulties blamed for the distribution of materials.

Since then, the tone of the two main parties has become increasingly combative, even after all sides agreed to hold peaceful elections and to accept the results.

The harder language prompted a warning from the chairman of the Independent National Electoral Commission (INEC), Mahmood Yakubu, and a call for calm.

"Please speak in a manner that does not contribute to heating the polity and the political atmosphere," he said.

"They need to moderate their rhetoric," he told AFP.

The Peoples Democratic Party (PDP) accused the ruling All Progressives Congress (APC) of trying to rig the vote, by using dead voters, foreigners and technological manipulation.

Both parties have claimed the other is in league with INEC. INEC itself denies any political interference.

Most controversial has been Buhari's revelation on Monday that he had ordered the police and military to be "ruthless" with vote-riggers, and anyone doing so risked their life.

Violent ballot-snatching has been a feature of elections in Africa's most populous nation and the comments drew the backing of APC supporters.

But PDP candidate Atiku Abubakar, a former vice-president, said Buhari's words were "a painful reminder of the era of dictatorship and military rule".

Buhari, 76, is a former army general who seized power in a coup in 1983. At the last election, he called himself a "converted democrat" and dropped the title "general".

Abubakar, who is still dogged by longstanding corruption claims, told senior PDP members: "I have always said that General Buhari is not a democrat.

"He's never been a democrat... It's lip service. He's more of a power-monger than a democrat."

He added: "It's quite shocking for any head of state to utter such words in a democracy and we will not accept it from General Buhari in this country."

Abubakar, 72, said a "pre-condition for free, fair, and credible elections is that the people are able to cast their votes without fear or violence".

The vote was also considered to be the country's most credible.

Abubakar told Buhari: "You owe it to our people to let them give their verdict in the same way you were elected.

PDP national chairman Uche Secondus earlier claimed that "over one million dead voters will vote in this election" and there had been a "coordinated approach" to illegally register foreigners from Niger and Cameroon.

He also alleged that NEC's IT system had been compromised "to change names and all sorts of things", and a vendor of electronic machines that "read" biometric identity cards, allowing people to vote, was an APC candidate.

"Nigerians know the fact that this government is in control of INEC," Secondus added, without giving more evidence.

Yakubu told reporters at a separate briefing that such a conflict of interest was "not possible" but did not address the other PDP accusations.

The election is the sixth in the 20 years since Nigeria returned to civilian rule after decades of military government and security has always been an issue.

Nigeria's most senior police officer, Mohammed Adamu, on Tuesday said anyone involved in disrupting the vote did so at their own risk.

"Ballot-snatching, ballot-buying, thuggery will never be allowed," he said after a meeting of security and intelligence chiefs with Buhari in Abuja.

INEC has blamed bad weather caused by dust from seasonal winds for disrupting flights delivering election material as well as sabotage, after fires at three of its offices.

Yakubu said political campaigning would end on Thursday evening, adding: "We are confident polling units will open on schedule."