WORLD Warning from embassy after students arrested for copyright breaches

Warning from embassy after students arrested for copyright breaches 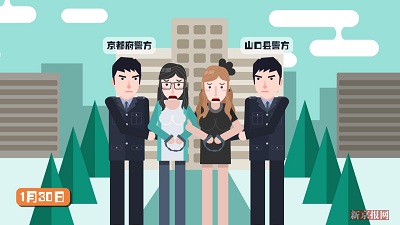 Five Chinese students were arrested in Japan on Wednesday on the allegation of copyright infringement, the Chinese Embassy confirmed.

The arrests were made by the police officers in Kyoto, Yamaguchi, Shizuoka, Mie and Shimane prefectures, local media reported.

The embassy issued a notice on Thursday, calling on Chinese nationals living in Japan to keep abreast of and abide by the country's laws.

Kyoto police said the five Chinese students translated Japanese manga, games and magazines on games into Chinese and uploaded them to Chinese websites for public viewing between January 2015 and January 2018.

The two have admitted that they were part of the group of individuals who translate and upload Japanese manga, games and magazines.

Japanese police said the group members were recruited online, adding that it was the first time that Chinese students of the group were arrested in Japan.

The Chinese Embassy said downloading or uploading materials such as pirated e-books, audio and video products, games software and photos is illegal.

Chinese nationals in Japan should not translate, release and spread works without authorization from their authors or copyright holders, which is copyright infringement even if it is not for the purpose of financial gain, it said.