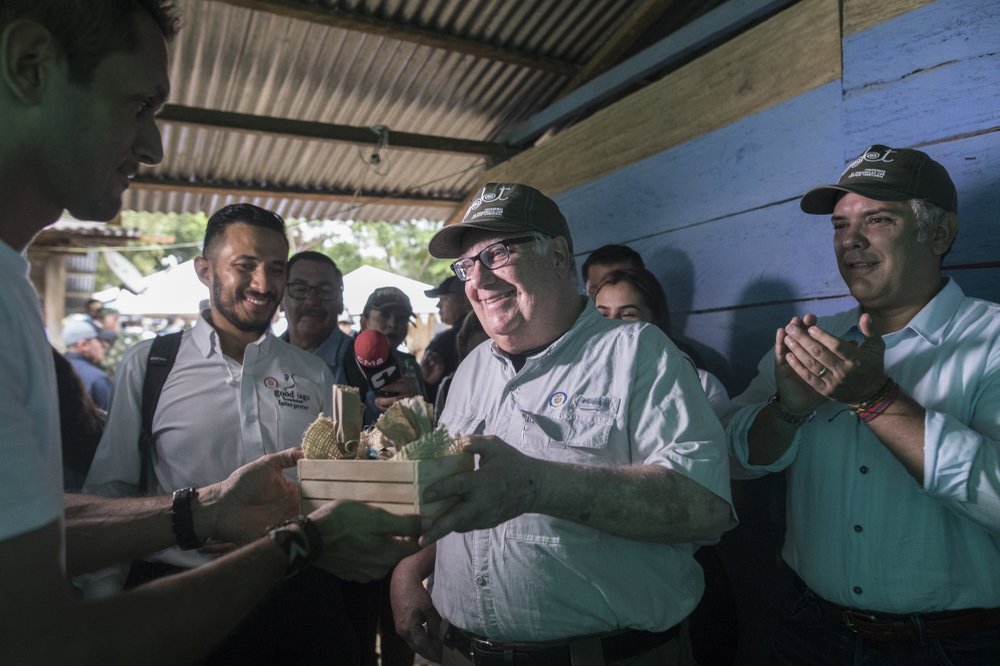 With Colombian military snipers in position, Howard Buffett descends from a helicopter and trudges through the wet grass in steel-toe boots chewed through by his dog’s teeth.

Waiting under a tin-roofed shack is a small group of cocoa farmers. They’ve never heard of multi-billionaire investor Warren Buffett, but after decades of neglect by their own government they’re grateful for the outstretched hand of his eldest son, who they refer to simply as “the gringo.”

“There’s a saying here: The less you know, the better,” said Rubén Morantes, his leathery skin and calloused hands a testament to a lifetime of tillage in one of Colombia’s most-dangerous territories, where outsiders are traditionally mistrusted.

For nearly two decades Buffett has crisscrossed the world giving away part of his father’s fortune to promote food security, conflict mitigation, and public safety. But his latest gamble is one of the most daunting yet: helping Colombia kick its cocaine curse.

Tibu has the second-largest coca crop in all of Colombia — 28,200 acres (11,400 hectares), according to the United Nations. Drug production, as well as violence, has skyrocketed in the area since armed groups filled the void left by retreating rebels who signed a peace deal with the government in 2016.

The Howard G. Buffett Foundation has committed to spending $200 million over the next few years to transform the impoverished municipality into a model of comprehensive state building. Plans include strengthening security forces and helping farmers secure land titles and substitute coca — the raw material for cocaine — with licit crops like cacao.

The first component is building 300 kilometers (185 miles) of roads to connect the municipality’s 37,000 residents for the first time with national and international markets. It’s a challenge made more difficult by lurking guerrillas who last year detonated a homemade bomb as army engineers were working on the road, killing five people and injuring several.

“The only way we have confidence that farmers can grow legal crops is if they can get those crops to market,” Buffett told farmers during a visit last month with Duque to La Gabarra, a rural outpost in Tibu. It was the first time any Colombian president had visited the blood-soaked hamlet.

The plan envisions subsidies and training for farmers as they switch crops, as well as helping them find buyers. It also aims to strengthen infrastructure for local law enforcement.

But some experts worry Buffett’s enthusiasm for speeding Colombia’s development is no match for entrenched corruption in rural areas run like political fiefdoms. There’s also the challenge posed by thousands of Venezuelan migrants who lack roots in the community and are being targeted for recruitment by criminal gangs.

A lot is riding on Buffett’s investment.

Not since the start of the US-led Plan Colombia two decades ago have so many resources converged on a single geographical area, said Álvaro Balcázar, who helped the government negotiate with the Revolutionary Armed Forces of Colombia the section of the peace deal focusing on illicit crops.

“There’s no precedent for something on such large a scale,” Balcázar said. “But the region is strategic for consolidating peace in Colombia.”

Like his father, Buffett, 65, has a reputation for folksy, Midwestern plain speech and self-effacing humor. Although he’s a three-time college dropout, his father wants him to succeed him as the non-executive chairman of Berkshire Hathaway, the $550 billion conglomerate that owns companies such as Duracell, Dairy Queen, and GEICO insurance as well as major stakes in leading US airlines and banks.

But he’s spent much of his adult life roving the world taking wildlife photos and writing books. He’s also a corn farmer and made headlines in 2017 by briefly serving as the sheriff of Macon County, Illinois, where he lives and his foundation is based.

He began exploring the world as a teenager on a trip to Soviet-controlled Prague in 1969 to visit one of the many exchange students his mother hosted at their home in Omaha, Nebraska. But his love of travel hasn’t been matched by culinary curiosity: In Catatumbo, he carried around a blue, insulated lunch pack containing his requisite PB&J sandwich and a Dr. Pepper.

As a philanthropist, his priority now is helping Colombia and El Salvador, whose fight against drug trafficking has a direct impact on the US. Between the two countries, he has already spent or committed $310 million, including the funding in El Salvador of a new police forensics center and a modern system to help the country’s prosecutors track criminal investigations.

As a volunteer police officer who logged 678 hours on patrol last year, Buffett has seen firsthand the human toll caused by drug addiction. A few weeks before traveling to Colombia, he and a partner were staking out a motel in Decatur, Illinois, at 1 a.m. when they arrested a man possessing crack. With him was a woman who said she had a drug problem, so Buffett paid for her to stay at the hotel two nights. Later, he referred her to a county rehab facility paid for with a gift from the Buffett Foundation in the hopes she would get help.

“These are people who need our help,” he said. “They’re not criminals.”

He has turned to Latin America after years of focusing much of his attention on Africa and especially Rwanda, where he works with the government on sustainable agriculture. He spent so much time at his farm in South Africa in the 1990s that he obtained permanent residency.

Buffett began working in Colombia in 2008 helping pop star Shakira set up schools in her hometown of Barranquilla. He’s also funded an army unit removing thousands of landmines strewn across former conflict zones. Leveraging his business contacts, he established a program to help around 100 families in southern Colombia switch from growing coca to producing high-quality coffee for Nespresso.

While an enthusiastic supporter of the 2016 peace deal, he has nonetheless struck a close relationship with Duque, a law-and-order conservative who rode into office attacking the agreement.

Duque has vowed to slash cocaine production in half by the end of 2023. Production of the drug skyrocketed after his predecessor — Nobel Peace Prize laureate Juan Manuel Santos — halted aerial eradication in 2015 due to health concerns over the herbicides used. But reaching that goal requires huge resources the government doesn’t have, as well as overcoming the indifference of urban voters who are removed from the conflict and have their own growing list of demands.

That’s where Buffett steps in.

The $200 million Buffett has pledged for Tibu is more than triple what the government has spent the past two years altogether on public works in 170 high-risk municipalities that are part of a rural development rescue plan mandated by the peace deal. The US Agency for International Development spends $230 million annually in Colombia, although its projects are spread across the country.

Beyond the big check, long-time partners praise the Buffett Foundation for being independent and nimble. It’s funded from an annual gift in Berkshire Hathaway stock by Warren Buffett, so it can take risks few are willing to attempt, development experts say.

“We’re accountable mainly to the IRS,” jokes Buffett, who sees setbacks like a venture capitalist who must eat crow before finding wild success.

“If you’re a charity, and you’re going to have your annual banquet to raise a lot of money, you can’t stand up there and tell people how you had these five failures and this one success. People aren’t going to write checks,” he said. “We’ll make a decision in five minutes if we know what we want to do.”

He is skeptical of the US government and United Nations, preferring not to work with either.

“The reason is that we can’t depend on them,” said Buffett, who said he was burned badly by USAID in 2011 when it abandoned a joint $10 million seed program for starving farmers in South Sudan just as fighting broke out in the world’s newest independent state.

“The bullets started flying and they pulled out. But it’s like, you’re in South Sudan, so of course, bullets are going to fly,” he said.

Instead, the foundation relies on partners known for delivering results quickly with slim overhead — a combination he says is hard to find among the “beltway bandits” profiting from US foreign aid outlays. One accompanying him to Catatumbo is Portland, Oregon-based Mercy Corps, which is helping farmers sort through Colombia’s bureaucratic maze to obtain land titles.

In a nod to his father’s reputation for common sense, Buffett seeks frequent counsel from the so-called “Oracle of Omaha.”

“He’s my sounding board, kind of like my conscience in a way,” Buffett said. “But he never asks, ‘Why are you doing that?’ or ‘Why you’re taking that risk?’”

In Tibu, after cracking a few jokes and planting a cacao tree, he seemed beside himself with joy even as the presidential committee hustled to quickly depart as heavy fog threatened to maroon them in the middle of nowhere.

“I know Emilio is very worried about leaving,” Buffett told the farmers through a translator, referring to Duque’s post-conflict adviser, Emilio Archila. “But I’m not, because there’s lots of chocolate here.”