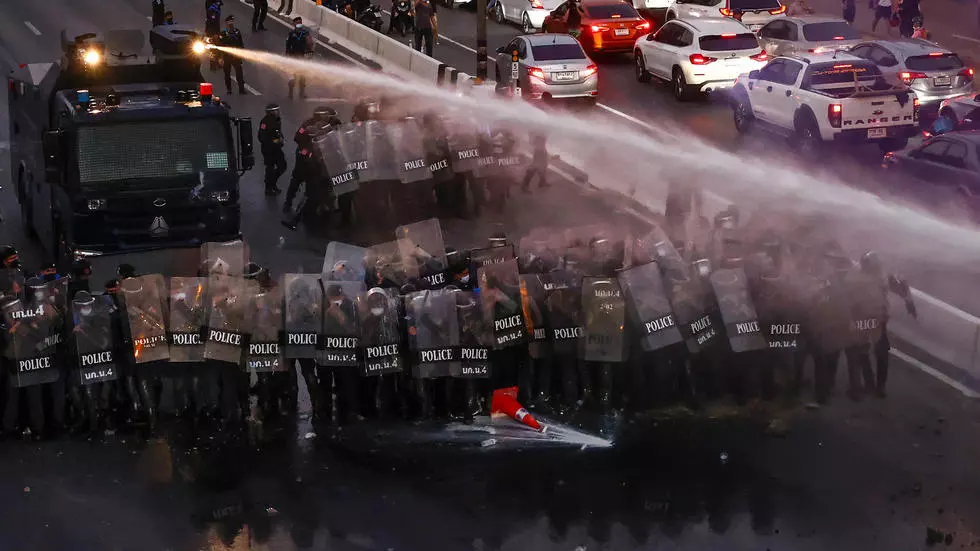 Police used water cannon and tear gas in an attempt to disperse the crowd. (Photo: AFP)

A youth-led protest movement calling for the resignation of Prayut Chan-O-Cha's government has lost steam in recent months following a second wave of coronavirus infections in the country.

But the recent detention of four prominent protest leaders on royal defamation charges has given it a shot in the arm.

The four are among 58 protesters facing lese majeste charges and the prospect of up to 15 years in jail per charge if convicted of insulting the monarchy.

An estimated 2,000 demonstrators marched from the major Bangkok intersection Victory Monument on Sunday to a nearby military barracks where Prayut lives.

Among the protesters were scores of Myanmar migrant workers rallying against the coup that ousted civilian leader Aung San Suu Kyi in the neighbouring country at the start of February.

Some Thai protesters marched wearing hard hats and carried red flags. They later pushed through shipping containers and barbed-wire barricades leading to a confrontation with riot police guarding the entrance of the barracks.

Scuffles broke out between riot squad officers and protesters, while some demonstrators were seen pushing a police truck.

"They are preparing everything, shields, baton, water with some chemical and rubber bullets," one protester at the front line told Thai media.

Amid the tense stand-off, officers used water cannon trucks and let off tear gas in an attempt to disperse the crowd -- the first use of non-lethal force at a Bangkok rally for several months.

Protesters shouted for water and saline as they were sprayed. Some wore raincoats while others held their bare hands in the air or raised three figures -- a symbol of resistance.

Thailand's pro-democracy movement kicked off last July and at its peak attracted tens of thousands of mostly young people.

Among the movement's demands are a rewrite of the army-drafted constitution and reforms to the monarchy -- a taboo-smashing demand in a country where the ultra-wealthy royal family has long been untouchable.