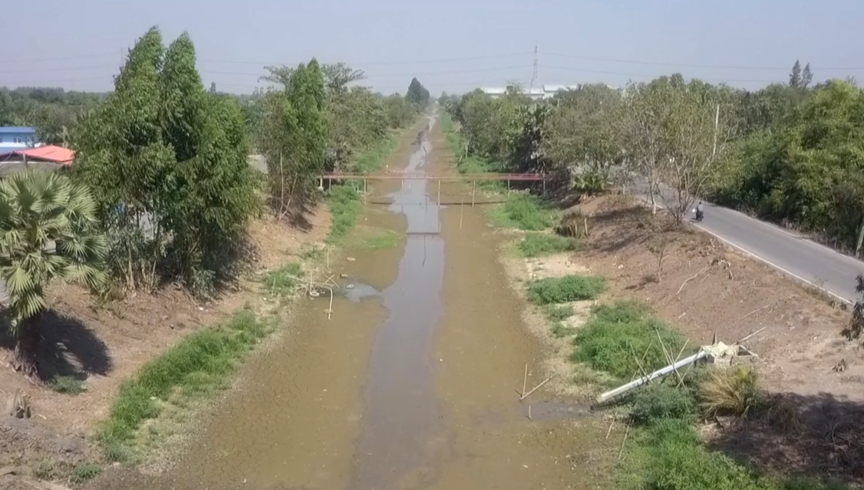 Canals with no water. Rivers running dry. These could be the clearest signs yet that Thailand is facing a drought crisis. The situation across nearly half of the country is predicted to get worse with the government warning 31 provinces to prepare for a severe drought.

the production of agricultural products including key exports of rice, tapioca and sugarcane, look set to decline. Experts say the prolonged and severe drought could cost the Thai economy more than 500 million US dollars.

Around Chachoengsao province, one of Thailand's rice-growing provinces, the sight of dry paddies and scorched earth are  evidence of the struggle of Naiyuthapong Chumchongand and many like him. He is a rice farmer. And like all farmers in this province, the sentiment is the same: This drought is as bad as they can remember. "Everyone here is desperate. Factories that are not facing a shortage like we are," Naiyuthapong says. "Farmers can not get water from anywhere. Imagine the cost of fertilizer and pesticides. We feel helpless."

The lack of rain has left a visible mark on the land and raised uncertainty among people. As rivers and dams dry up, groundwater emerges as a new battleground in the fight for water. Farmers in Chachoengsao are becoming increasingly desperate for water to irrigate their parched fields. So desperate, farmers are fighting over this precious resource.

Droughts are a norm in Thailand. The country has been battling with seasonal drought for decades, but experts say that this one could be the worst in decades. "We are facing the worst drought in 20-40 years. It will become more and more severe as we head into March, April and May when Thailand is hottest," Dr. Seree Supratid, Director of Climate Change Center at Rangsit University, says. "If we do not make preparations, it will be a very serious problem for the country."

This year, the dry season came earlier than usual and it is predicted to be a prolonged one. Fourteen large dams hold less than 30 percent of their combined capacity – a major concern as Thailand is only about two months into its usual dry season and reservoir levels are already low. This dry spell imperils crop production and rural demand in a nation where around 11 million people work in the agricultural industry.

But it is not only rural Thailand that should be concerned. Some residents of Bangkok can literally taste the risk of a potentially damaging drought. The capital's tap water has become saline as seawater pushes up the depleted Chao Phraya river, a source of much of central Thailand's water. "When rivers have less water, seawater will come in. When rivers have more water, seawater will be pushed out," Seree explains. "At the moment, the water in the river is very low, so we have a problem with salt intrusion. It will get worse."

Thai authorities are trucking drinking water to parts of Bangkok and urging residents to shower less.

But short-term measures may not be enough as experts believe that a hot and dry climate is now a new reality for Thailand, one that could potentially affect the entire population, considering the essentiality of water and the implications of who gets the "last drop."