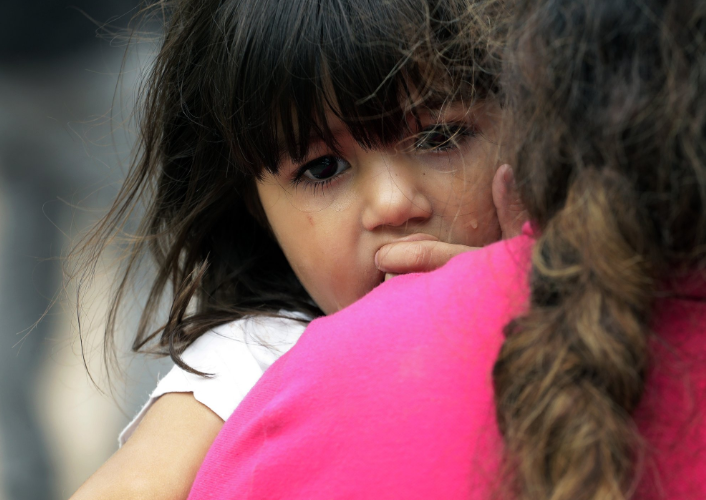 Hillary Herrera Cortez, 3, peers over the shoulder of her mother, Hildy Cortez Martinez, as the two wait for Border Patrol agents to process them at the U.S.-Mexico border near McAllen, Texas. Hildy Cortez said she named her daughter after former U.S. Sen. Hillary Clinton, March 14, 2019. (Photo: AP).

A mother cradled a crying toddler as she waited in line with 20 other women to shower. Dozens of fathers quietly held their children’s hands in an enclosure made of chain-link fencing.

While these families were held at an overcrowded Border Patrol processing center, a fresh wave of migrants crossed the nearby river separating the US and Mexico and waited for border agents to bring them to the same facility. One Honduran woman carried a feverish 7-month-old baby.

The cycle is repeated multiple times a day. Waves of desperate families are trying to cross the border almost hourly and entering an overtaxed government detention system.

The Border Patrol has become so overwhelmed in feeding and caring for the migrants that it announced plans this week to start releasing some families onto the street in the Rio Grande Valley to ease overcrowding in the processing center, providing the immigrants with a notice to appear at an upcoming court date.

“We have an unprecedented crisis upon us,” Robert Perez, deputy commissioner of US Customs and Border Protection, the Border Patrol’s parent agency, said in an interview.

The Border Patrol says it made about 66,000 apprehensions of people crossing the border illegally in February, including 36,000 parents and children, an all-time monthly high. 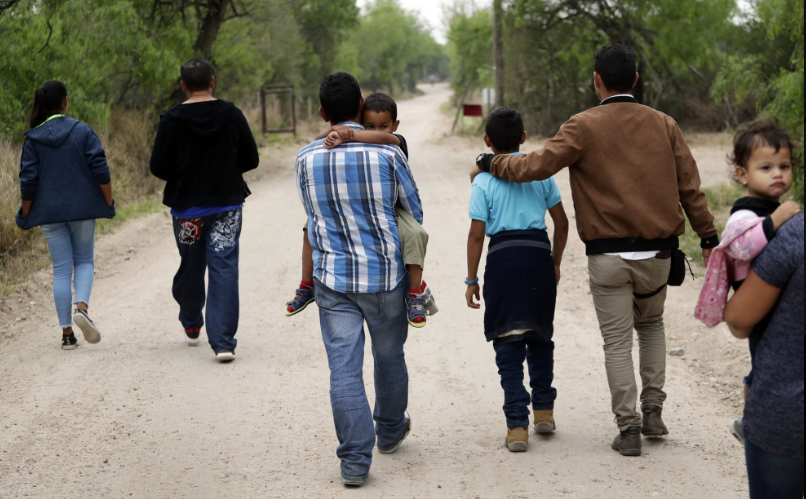 A group of migrant families walk from the Rio Grande, the river separating the US and Mexico in Texas, near McAllen, Texas, March 14, 2019. The migrants said they crossed the river in an inflatable raft and were hoping to be apprehended by the Border Patrol so they could be processed and released. (Photo: AP)

Immigration authorities expect the number of parents and children to surpass 50,000 in March during the traditional spring spike in migration and potentially reach 180,000 in May, according to two U.S. officials who were not authorized to speak publicly about internal documents.

The Border Patrol ordered expanded medical screenings after the December deaths of two children in its custody. The agency received $30 million to upgrade its South Texas processing center and additional funding to build a similar facility in El Paso.

The autopsy results for Jakelin Caal and Felipe Gomez Alonzo have not yet been released, but Customs and Border Protection has said both children were hospitalized after developing high fevers and nausea.

Children with fevers, colds and the flu arrive daily at the border with their parents and sometimes wait for hours for the Border Patrol to pick them up.

On a recent Thursday, Carmen Mejia’s 7-month-old, Lian, was feverish, one of four sick children in her group of 20. His mother had heard about Jakelin and Felipe before leaving her rural town in northern Honduras.

“It made me sad,” she said. “But imagine. I’m here, also looking for a future for my son.”

Mejia said she hoped to find work to support Lian and two older children she had left behind with her mother.

While she spoke, two more waves of people arrived. The group grew to around 50 before the Border Patrol could load everyone into vans and take them into detention.

Some migrants blamed extortion for forcing them to close small businesses. Others said gangs had killed close relatives and threatened to kill them. 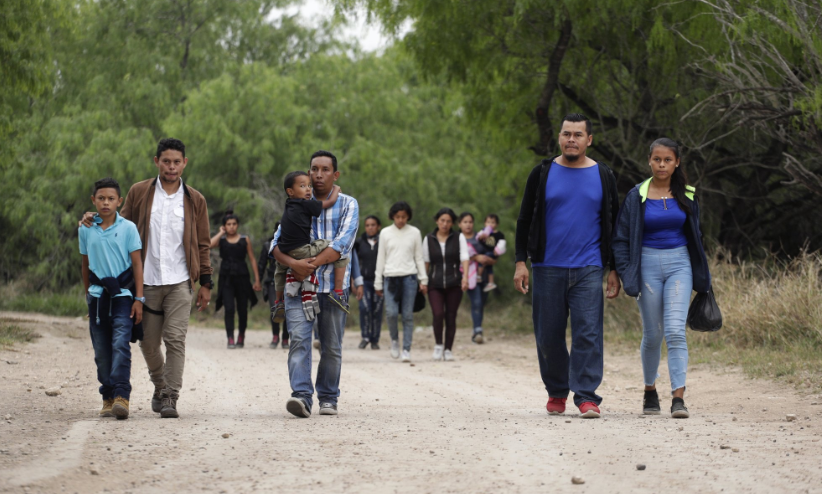 A group of migrant families walk from the Rio Grande, the river separating the US and Mexico in Texas, near McAllen, Texas, March 14, 2019. The migrants said they crossed the river in an inflatable raft and were hoping to be apprehended by the Border Patrol so they could be processed and released. (Photo: AP)

President Donald Trump’s administration says most adult border crossers are economic migrants who count on being released if they bring a child and seek asylum. Immigration agency officials have called for Congress to change laws that would allow them to detain more adults and children and deport people from Central America quicker.

Trump’s signature solution — and the reason for his declaration of a national emergency — is a border wall, especially in South Texas, where there are comparatively few barriers. But a border wall would not stop families who aren’t trying to evade immigration authorities. Those families typically stop after crossing the Rio Grande and wait to be caught.

The Associated Press visited the South Texas processing center where many migrants end up. It’s an old warehouse, with overhead lighting that stays on around the clock and chain-link fencing that forms large cages.

Detainees are issued mats and foil blankets to sleep on the concrete floor. Each detainee receives a medical screening.

Dozens of children waited on their own. Many were 10 years of age or older and kept separately from their parents, who are in another wing of the facility at the same time.

Some of the children waiting on their own talked among themselves. Others tried to sleep on mats under the glare of the lights, their foil blankets crinkling. 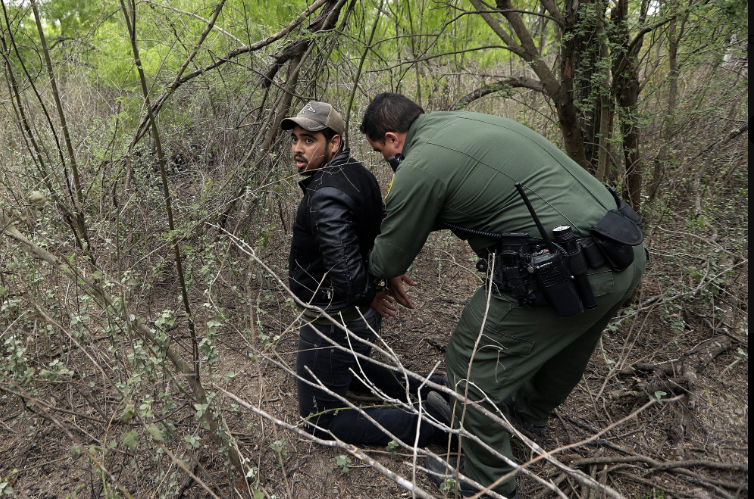 A Border Patrol agent apprehends a person suspected of having entered the US illegally near McAllen, Texas. While many adults crossing the border on their own in South Texas try to flee agents, most migrant parents and children wait to surrender so they can be processed and released into the US, March 14, 2019. (Photo: AP)

The facility received worldwide attention last June, during the Trump administration’s enforcement of a zero-tolerance policy that led to thousands of family separations. Around 1,100 people were detained at the facility then, many of them children who had been separated from their parents.

The facility opened in 2014 during the Obama administration to address another surge of thousands of unaccompanied teenagers arriving from Central America.

Now the processing center and other facilities in the sector deal with parents bringing young children and pregnant women who sometimes go into labor in detention.

“It isn’t meant for families,” said Carmen Qualia, an assistant chief patrol agent for the sector. “We’re set up for individuals.”

Agency guidelines require that parents are detained for no longer than 72 hours before being released or transferred to long-term detention centers with beds and more facilities. The average detention time for families late last week was about 60 hours.

Most families are eventually bused to a Catholic Charities facility in McAllen, where volunteers provide food and medical checkups before taking them to the bus station or airport.

The future of that facility is in jeopardy after McAllen city commissioners last month ordered Catholic Charities to vacate it by May, after complaints from neighbors.

But the Border Patrol is relying on the facility more than ever. While a few hundred people are sent there daily, immigration authorities dropped 800 migrants at Catholic Charities in just one day this week, leading to volunteers posting pleas on social media for donations and help.

Inside a small clinic behind the main building, Dr. Martin Garza listened to the heartbeat and lungs of 1-month-old Cesar Manuel Romero, cradled by his mother, 21-year-old Lily Romero of Honduras. Romero said she gave birth to Cesar on a bus as it passed through Monterrey, Mexico.

After crossing the border, Romero said they were taken to a smaller Border Patrol station — what she and other Spanish-speaking migrants often refer to as “la hielera,” or the icebox. She said another woman in custody loaned her a sweater so she could keep Cesar warm because agents had taken many of her belongings.

She said they were given water that was “nearly frozen.” Afterward, they were taken to the processing center and eventually released to Catholic Charities.

The Border Patrol says its facilities follow agency detention guidelines and that it investigates any complaints of mistreatment.

Garza said agents and medical professionals inside detention almost always diagnose major illnesses or injuries. But colds and fevers persist, along with conditions that aren’t obvious, he said.

“Infants are wheezing. Infants are having trouble breathing, and some of those things may not get picked up,” he said. 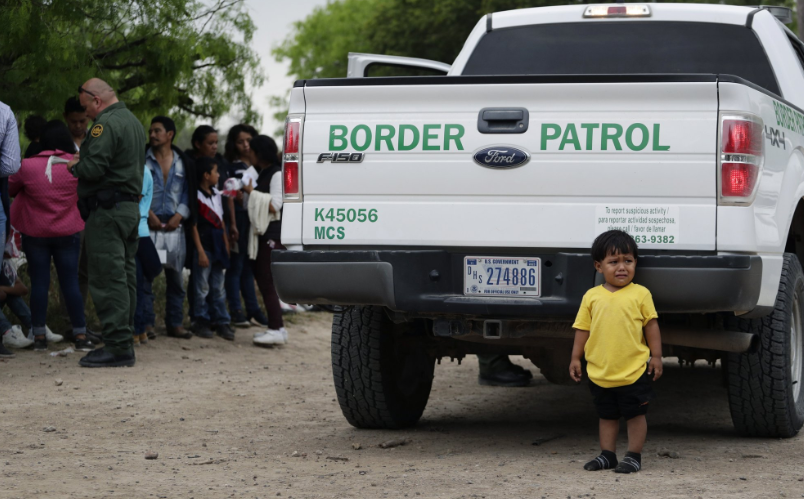 William Josue Gonzales Garcia, 2, who was traveling with his parents, waits with other families who crossed the nearby US -Mexico border near McAllen, Texas, March 14, 2019.. They are waiting for Border Patrol agents to check names and documents. Immigration authorities say they expect the ongoing surge of Central American families crossing the border to multiply in the coming months. (Photo: AP)